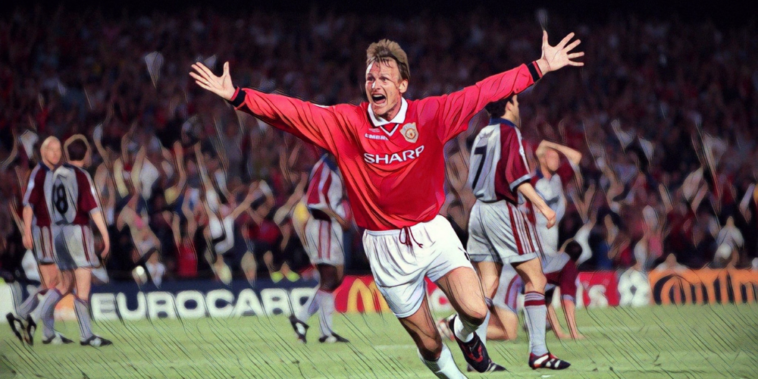 Teddy Sheringham’s career was one of both huge success and longevity, spanning more than two decades and including some of football’s greatest team and individual accolades.

The oldest ever Premier League goalscorer, his enduring quality ensured he is one of just a handful of players to have played in the league beyond their 40th birthday and amongst just a quartet to have done so outfield.

Sheringham’s subtle touches, intelligent movement and interpretation of space saw him become one of the best English footballers of his generation, his finest football having come during the nineties after an unorthodox route to the ultimate success.

Having failed to convince during trials with both Tottenham and Leyton Orient as a teenager, his first steps on the road towards the professional game began in non-league with Leytonstone and Ilford, where a brace in a clash against Millwall’s youth team saw The Lions take a chance on a 16-year-old Sheringham.

Handed a brief trial, he impressed sufficiently to earn a contract and made a handful of appearances for the side during the 1983/84 season. In need of further minutes and experience he was loaned out, first joining Aldershot for a difficult goalless spell in England’s fourth tier, before a period in Sweden helped Sheringham’s transition from boy to man.

He scored 12 goals in 23 appearances for Djurgården, winning the Second Division North League and adapting to the demands of a different culture and dressing room in Scandinavia.

Sheringham returned to London much improved and Millwall soon felt the rewards of their development plan, as the forward hit a career-best 16 goals across all competitions during the 1985/86 season.

The following season proved even more fruitful as Sheringham – alongside summer signing Tony Cascarino – fired Millwall to promotion from the second tier for the first time in their history, scoring 22 goals in 44 league appearances.

Millwall began the season in fine form and sat fifth at Christmas, and even with a late-season slump in results ended the campaign in tenth. The Lions lasted just two seasons in the top tier, however, and were relegated the following campaign.

Sheringham had shown that he could score goals at the highest level and after netting 38 across all competitions for Millwall in 1990/91 earned a return to the top flight, signing for Nottingham Forest.

Despite failing to settle in the East Midlands he impressed with his on-field performances for Brian Clough’s side, scoring 22 goals during his first season with Forest.

He began the Premier League’s inaugural campaign in similar fashion but, keen on a return to the capital, departed the City Ground just three games into the season, signing for boyhood side Tottenham in a £2.1m deal.

Sheringham shone in the colours of the north Londoners to finish his maiden campaign as the division’s leading scorer, winning the Golden Boot despite Spurs finishing the season in eighth.

Mid-table finishes became a regular occurrence across his time at White Hart Lane, with neither Terry Venables, Ossie Ardiles nor Gerry Francis able to build a side that could compete with England’s elite.

Spurs of that era were fluid and fun but lacked the balance to really produce consistent results, with Ardiles’ signings including Jurgen Klinsmann and Ilie Dumitrescu only adding to the north Londoners attack-minded approach.

Klinsmanns’ arrival resulted in one of the greatest strike-pairings in Spurs’ history as the German and Sheringham dovetailed delightfully in attack, the former winning the FWA Footballer of the Year in 1994/95 as the latter dropped deep and threaded passes forward.

Sheringham’s savvy around the final third was the perfect compliment to the clinical World Cup winner, who arrived at Spurs as a bona fide world star and one of the Premier League’s first pioneering imports.

Klinsmann’s stay lasted just a single season before a return to Germany with Bayern Munich, as Spurs continued to remain unconvincing and silverware proved elusive.

Sheringham’s excellence was finally recognised at international level as, aged 27, he made his England debut, later becoming the first-choice partner to Alan Shearer with England.

The nineties was a period in which the Premier League was home to an abundance of home-grown forwards, but the intellect and invention of Sheringham was deemed most suited to Shearer’s goalscoring prowess.

The height of their partnership came at Euro ’96, as the Three Lions reached the semi-finals of the European Championship on home soil. Sheringham had been criticised in the media for his role – alongside Paul Gascoigne – in a well-documented incident in Hong Kong pre-tournament, but enjoyed a superb campaign as Terry Venables’ team reached the last four.

Forming a fine understanding with Shearer, the two – dubbed the SAS – fired England into the latter stages, the zenith a 4-1 group stage thrashing of a heavily-fancied Netherlands side at Wembley in which Sheringham and Shearer each netted twice.

England’s run came to an end with a semi-final shootout defeat to Germany as silverware eluded Sheringham once more, and sensing opportunities were running out at club level he made the decision to leave Tottenham for Manchester United in 1997.

Sir Alex Ferguson had identified the forward as the ideal replacement for Eric Cantona, who had stunned the Red Devils with his sudden retirement.

Sheringham’s first season ended with 14 goals but no trophies as Arsenal won a domestic double, but the 1998/99 season proved one that remains impossible to forget.

Ferguson again entered the market for a centre-forward as Dwight Yorke arrived from Aston Villa in a club-record deal, the Trinidad and Tobago international adding to a striking contingent already including Sheringham, Andy Cole and Ole Gunnar Solskjaer.

Sheringham and Solskjaer were reduced to bit-part roles as Yorke and Cole formed an instant telepathy in tandem, but each enjoyed defining moments in arguably the greatest team season in English football history.

United reclaimed the title from Arsenal by just a single point, whilst the Red Devils progressed in both the FA Cup and Champions League in their pursuit of unprecedented history.

Sheringham came off the bench to open the scoring in the FA Cup final win over Newcastle, before once again starting amongst the substitutes as United face Bayern Munich in the European Cup final.

The Bundesliga side had dominated proceedings at Barcelona’s Camp Nou Stadium, leading through Mario Basler’s free-kick as the final entered the closing stages in Catalonia.

Called from the bench once again, a stoppage-time corner provided the Red Devils with a final chance to load the Bayern box, with goalkeeper Peter Schmeichel amongst the contingent of players desperately searching for a dramatic equaliser.

David Beckham’s delivery was only half-cleared, with Ryan Giggs firing a first-time scuffed effort back into the area. Waiting was Sheringham, who swivelled to guide the loose ball past Oliver Kahn and spark wild celebrations from the travelling Mancunians.

Bayern – distraught that the one hand placed on the Champions League had been snatched away – were on the ropes and United pushed on again to win another corner deep into the added time.

Another Beckham delivery was met at the near post by the rising Sheringham, whose flicked header was instinctively stabbed into the roof of the net by fellow substitute Solskjaer.

Having trailed the final as the game entered stoppage-time, the Red Devils were European champions for a second time and history had been made with treble success.

“I did not realise it was so near the end until I saw Schmeichel coming up for the corner,” Sheringham later told The Guardian.

“Then I knew there could not be long left to play. The ball came in from Becks, it went to the far post and Dwight Yorke headed it back before a defender half-cleared it and it went to Giggsy on the edge of the box. He scuffed his right-foot shot and it came my way.

“I knew I was onside because they had a fella on the line. Before I hit it he ran out, so when the ball came to me it looked like I was offside, but I knew that I wasn’t. After I’d scored I went off celebrating, but I checked with the linesman to make sure he’d seen it right.

“A few seconds later we had another corner and Becks took it again. I went to the near post and got in front of my man, but I got up a little bit early and realised I wouldn’t be able to score, so I flicked it on to the far post into an area where I knew one of our players would be and Ole stuck out a leg and put it in the top of the net.”

Sheringham had scored just five goals for the campaign, but showed his match-winning ability when it mattered most to leave an indelible mark on the club’s treble-winning season.

The following season saw Sheringham net just six times despite adding another Premier League winners’ medal, but the enduring excellence of the forward returned when – aged 35 – he won a PFA Player of the Year and FWA Footballer of the Year double in 2000/01.

In what proved his final season at Manchester United, the veteran scored 15 goals to scoop English football’s greatest individual accolades.

The arrival of Ruud van Nistelrooy from PSV Eindhoven saw Sheringham turn down a new deal and reduced role to return to Tottenham, where he scored 26 goals across two seasons and regained the affections of the Spurs’ support left disappointed with his move to Old Trafford.

Even as his legs aged his brain remained sharp as ever, an attacking acumen that saw Sheringham later turn out for both Portsmouth and West Ham in the Premier League and reach the age of 40 as a reliable top-flight performer.

At his best he was a fantastic footballer, one who revelled in partnership and whose ingenuity often brought the best from those around him.