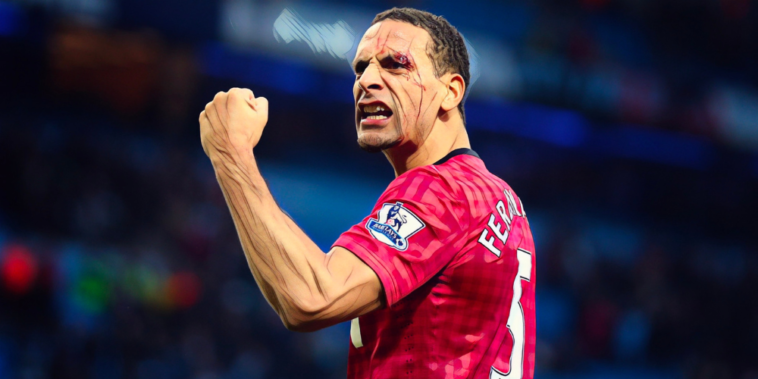 Rio Ferdinand lacked little when it came to being the complete centre-back. Both elegant and athletic, he was capable of bettering forwards with speed, strength, or sharpness of mind.

An astute reader of the game and cool and confident in possession, across a long career at the top of English football he staked a claim as the finest central defender of the Premier League era.

Inducted into the infamous Academy of Football at West Ham, Ferdinand had not always been destined to be one of the great defenders England have produced.

Undoubtedly talented, a move to the backline was initially met with reluctance from a young Ferdinand, who had aspirations of making it in the game in a more advanced role.

“They said, ‘Yeah, but I think you’ve got a better chance of being a defender.’ I think I sulked for about two or three weeks, but then I realised, ‘Actually, you know what? This is my best route if I want to be a professional footballer.'”

The move proved inspired as Ferdinand rose through the ranks in his new role, his formative years as a midfielder evident as he progressed the ball from deep with confidence.

He made his debut for the Hammers on the final day of the 1995/96 season, aged 17. The following campaign saw the teenager earn more minutes, before a breakthrough season ended with the
club’s Hammer of the Year accolade in 1998.

Ferdinand’s star was on the rise and he made his England debut just eight days after his 19th birthday, becoming the youngest defender to play for Three Lions at that time.

The centre-back was part of an exciting contingent of academy graduates in east London, featuring alongside Frank Lampard as West Ham finished fifth the following season. With the likes of Joe Cole and Michael Carrick also emerging from the ranks hopes were high, but the Hammers failed to kick-on.

Ferdinand was destined for a bigger challenge and in 2000 it arrived. Leeds United broke the British transfer record to sign the cultured centre-back, who became the world’s most expensive defender at £18m.

Leeds were ambitious and over-spending, but for two seasons before the club’s financial implosion David O’Leary’s exciting young side ruffled the feathers of England and Europe’s elite.

Ferdinand impressed as Leeds reached the Champions League semi-finals in 2000/01, scoring as Spanish champions Deportivo La Coruna were thrashed at a raucous Elland Road in the last eight.

Leeds fell short of the biggest honours however, with Ferdinand – who was named as club captain in 2001 – admitting a lack of experience cost the club major silverware.

“There was no real experience in that team of winning other than David Batty,” Ferdinand told FourFourTwo.

“No one else had the mentality. We were all young lads, 19 to 25, all living the high life. And because we were young we were getting away with it to some extent, but when it came to the crunch time and we needed to win certain games against certain teams, we didn’t have the mentality.

“I think if that team had played together for two more years and added to it, they would have challenged Manchester United, but it never materialised.”

Manchester United were the Premier League’s dominant force, having won eight of the first ten seasons of the rebranded top division. In search of a replacement for Jaap Stam, who had departed for Lazio the previous summer, the Red Devils made a move for Leeds’ club captain.

Ferdinand had shone during England’s run to the quarter-finals of the 2002 World Cup and with spiralling debts in the background at Elland Road, was allowed to leave to help combat the financial chaos.

His cross-Pennines move to Old Trafford saw Ferdinand become the world’s most expensive defender for a second time, the £30m fee eclipsing the deal that took Lillian Thuram to Juventus from Parma.

Leeds were hurt at the exit of their leader to the club’s fiercest rivals, but the move provided Ferdinand with the platform to fulfil his true ambition – winning major trophies.

At United, Ferdinand soon found himself in a win-at-all-costs culture where standards rarely slipped.

“The most nerve-wracking time was the first training session,” he recalled to FourFourTwo.

“We’re playing a piggy-in-the-middle-type game and I could hear Ole Gunnar Solskjaer saying “How much? Thirty million? What?!” I would have expected that from Keano or Butty, but not him. These are your team-mates and you want to impress them.”

Keane too had firm words for the new arrival and sent an early verbal barb in Ferdinand’s direction, having been unimpressed with a training ground pass that lacked ambition. In no uncertain terms, the defender was made aware that his levels must continue to rise.

His first season ended with a Premier League winners’ medal, but his career was placed on hold following an eight-month suspension for missing a drugs test in 2004. The ban curtailed the defender’s campaign and ruled him out of Euro 2004, as England’s ‘Golden Generation’ again bowed out in the quarter-finals.

“Eight months of my career gone, just like that,” Ferdinand recalled to FFT.

“It was easily the lowest point of my career, especially as I knew people were trying to tarnish my name by saying I was into drugs. That’s the most disappointing thing for me, that people assumed I was involved in drugs or had something to hide.”

Ferdinand returned to the side and in January 2006, Sir Alex Ferguson secured a signing that would improve the fortunes of both Ferdinand and his side. An elite defender in his own right, it is tellingly rare that Ferdinand is mentioned without Nemanja Vidic, such was the impact of their impregnable bond.

Vidic proved the perfect foil for Ferdinand, with the two forming the backbone of Ferguson’s last great side at Old Trafford. The sternness of the Serbian complimented the calm of Ferdinand, a mixture of aerial aggression and anticipation.

Their formidable partnership led to a run of three consecutive titles, the first coming in 2006/07. Each were named in a PFA Team of the Year comprising the entire Manchester United back five, alongside Edwin van der Sar, Gary Neville, and Patrice Evra.

“It was something that just worked very naturally. He was very aggressive, loved attacking the first ball and getting right into the opposing strikers, and I liked the sweeping up and covering type stuff…but our partnership brought out the best in our games and made us strive harder to be the best,” Ferdinand wrote at the time of Vidic’s retirement, as per JOE.

“My favourite partner to play alongside – YES. He became a defender that was feared, he could fight with the most physical, he crunched into tackles, he attacked the ball better than anyone I’ve ever seen.”

🗣️ "I wanted it to go down as the best partnership the club had ever had. "

The following season saw the title retained, conceding just 22 goals for the campaign. The club’s defence also provided the platform for success in Europe, with Ferdinand outstanding as Barcelona were beaten over two legs in the Champions League semi-finals.

Ferdinand captained the side as Chelsea were beaten in the final in Moscow, becoming just the third man to lift the European Cup for the club.

“As Chelsea were going to get their medals, Sir Bobby came to the bottom of the steps,” Ferdinand told FourFourTwo. “He said, ‘Rio, do you know what this means?’ Even though we’d just won the Champions League final, I hadn’t given it any thought.

“He said, ‘Rio, you’re the third person to lift this trophy for this club, and I’m one of them as well. This will change your life.’ He’s a legend for club and country. He said some other words too, and they were just beautiful. I started getting all emotional.”

Ferdinand had conquered the game both at home and abroad, with 2008/09 a record-breaking season for the Red Devils’ brilliant backline. United went 1,311 minutes without conceding a goal in the Premier League, the equivalent of 11 games and almost four months of action.

Injuries began to impact Ferdinand in the following seasons, though he remained with the club until the end of the 2013/14 campaign, walking away from Old Trafford with six Premier League titles, the Champions League and two League Cups among his honours.

For England he formed part of a generation who failed to live up to expectations, though misfortune also saw him miss out on multiple major tournaments while at the peak of his powers.

That said, his 81 appearances are bettered by just Bobby Moore and Billy Wright among centre-backs, the aristocracy of defenders to have pulled on the Three Lions.

At club level there is no disputing Ferdinand’s claim as a Premier League legend, a serial winner who spoke on his ‘addiction’ to winning trophies, a fixation which was fulfilled across more than a decade at Old Trafford.

“When you get to Manchester United and you’re winning, it’s hard to leave that, he said to FourFourTwo. “Winning is an addiction, and once I was at United, I felt I was at the top of the tree.”

Ferdinand, who brought an elite elegance to the art of defending, was right. Throughout it all, he was a pivotal part of that success.