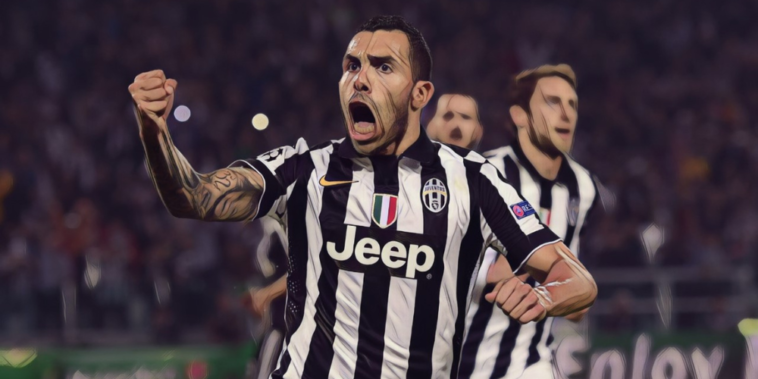 Carlos Tevez’s career was a rollercoaster in almost every sense. It was one that captivated and thrilled, with highs, lows and the right amount of unexpected twists and turns to be a wild ride worth remembering.

Tevez was a figure who both fascinated and frustrated, a polarising figure who simultaneously courted controversy while garnering the respect of supporters across a nomadic club career.

All fans often want is a footballer who gives their all. When crossing the white line, there were few who embodied that manta more than the Argentine. Tevez’s style was one of hustle and hard work, chasing loose balls with every ounce of energy. There were many slights aimed at the forward, but a lack of effort was never one.

Tevez’s tale began in Ciudadela, Buenos Aires. As a child, he sustained the distinctive scars that became familiar as his reputation grew, following an incident in which he was scalded after tipping boiling water onto himself as a child. The severity of those burns hospitalised him for almost two months.

Tevez’s talent for football soon became apparent and he was inducted into the Boca Juniors’ set-up as a child. The Buenos Aires behemoth would later have a magnetic pull on ‘El Apache’ who had three spells with the club, and handed him his senior debut aged just 16.

His talent soon saw Tevez dubbed as the heir to Diego Maradona, having soon inherited the icon’s number ten shirt at La Bombonera. Though similarities existed in a game built on an ability to shift defenders off balance, Tevez’s was an approach that lacked the elegance of his illustrious compatriot. If Maradona in full flight had the grace of a gazelle bounding between challenges, Tevez was more Tasmanian Devil – the Looney Tunes version, a whirlwind of frenzy and ferocity.

His first spell with Boca saw Tevez reach consecutive Copa Libertadores finals. The first saw Boca crowned as champions of South America, with the forward – who was named as the tournament’s best player – scoring in the second leg of the final win over Santos.

Rather than the expected exit for Europe, he changed continental challenges as Corinthians agreed a deal to bring Tevez to Brazil. The deal was the biggest transfer ever in South American football and, as occurred for much of his career, success on the pitch did not result in harmony off it. Tevez scored 31 goals in all competitions as Corinthians were crowned champions and became the first foreign footballer since 1976 to be named as the Brasileirão’s best player.

The success was short-lived and following a breakdown of his relationship with the club, Tevez departed for Europe after just one full campaign. What followed was one of the most controversial deals in Premier League history, as Tevez and compatriot Javier Mascherano pitched up in the East End of London.

Eyebrows were raised as the duo were unveiled at West Ham, having been linked with Europe’s top clubs. If under a cloud at the time of arrival, that cloud soon transformed into a storm. Their transfers – which saw West Ham break third-party ownership rules – dominated the season’s narrative, altered the relegation battle and resulted in legal proceedings.

On the pitch Tevez succeeded where Mascherano, famously kept out of the team by Hayden Mullins, failed. He overcame a difficult start of his own to become a Hammers hero, as his goals propelled the team to Premier League survival.

Sit back, relax and take three minutes out of your day to watch every Carlos Tevez goal in a West Ham United shirt 🍿 pic.twitter.com/LLSmQTfrwS

It took six months before Tevez opened his account with a fantastic free kick against Tottenham, before embarking on a purple patch that saw him score seven goals in the final ten games to lead West Ham to safety. His winner at Manchester United confirmed the club’s Premier League status for another season.

Placing the colossal rule-breaking box of worms to one side, Tevez as a footballer was everything West Ham wanted. In truth, he was a talent deserving of a grander stage, but played each game with the endearing effort of a debutant with a point to prove.

That higher platform came the following summer, as Manchester United were next to wrestle with the complicated contracts involved in signing Tevez. His arrival completed a front three to be savoured and led to the club’s greatest triumph since the turn of the millennium.

Tevez, Wayne Rooney and Cristiano Ronaldo formed a formidable forward line, one which saw United conquer both at home and in Europe. Between them the trio scored 79 goals in 2007/08, as the Red Devils added the Premier League and Champions League to a bursting cabinet.

In tandem the three players scored 71.8% of United’s goals, with their combined 57 goals in the Premier League more than 14 of the 19 remaining teams in the competition – including fifth-placed Everton.

In Europe their form was similarly devastating as the trio scored all but one of United’s goals in the knockout stages of the Champions League, a competition that ended with a final win over Chelsea.

The arrival of Dimitar Berbatov the following summer upset the harmony among them, with Tevez often the man to miss out. In search of a new challenge he departed, but few envisaged the destination.

On the opposite side of the city a blue moon was rising. Manchester City, for so long in the shadow of their cross-town neighbours, were now billionaire backed and keen to send a statement.

Tevez – unappreciated towards the end of his spell at Old Trafford – was welcomed to the Etihad with open arms. Tevez’s own open arms were depicted on that infamous billboard, as City revelled in a raid on their rivals.

Tevez thrived immediately in his new surroundings. His first season saw the Argentine score 25 goals in all competitions and was crowned with City’s Player of the Season accolade. The following season he captained the club to a seismic success, as the FA Cup brought an end to more than three decades without silverware. A new era had been ushered in at Eastlands.

In a familiar trend, however, Tevez’s time with another club proved turbulent. Unrest had surfaced following a transfer request in December 2010, before clear-the-air talks briefly halted the storm. It raged once more the following season, as his refusal to come on as a substitute against Bayern Munich led to Tevez going AWOL for much of the 2011/12 title-winning campaign.

Though he returned to contribute to that Premier League triumph, it was an incident which soured his reputation and he moved on from what had been the most prolific period of his career in 2013.

Juventus agreed a deal to sign Tevez and his two seasons with the Old Lady were perhaps his finest. Inheriting the number ten shirt vacated since the departure of club legend Alessandro del Piero, Tevez became the prominent figure in the Juventus attack.

He was tireless and tigerish, full of bustle and brilliance.

Remember this 🚀from Carlos Tevez in the @ChampionsLeague? #GoalOfTheDay 🆚 Borussia Dortmund 📅 18.03.2015 pic.twitter.com/iwVaS1LBna

He scored 50 goals across two seasons with Juventus, winning consecutive Serie A titles and reaching a Champions League final. His contribution to the second of those Scudetto’s saw Tevez named as Serie A Footballer of the Year.

The lure of home proved too strong however, and Tevez returned to Buenos Aires with unfinished business. His second spell at Boca Juniors brought an Argentine Primera División and Copa Argentina double, accolades which had proven elusive during his breakthrough at the club.

Tevez’s winning goal for @BocaJrsOficial to seal the championship 🏆 @superliga

His final ventures included a money-spinning move to China, where Shanghai Shenhua were prepared to make Tevez the highest-paid player in the game. Perhaps predictably, a footballer who rarely settled found little to relate to during a short stint in the Far East.

Fittingly, the curtain came down on his career where it started, in the famous blue and gold of Boca. While the least successful of his three-part chapter at the club, he added two further league titles and improved his haul to 94 goals in 279 appearances across those stints, separated by two decades from beginning to end.

The abiding memories of Tevez will be ones of controversy and quality, a footballer who somehow found himself alienated and appreciated in equal measure across his career. Incidents away from the pitch might have tainted Tevez, but his sacrificial and selfless style ensures fondness remains from many who watched him run rabidly for the collective cause at his best.