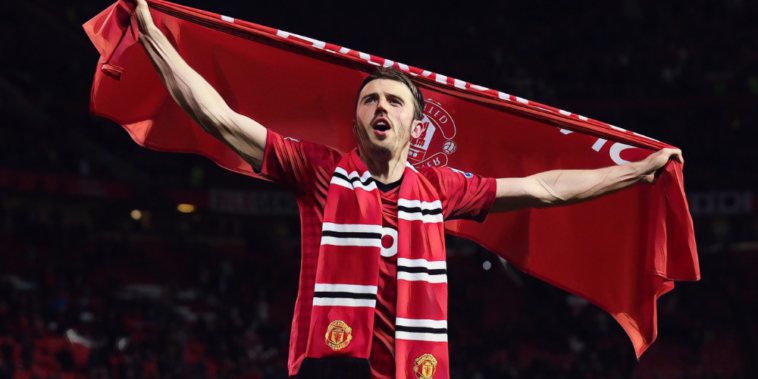 Sir Alex Ferguson possesses one of football’s greatest minds, with the manager’s mistakes few and far between during a record-breaking career at Manchester United.

His legend is one that saw him create and construct great sides over different eras, finding a way to rebuild and reinvent as he sought to maintain the Red Devils’ place at the summit of English football.

Iconic figures would come and go, but United remained England’s finest footballing side for much of his time at the helm, establishing themselves as the most successful team in the country in terms of top-flight league titles.

Perhaps no player is truly irreplaceable, but the explosive exit of Roy Keane in November 2005 left a huge hole in the Red Devils’ side.

Keane was coming towards the end of a career that had seen him become the most influential captain in Premier League history, the heartbeat of seven title-winning sides and man who ensured standards never slipped at Old Trafford.

His profile was completely different. If Keane could be chaotic and combative, then Carrick was calm and composed. He was an understated presence in the side, a juxtaposition to the unmissable ferocity of his midfield predecessor.

Carrick’s path to becoming Manchester United’s midfield conductor began in Wallsend, where he began fine-tuning his craft in the colours of the North Tyneside town’s famed Boys Club. Despite interest from boyhood side Newcastle United, he turned down the Magpies’ advances to head south.

West Ham won the race for the teenager and inducted Carrick into their prestigious set-up, where he overcame home sickness in the capital to progress through the ranks.

He followed the likes of Frank Lampard and Joe Cole in debuting for the side in the late nineties, before spending short loans at Swindon and Birmingham as he sought to develop physically.

Carrick became a regular over the following three seasons, including remaining with West Ham following their relegation from the Premier League in 2002/03. Unable to secure promotion at the first attempt, however, he moved on to Tottenham in a £3.5m deal.

Carrick struggled for minutes under Jaques Santini after his initial arrival in North London, but the appointment of Martin Jol transformed his fortunes as he grew in importance to the side.

The hallmarks of his game flourished at Spurs, controlling games from the base of the midfield and demonstrating the tactical intelligence and passing range that would lead to interest from Old Trafford.

After two seasons with Spurs he completed a move to Manchester United in a deal worth up to £18.6m, where he inherited both Keane’s number 16 shirt and his place in the Red Devils’ engine room.

Carrick’s arrival coincided with a period in which United’s status as the Premier League’s dominant force had been questioned, with the previous three league titles having headed to Arsenal and Chelsea.

Carrick’s first season included two goals in a famous 7-1 thrashing of Roma in the Champions League, whilst it ended with a Premier League winners’ medal draped around his neck.

He added further league titles as the Red Devils won three consecutive championships, the second of which came alongside Champions League glory as Chelsea were beaten on penalties in Moscow.

United were back at the pinnacle of the game both at home and abroad, but for all of Carrick’s valuable contributions he still failed to command automatic respect and divided opinion.

He was, in truth, a footballer ahead of his time and one who became increasingly appreciated as his career advanced.

“I like that there’s nothing flashy about him. He never broke a sweat, either. He was like a Rolls Royce, just cruising around the football pitch.”

The midfielder was continually – and regrettably – overlooked at international level. Even given the abundance of elite talent England possessed at that time, it is baffling that Carrick was not afforded more than the 34 caps he amassed over a 15-year career with the Three Lions.

Coach after coach persisted with the unsuccessful Frank Lampard and Steven Gerrard axis, failing to find balance. Accommodating Lampard’s goals and Gerrard’s match-winning drive without compromising either required the perfect foil, an answer that perhaps lay at Carrick’s feet.

It is difficult to envisage how a midfield trio containing Carrick’s composure and the box-to-box brilliance of Lampard and Gerrard could not have provided England with a greater chance of tournament success.

England’s loss, however, was a gain for his side at club level.

Destructive defensive midfielders had often been lauded, but here was the constructive Carrick bringing a touch of continental class to the base of the midfield.

Whilst never afraid to make a challenge and positionally intelligent as the side’s anchor, it was his passing range from his position as the pivot that began to shine through.

Had he been born with a Spanish passport, it is probable he would have earned even greater acclaim.

“When you play with Michael Carrick you think there is authority, control, peace.

“Scholes and Carrick together was peaceful. It was like going into a bar and hearing a piano playing. It’s relaxing.

“Listening to some good rock is good and you like that too but sometimes it’s nice to listen to a piano. Carrick’s a piano.”

Carrick’s passing was extraordinary over short and long range, with his zenith coming as Manchester United won a record-extending 20th league title during the 2012/13 season.

In what proved to be Sir Alex Ferguson’s final campaign in charge, his midfield maestro led the Red Devils towards another championship success.

Carrick’s contribution can never be quantified with tangible statistics, but those who watched on during his best seasons at Old Trafford were in little doubt over his significance to the side.

He ended the season as Manchester United’s Players’ Player of the Season, an incredible achievement given the goalscoring exploits of Robin van Persie following his arrival from Arsenal.

Carrick conducted the side with a masterful range of passing as the Stretford End serenaded the Geordie, their complimentary chant comparing Carrick to Paul Scholes regularly echoing around Old Trafford.

He was named in the PFA Team of the Year and shortlisted for the organisation’s Player of the Year accolade, a footballer who had long operated in background now taking centre stage in the spotlight.

Amongst his finest moments of the campaign was a sublime assist for Javier Hernandez in an FA Cup clash with Chelsea, an exquisite pass that few elsewhere in the ground will have even seen before its pinpoint execution.

He remained with the club following the departure of Ferguson, a leader and reference point for a succession of managers who tried and failed to replicate the Scot’s success.

His final seasons saw him add further to an extensive silverware cabinet, however, becoming one of just two Englishmen, alongside former teammate Wayne Rooney, to complete a full set of major honours.

Five Premier League titles, three League Cups and winners’ medals in the Champions League, Europa League, FA Cup, Community Shield and Club World Cup ensured Carrick hung up his boots as one of the most decorated domestic footballers of all time.

It's Carrick, you know… pic.twitter.com/3jOR65Dzxo

Carrick’s career somewhat followed the narrative of Scholes, his former midfield accomplice at Manchester United. Whilst fine footballers at the peak of his powers, their technical talents were more universally appreciated in the closing stages of their careers.

The former had followed a long lineage of Manchester United midfielders that included Bryan Robson, Paul Ince and Keane, each all-action and authoritative personalities on the pitch.

Carrick was neither, but then he didn’t need to be. He was brilliant in his own magnificent manner, the cool conductor of Sir Alex Ferguson’s last great side.