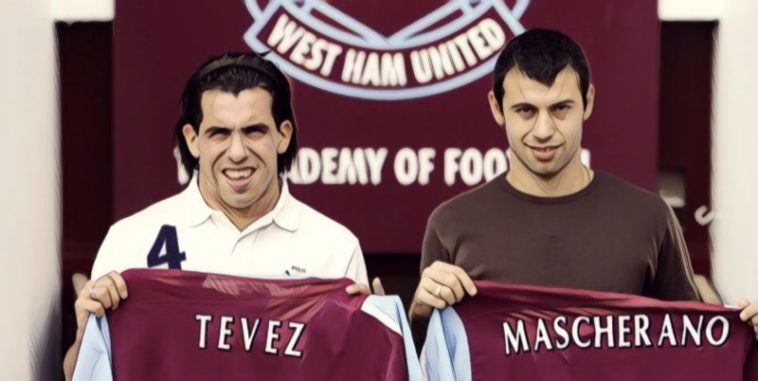 By the time Esteban Cambiasso arrived to apply a thumping finish to Hernan Crespo’s back-heel, Serbia and Montenegro’s defence had been destroyed by a free flowing 26-pass move that lit up the 2006 World Cup.

The Argentina squad that traveled to Germany oozed quality and was many people’s favourite to win the entire tournament. Amongst them was a couple of 22-year-old stars who were about to make a huge impact on the Premier League.

After the World Cup talk of where Carlos Tevez and Javier Mascherano would end up began to swirl around the gossip columns.

Tevez was a silky forward with near superhuman work rate, capable of intricate skill and sublime finishing. Mascherano was a combative holding midfielder, adept at shielding the back four and allowing his more attacking midfield teammates to bomb forward.

A host of top European clubs were jostling for position to acquire the talented pair from Brazilian outfit Corinthians. As it happened, a transfer would materialize but it wasn’t Barcelona or Real Madrid who bagged the youngsters it was West Ham United.

On 31st August 2006, the Hammers pulled off what appeared to be the mother of all transfer coups. Somehow, they had done a deal to sign both players ahead of some of the biggest clubs in world football.

Still reeling from losing an FA Cup final to Liverpool, Upton Park was not exactly where you’d expect to find two top-class youngsters rocking up to ply their trade. Even then manager Alan Pardew was bemused, scoffing at the time: “Don’t be ridiculous…It’s never going to happen.”

The West Ham playing staff were equally dumbfounded. Many of them learned of the deal via updates from equally stunned Sky Sports News correspondents. If the people connected to the Hammers were confounded yet pleasantly surprised by what appeared to be a transfer coup for the ages, the wider football community raised a collective eyebrow. Questions were about to be asked.

What was particularly strange about the deal was that no money appeared to have exchanged hands. It would later transpire that Tevez had a release clause in his Corinthians contract of between £69 and £83 million, which if triggered would have made him comfortably the most expensive player in the world at that time. How then, did the Hammers get him for next to nothing?

Suspicions well and truly pricked, the deal came under immediate scrutiny. An almighty hornet’s nest was disturbed in the coming weeks, exposing the Premier League to a murky subplot that sprawled out across world football, from São Paulo to the banks of the Moskva River, with toxic fallout reaching South Yorkshire.

A trail of bare-faced lies and distortions had resulted in a fact-finding phone call to the Premier League from then West Ham Commercial Director Scott Duxbury. He had wanted to know about the legality of offshore companies owning the transfer rights of players.

According to Alex Duff and Tariq Panja’s book Football’s Secret Trade: How the Player Transfer Market Was Infiltrated; Duxbury was strongly advised against a move for players who came under third party ownership as it was in direct breach of Premier League rules and would very likely not be sanctioned.

The day after this phone call, Duxbury was hastily sending over documents for the registration of Tevez and Mascherano as West Ham United players.

Just a few days on, with suspicion still rife, Premier League Chief Executive Richard Scudamore was quizzing the Hammers’ managing director Paul Aldridge over the exact nature of the deal. Aldridge shrugged off any suspicion and offered only his reassurances regarding paperwork and protocol.

However, the questions never really went away. A three man investigative group was duly deployed and by March 2007 the East Londoners were in deep trouble.

Under the investigator’s microscope the nature of the player’s ownership soon became clear. A quartet of third-party investment funds; Media Sports Investments, Just Sports Incorporated, Global Soccer Agencies and the aptly names Mystere Services Ltd, were found to be in full control of the transfer rights of the players.

Media Sport Investment had bought into Corinthians back in 2004 and was fronted by British-Iranian former car-salesman Kia Joorabchian. Two exiled Russian billionaires; Arkady Patarkatsishvili and Boris Berezovsky, who had fallen foul of Vladimir Putin’s assault on the oligarchs were reportedly behind the venture. They employed the  charismatic Mr Joorabchian as their representative, as they looked to emulate Roman Abramovich’s successful dabble into the lucrative world of English football.

Crucially, the panel found that they were not merely background investors looking to cash in on their nest eggs. In fact it was they, rather than West Ham, who held full sway over the future transfers of both players. This directly flouted rules U6 and U18 and the Premier League’s head honchos were duly incensed.

It also transpired that important paperwork had been concealed in order to get around the league’s rulings on third party ownership. In short, the deals were illegal and would never have been approved under the league’s existing framework.

With no place to hide the club’s directors pleaded guilty as charged. A points deduction was on the cards but instead, the authorities opted for a record £5.5 million fine in April 2007. Alas, this is not where the controversy ends. There was the not-so-small issue of Tevez’s stand-out ability in an otherwise dire West Ham side.

On the field the club’s 2006/07 form had been abysmal. A team of talented youngsters that had achieve a respectable ninth-place finish the season before and only lost to Liverpool on penalties in the cup final had completely capitulated.

Tevez would take 1,142 minutes to notch his first goal while Mascherano would leave for Liverpool in January having failed to settle. With just eight games to go, The Hammers were marooned in the drop zone, ten points from safety.

And yet, Tevez would find his form in the nick of time to help pull off the most controversial great escape in Premier League history. West Ham’s form mirrored that of their stocky forward as they picked up 21 points from a possible 27 available, culminating in a final day victory over Manchester United at Old Trafford.

Tevez scored the only goal that day as his side clambered above their relegation rivals Sheffield United, who went down to the Championship by virtue of goal difference after a cruel 1-2 home defeat to Wigan Athletic.

The Argentine’s form was critical in the West Ham’s dodging of the bullet. A tally of seven goals in his final nine matches dragged his side up to 15th place. Immediately though the Blades cried foul play. They appealed to the everybody and anybody, that the Premier League’s decision not to dock the Hammers points for their murky transfer dealings had played a helping hand in their demise. Even Sean Bean got involved as the tempers rose exponentially.

The signing of Tevez, they argued with justification, should never have been sanctioned under Premier League rules and therefore West Ham had an unfair advantage. It was the beginning of a new and protracted row that was not settled until September 2008, when an FA tribunal ruled in Sheffield United’s favour leading to West Ham owing a hefty compensation package in excess of £20 million.

According to the Daily Mail the tribunal’s judgment read: “…we think it more likely than not on the evidence we heard that even over the final two games of the season West Ham would have achieved at least three points less overall without Mr Tevez…”

The money was only a temporary balm for Sheffield United as they went on to suffer a near decade of financial turmoil. However, the settlement did at least mark the end the most embarrassing transfer saga in Premier League history, although bad blood between the Blades and Hammers continues to this day.

Years before FIFA followed suit, the powers that be in the Premier League were so scarred by the events of August 2006 that they changed their laws on third party ownership, leading to an outright ban on the practice ahead of the 2008/09 campaign.

While commonplace in South America, the Premier League had never been entirely comfortable with the notion of anyone other than a football club having the final say over a player’s destiny. The saga left them exposed and embarrassed by two transfers which were wholly illegal under their strict guidelines and yet so easily circumnavigated by simple bold deception.

For the first time, globalization and relentless capitalism had caught up with and indeed, caught out the Premier League’s executives and rule makers. Tevez and Mascherano would go on to be world class in their own right, but the shadow of their initial transfers would linger on and become a cautionary tale of controversy and a memorable black eye for the division’s top brass.