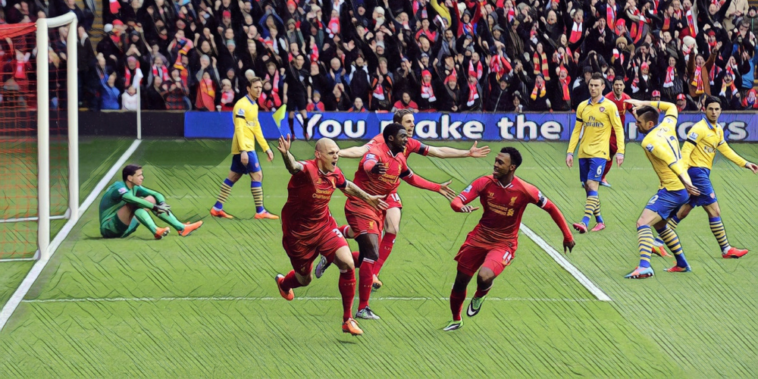 As Liverpool prepare to host Arsenal at Anfield this weekend, it’s an opportune time to reflect on a memorable previous victory for the hosts against the Gunners, with Brendan Rodgers’ side hitting five in the fixture back in March 2014.

The visitors had gone into the match full of confidence at the top of the table, but saw their title bid derailed by a brutal first-half mauling on Merseyside, as the Reds hit four in the opening twenty minutes, before adding a fifth just after the break.

A late penalty from current boss Mikel Arteta proved a mere consolation for Arsene Wenger’s men, with the result sparking an 11-game winning run for the home side, who narrowly missed out on a first Premier League title in the closing weeks of the campaign.

Ahead of Saturday’s meeting, here’s a look back at Liverpool’s starting XI on that memorable day back in 2014.

Liverpool have had a significant upgrade in the goalkeeping department in recent years following the arrival of Brazilian stopper Alisson, with Simon Mignolet failing to truly convince during his time at the club after joining from Sunderland in 2013.

The often erratic Belgian almost endured a moment to forget in the first-half of the victory over Arsenal, after punching a clearance into his own defender.

Although beaten by Arteta’s spot-kick at Anfield, Mignolet enjoyed an impressive penalty saving record with the Reds and saved eight during his time with the club.

The 33-year-old departed in 2019 and currently plies his trade for Club Brugge.

Off-the-field incidents have seen the full-back suffer a real career nosedive in recent years, with the 2013/14 campaign having proved a real high point in an otherwise underwhelming Liverpool career for Flanagan, who made 23 Premier League appearances that season.

The academy graduate made just five more league appearances aross the following seasons, spending time on loan at Bolton Wanderers and Burnley, before a move to Rangers in 2019.

After a solitary season at Belgian side Charleroi, the 28-year-old Englishman joined Danish club HB Koge in the summer.

It proved a relatively easy afternoon for the Reds defence as their attacking stars ran riot, with Kolo Toure essentially watching on as his former club were put to the sword, the Ivorian having been part of the Gunners’ famed ‘Invincible’ side, before joining Manchester City in 2009.

Another title followed at the Etihad before the centre-back made the switch to Anfield, proving a popular –  albeit error-prone – figure over the next three seasons, before reuniting with Rodgers at Celtic in 2016.

The now-retired 40-year-old is currently part of the Northern Irishman’s coaching set-up at Leicester City.

Martin Skrtel netted two of his seven Premier League goals that season in the victory, poking home from a Steven Gerrard free-kick inside the opening minute, before adding a second ten minutes later with an expertly taken header from another Gerrard set-piece.

A lethal presence in the opposition box, the Slovakian was somewhat shaky in his own area, emphasised by a record four own goals scored during the 2013/14 season, with Liverpool’s defensive fragility contributing to their failure to win the title.

THAT header. THAT celebration! 😱😱

The centre-back spent eight years at Liverpool between 2008 and 2016, before enjoying spells at Fenerbahce and Istanbul Basaksehir, helping the latter side to a maiden Turkish title in 2019/20. The 36-year-old currently plies his trade for Spartak Trnava.

A forgotten man in this side, Aly Cissokho spent just a solitary season on loan at the club from Valencia, making 15 Premier League appearances before joining Aston Villa the following season on a permanent deal.

Something of a European journeyman, with spells in France, Spain, Portugal and Turkey among others, the 34-year-old left-back currently plays for Thai side Lamphun Warrior.

For so long the driving force at Liverpool in a stellar career, Steven Gerrard was coming towards the end in 2014, but made a fine transition into something of a midfield quarterback under Rodgers, in contrast to his previous all-action style.

A fine campaign for the Englishman – in which he netted 13 Premier League goals – would end in heartbreak as his slip against Chelsea ultimately contributed to the club missing out on the title, with his time on Merseyside ending a year later with a notable void in his silverware collection.

Arguably the best midfielder of his generation and one of the greatest the Reds have ever produced, he departed in 2015 for LA Galaxy after 710 appearances for his boyhood club. He has recently made a return to English football as manager of Aston Villa, following a successful stint at Rangers.

The eventual successor to Gerrard as captain, Jordan Henderson endured a tough start to life at Liverpool after joining from Sunderland in 2011, with suggestions Rodgers had been keen to use him in a swap deal for Fulham’s Clint Dempsey just a year later.

Henderson turned down an exit in favour of fighting for his place, with the 2013/14 campaign a real breakthrough season as the Englishman earned rave reviews for his energetic and relentless midfield displays.

The 31-year-old remains vital under Jurgen Klopp and only recently signed a new four-year deal, having lifted both the Champions League and Premier League in recent years as skipper. He is also the only player on this list to have played in the 5-1 win over Arsenal at Anfield four years later, entering the fray as a second-half substitute.

The Brazilian magician produced a masterful display on the day, epitomised by his delightful threaded pass for Daniel Sturridge’s 20th-minute strike, one of seven assists he registered that season, on top of his five league goals.

The former Inter Milan midfielder emerged as arguably the club’s best player over the next few years and courted attention from a number of top sides across Europe, eventually joining Barcelona in a mammoth £142m deal in January 2018.

While Klopp’s men have gone from strength to strength in his absence, Coutinho has endured a dismal time of it since at the Nou Camp, while the 29-year-old’s signing has also played its part in the current financial crisis facing the La Liga side.

The 2013/14 campaign was a standout season for Raheem Sterling as he netted nine Premier League goals in 33 appearances, with his dazzling display against the Gunners once of the finest of his Liverpool career.

The young forward tapped home to make it three following Luis Suarez’s pull back, before adding his second and the hosts’ fifth just after half-time, turning in on the rebound after his initial effort had been saved by Wojciech Szczęsny.

The England international made a controversial £49m switch to Manchester City the following year and has since netted 116 goals in a trophy-laden stint at the Etihad, although the 26-year-old appears set for pastures new after falling out of favour.

Much of the ‘success’ of that season was built on the form of Luis Suarez, the controversial Uruguayan dragging the club into the title race after a stunning individual campaign, bagging 31 goals and 12 assists in the Premier League.

That included an assist for Sterling in the 5-1 drubbing, while he was unfortunate not to get himself on the scoresheet, leathering a volleyed effort onto the post from just outside the box, before almost catching out the Arsenal stopper with a curling second-half free-kick.

The striker – who had almost joined the Gunners at the start of the season – signed for Barcelona in a £75m deal at the end of the campaign and won four league titles and the Champions League with the Spanish side.

He currently plies his trade for Atletico Madrid and helped Diego Simeone’s side to the La Liga title last season, after being unceremoniously pushed out of Catalonia.

Suarez’s strike partner during that season was Daniel Sturridge, the two men thriving during their 18-month stint together at Anfield, following the Englishman’s move from Chelsea in January 2013.

His composed finish in the win over Arsenal – following an earlier miss – was one of 21 goals he would score that season, after netting ten in just 14 appearances at the back end of the previous campaign.

Struggling with injury issues and in the absence of Suarez, he failed to hit those heights again and largely remained on the periphery under Jurgen Klopp until his exit in 2019.

After a brief spell at Trabzonspor, the 32-year-old is now on the books of A-League side Perth Glory.

The ‘Welsh Xavi’ – as he was affectionately named by Rodgers – joined the club in 2012 after following his former Swansea boss to Merseyside, though was largely restricted to a bit-part role in the next few years, as illustrated by his late entry as a substitute in this clash.

A starring display for his country at Euro 2016 was followed by a move to Stoke City that summer, with the 31-year-old still at the club as the Potters pursue promotion from the Championship.

Plucked from Wycombe Wanderers – where he made his debut as a 15-year-old – Jordon Ibe looked set to be the next big thing after moving to Anfield in 2011, although never really made the grade at Liverpool before joining Bournemouth in a £15m deal in 2016.

In truth, he failed to repay that fee and quickly fell out of favour, eventually joining Derby County on a free transfer in 2020, although would only make one appearance for the club.

The 25-year-old is currently without a club and has spoken openly on his struggles with mental health.

The final substitution – with Allen having already replaced Sturridge and Ibe coming on for Gerrard – was Spaniard Iago Aspas, the striker entering the fray in the 86th minute in place of Suarez.

He scored just once in all competitions during a disappointing solitary season at the club, spending the following year on loan at Sevilla.

Aspas returned to former club Celta Vigo in 2015 and has since developed into a prolific presence, the 34-year-old having netting 108 La Liga goals across the last seven seasons.