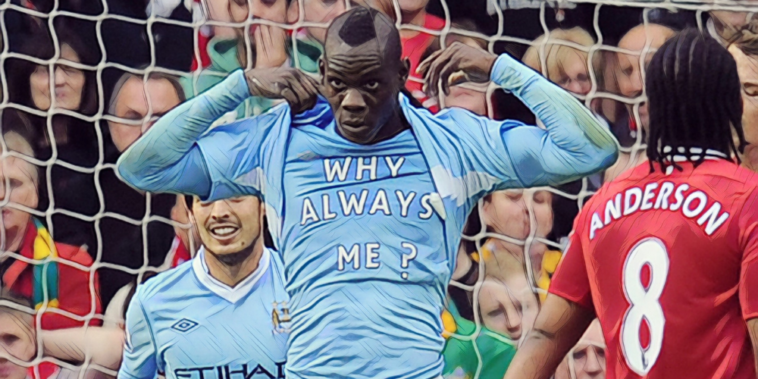 All eyes will be on the Etihad this weekend, as Manchester City meet Manchester United in one of the Premier League’s most anticipated fixtures

For two decades under Sir Alex Ferguson, Manchester United were the dominant force – not just within the city of Manchester, but of English Football in general, and few would have predicted City to ever threaten the Red Devils’ superiority.

However, a transformative takeover and the managerial genius of Pep Guardiola has turned Manchester City into the division’s top dogs and the league leaders are in search of another Premier League title this season.

The Red Devils are seeking to end a decline that has lasted for almost a decade and will travel across Manchester in search of derby bragging rights this weekend.

Ahead of the latest meeting, we look at five of the greatest clashes between these two old foes.

While Denis Law’s back-heeled finish didn’t technically relegate Manchester United, it certainly felt that way at the time. We often moan about players not celebrating against their former side, though, in this case, it made total sense.

After more than a decade of service and 237 goals for United, it was heartbreaking for the striker to be the one who (sort of) sealed their fate, as the Red Devils dropped into the second tier of English football.

Law was substituted immediately after the goal and never played for City again.

As a football fan there is nothing better than having bragging rights over your neighbours, or at the very least having something you can hold over them. City fans went into his derby in high spirits, United’s, not so much. Why? Well, United had been knocked out of the Champions League in the days running up the game, having blown a 2-0 lead against Turkish side Galatasaray.

The City fans were only too happy to remind their rivals of that fact and when Niall Quinn stuck a brace of headers past Peter Schmeichel they were in dreamland. But those were the days of chronic ‘City-itis’.

“2-0 and you f##ked it up!” the home fans had gleefully sung in the first half. Have a guess what happened in the second…

Keano won us the derby at the death in 1993!#MUFC #GoalOfTheDay pic.twitter.com/HW9dksYJAo

We debated long and hard about including this one. It wasn’t the best of games in fairness, and it’s definitely not easy to call what made it so memorable ‘good’ or ‘the best’, but Roy Keane’s hatchet job on Alf-Inge Haaland certainly is one of the most unforgettable moments in the Premier League.

Keane, showing a remarkable ability to hold a grudge, slammed into his opponent’s knee in retaliation for a comment made by Haaland four years previous. The Norwegian – playing for Leeds at the time – claimed that the Irishman was faking an injury during a clash at Elland Road.

“He was an absolute p**** to play against. Niggling, sneaky.

“I did want to nail him and let him know what was happening. I wanted to hurt him and stand over him and go: ‘Take that, you c***.'' – Roy Keane. pic.twitter.com/KJzb293Vby

Apparently the game finished 1-1, but the lesson we all learned was not to get in Keano’s bad books.

A much more modern derby this time and probably the most exciting. This was the new, rich, Manchester City and they had splashed the cash the previous summer, adding a host of talented players, including former United forward, Carlos Tevez.

It was a ding-dong battle at Old Trafford, with United taking the lead three times through Wayne Rooney’s opener and a Darren Fletcher brace, only to be pegged back on each occasion thanks to strikes from Gareth Barry and a double from Craig Bellamy.

Perhaps a draw would have been a fair result, but with the game into its sixth of four added minutes, there was one final twist.

The ball dropped to the evergreen Ryan Giggs at the edge of the box, who – with perfect weight and accuracy – slipped it through City’s defence to find former England international Michael Owen, who rolled back the years with an inch-perfect finish past Shay Given into the corner.

Disaster for City. Delirium for United.

United fans, scroll down now because this was one you’ll almost certainly want to forget. City fans, try not to watch this one too many times.

Mario Balotelli and his infamous ‘Why always me?’ me celebration got the ball rolling, with Edin Dzeko, Sergio Aguero and David Silva getting further goals for City his their fiercest rivals for six.

United, meanwhile, were reduced to 10 men after Johnny Evans saw red on an unforgettable day for the Citizens, one which Sir Alex Ferguson called his ‘worst day ever’.

Losing 6-1 to your bitter rivals at home will do that to you, Fergie.