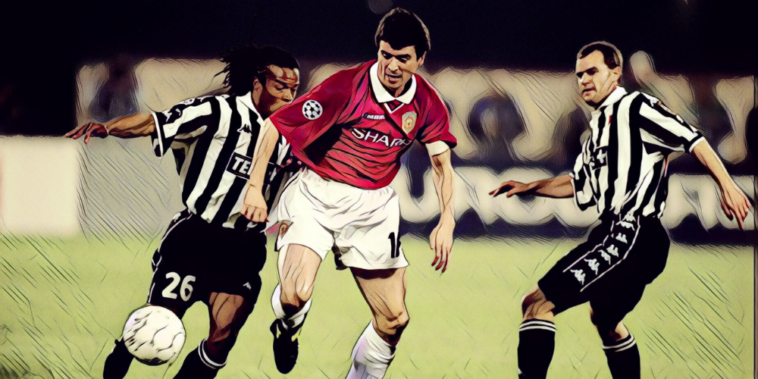 Manchester United completed the most historic season English football has ever witnessed during the late nineties, their 1998/99 treble side amongst the greatest seen on these shores.

Winners of the Premier League, FA Cup and Champions League in unprecedented fashion, the memories of an unforgettable season are regularly retold through montages of iconic imagery and misty-eyed memoirs from supporters.

It was a season littered with defining moments, from Ryan Giggs’ wondrous semi-final winner in the FA Cup, the final day comeback that sealed the Premier League title, and that night in Barcelona that saw victory snatched from the jaws of defeat to crown the Red Devils champions of Europe.

United’s coronation as winners of the Champions League against Bayern Munich was the final piece of the treble jigsaw, a dramatic evening few will ever forget but one which may never have unfolded had it not been for a special performance from Roy Keane in Turin.

Keane proved one of the most influential footballers of a generation during a silverware-laden spell with Manchester United, the Irishman arriving from Nottingham Forest in a club-record deal and leaving a lasting legacy at Old Trafford.

Rarely has a footballer played with such intensity and unrelenting will-to-win, a man who set nothing short of the highest expectations for both himself and those who joined him as teammates in a red shirt.

Keane proved the perfect player to rule what proved a dynasty for the Red Devils in the early Premier League era, the on-field voice of Sir Alex Ferguson’s dominant side and a leader who led through both intimidation and example.

He arrived as British football’s most exciting and expensive talent and won a domestic double during his first season, adding a second two years later and a third league title in 1997 before inheriting the captain’s armband from the outgoing Eric Cantona.

Ferguson’s side, blessed with an abundance of home-grown talent from the academy ranks, had dominated domestically but success in Europe had proven difficult to secure with a Champions League semi-final defeat to Borussia Dortmund – in which Keane missed the second leg through suspension – as close as they had come to club football’s biggest prize.

In search of a first European crown in more than three decades, Ferguson bolstered his side with the signings of Jaap Stam and Dwight Yorke ahead of the 1998/98 campaign, one that proved a rollercoaster with an unforgettable climax.

United’s continental campaign had begun by being drawn in a Group of Death alongside both Barcelona and Bayern Munich, progressing as runners-up to the Germans after going unbeaten in their six group stage fixtures – Keane’s goal sealing a 1-1 draw in Bavaria in their final fixture.

Inter Milan awaited in the last eight but a talented side proved no match for Ferguson’s treble-chasing outfit, Yorke’s brace at Old Trafford sealing a 2-0 advantage ahead of the return leg, a fixture that saw Paul Scholes’ late goal secure the Red Devils’ passage to the semi-finals.

The age-old saying is that ‘to be the best, you have to beat the best’ and a last four meeting with Juventus turned that phrase into a reality, the Bianconeri finalists in each of the past three Champions League campaigns.

A star-studded side containing the likes of Zinedine Zidane and Filippo Inzaghi arrived at Old Trafford for the first meeting and had looked set to take a lead back to Italy for the return, after Antonio Conte netted a priceless away goal for the visitors.

Juventus were the better side for much of the contest, but Ryan Giggs’ stoppage-time leveller handed Ferguson’s side a lifeline ahead of the trip to Turin.

United travelled to northern Italy facing a sizeable task at an atmospheric Stadio Delle Alpi, their challenge soon appearing almost impossible after a nightmare start to the second leg.

Inzaghi put the hosts ahead after just six minutes to increase the raucous sound around the home stadium, before a deflected effort just five minutes later made it 2-0 and left the English visitors with a mountain to climb.

What followed was a Herculean performance from their inspirational club captain, who poured blood, sweat and tears into the cause, driving his side forward and raising the levels of those around him still shell-shocked from Inzaghi’s quick-fire salvo.

Ferguson’s side had made a welcome habit of staging charismatic fight-backs, but this would take a new level of mental resilience against one of Europe’s most formidable outfits in their own backyard.

It was fittingly the combative Cork-native who set the comeback into motion, ghosting in between a host of black and white shirts to meet David Beckham’s corner and power home a precious goal.

The timing of the jump and technique of the header were perfection, guiding his finish beautifully into the unmarked far corner to halve the deficit.

Keane echoed the stoney-faced look of his manager as he shrugged off congratulations from a succession of teammates, the midfielder well in the knowledge that his side had some way to go.

It was, however, game on.

Keane’s celebration was, in essence, emblematic of his performance on that night in Turin, failing to be distracted by the dramatic events that unfolded and a cauldron-esque Delle Alpi, possessing only a single-mindedness in driving his side to club football’s biggest stage.

He was simply everywhere throughout the 79 minutes that followed Inzaghi’s second goal, covering every blades of grass and shutting passing lanes, stamping his authority on the contest and overpowering arguably the world’s finest footballer in Zidane.

Just minutes after his goal had provided hope for United, there was a moment that changed the narrative of the tie, Keane’s late lunge on Zidane seeing the midfielder cautioned – a yellow card that would rule him out of the final should his side progress.

At the same venue that saw Paul Gascoigne shed tears after receiving a yellow card in the 1990 World Cup semi-final, another player of huge name had seen his own dreams wrecked by a costly challenge.

Whilst Gascoigne was visibly impacted by his England booking, Keane proved made of sterner stuff.

This was a man who played not for the name on the back of the shirt, but for the badge emblazoned on the front, his performance level only rising as he fought to ensure his teammates did not suffer the same heartbreak he would in missing club football’s biggest occasion.

Keane threw himself into challenges and gave every last inch of self-sacrifice for the cause, dictating and dominating his midfield battle with Edgar Davids and driving the Red Devils back from the abyss.

United were level and ahead on away goals before the break, Yorke heading home Andy Cole’s cross to hand the advantage to the Premier League side.

Juventus raised the levels in the second half as they desperately sought to regain the momentum, the Italian’s dream of a fourth final in succession ebbing away with each passing minute.

Keane went toe-to-toe with some of the continent’s finest midfield players and came out firmly on top, a metronomic figure in the Red Devils’ engine room and authoritative leader in a desperate time of need.

Cole’s late goal sealed a 3-2 win for United and booked their place in the Champions League final, the club’s Italian job complete as a first final in 31 years waited against Bayern Munich at the Camp Nou.

Lesser characters would have folded in the events of that night, but Keane only stood taller.

United’s inspirational figurehead dragged his side kicking and screaming through their Turin test, the catalyst for a stirring comeback on an evening in which his legend was forever assured.

“I did not think I could have a higher opinion of any footballer than I already had of the Irishman but he rose even further in my estimation at the Stadio Delle Alpi. The minute he was booked and out of the final, he seemed to redouble his efforts to get the team there.

“It was the most emphatic display of selflessness I have seen on a football field. Pounding over every blade of grass, competing as if he would rather die of exhaustion than lose, he inspired all around him. I felt it was an honour to be associated with such a player.”

Keane himself has distanced himself from the adulation he has subsequently received since that defining evening more than two decades ago, his incredible individual display simply the standard he expected from both himself and his teammates.

Keane’s performance set the stage for one of the most dramatic Champions League finals of all time, as Ole Gunnar Solskjaer scored the second of two stoppage-time goals to crown United champions of Europe for a second time.

The midfielder watched on as his teammates lifted the most illustrious trophy in club football, though their opportunity was provided to them by a captain who did more than most for the cause.

“It was probably one of the best performances I have ever seen.

“The way he continued playing, maybe even better, was something you don’t see every day. You know he was a man on a mission that day. When you see some of the clips now, you can tell he was not going to let anything stop us getting to the final.”

In a season of unprecedented peaks, Keane’s selfless showing in Turin lives long in the memory. It might just be the most influential Manchester United performance in a fixture of such magnitude.