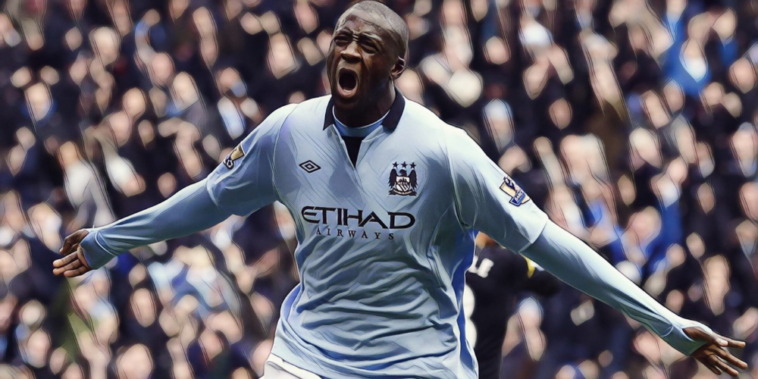 Asked to construct the perfect box-to-box midfielder and your hypothetical project would likely resemble something close to Yaya Toure.

Toure’s best football saw him form a monstrous presence in the engine rooms of Barcelona and Manchester City, a footballer who combined raw athleticism with finesse and technique, and who drove his side onwards through rampaging drive.

The midfielder won club football’s biggest prizes and enjoyed success on the international stage too, forming part a Golden Generation of Ivorian talent in the national side.

His route to the pinnacle of the sport began at ASEC Mimosas, a club in the Ivory Coast that has become renowned as somewhat of a talent factory. Toure and his elder brother, Kolo, are two of its most prominent graduates, alongside past Premier League names including Salomon Kalou, Gervinho, Emmanuel Eboue and Didier Zokora.

ASEC Mimosas has links with Belgian side Beveren, who have often taken the most promising players from the African outfit and ran the rule over emerging names.

Toure spent two seasons with Beveren and made 70 appearances in all competitions, before being granted a trial at Arsenal in 2003.

Kolo had earned a contract with the Premier League side a year earlier and Yaya was hoping to follow suit, but work permit issues prevented a move materialising.

In search of success his career then took a nomadic route, a quick-stop tour round some of Europe’s most far-flung destinations. Two seasons with Metalurh Donetsk in Ukraine was followed with a single season spell at Olympiacos, before another short spell – this time with Monaco – attracted interest from Spain.

Toure’s performances in the principality saw Barcelona make a move for the midfielder, securing his signing in a £6.7m deal. He signed under Frank Rijkaard, but the Dutchman’s reign came to an end after Toure’s debut season as the winds of change swept across Catalonia.

In came Pep Guardiola and the arrival of the club’s former midfielder proved the catalyst for an unforgettable era at the Camp Nou.

Guardiola’s first season saw Barcelona win a historic treble of Champions League, La Liga and Copa del Rey, with Toure an important part of the club’s success despite the emergence of Sergio Busquets as a competitor for the midfield anchor role.

His versatility was such that featured at centre-back during the Champions League’s latter stages, filling in amid a lack of options for the semi-final second leg with Chelsea and the final victory over Manchester United in Rome.

It proved his final season with the club, as a perhaps undervalued member of Barcelona’s winning-machine swapped the blue skies of Barcelona for the more murky Mancunian weather.

Manchester City has began to close the gap on England’s elite after a billionaire-backed takeover two years earlier and the signing of Toure was a strong statement of intent.

Toure was arguably the first instance of a world-class talent choosing City as their destination of choice and he would prove a monumental signing in their pursuit of success.

He ended his first season as the match-winner as City won a first major trophy in 35 years, beating Stoke in the FA Cup final with Toure scoring the game’s only goal at Wembley.

He had scored the winner as Manchester United were beaten 1-0 in the semi-finals, a goal which symbolised the shifting balance of power in the rivalry as the blue moon began to rise.

The following season saw City win the Premier League in the most dramatic of fashion, a stoppage-time strike from Sergio Aguero snatching the championship from Manchester United in the final seconds of the season.

Toure had been at the forefront of the club’s challenge, an all-action powerhouse at the centre of the side. Granted greater freedom than at Barcelona, he was a devastating ball-carrier as he marauded forward in possession, often leaving a trail of desperate defensive challenges in his wake.

His ability to deliver when it mattered most was again prominent, scoring twice in a win at Newcastle on the Premier League’s penultimate weekend to leave the destination of the title in City’s hands.

Toure’s finest season came in 2013/14 as Manuel Pellegrini found the perfect balance in midfield. The security provided by Fernandinho’s arrival from Shakhtar Donestsk unleashed a new turbo-charged version of Toure, one who proved almost unstoppable during one of the Premier League’s great individual campaigns.

He became just the second Premier League midfielder – after Frank Lampard – to score 20 league goals in a season, and finished the campaign with 24 in all competitions.

From fantastic free-kicks to bending finishes from distance and late arrivals into the penalty box, Toure was a formidable proposition and one Premier League defences struggled to contain.

Yaya Toure was something else 😍pic.twitter.com/bNeD7GaglR

The image of Toure regaining possession before charging into enemy territory became a familiar one, a marauding menace whose lung-busting drives forward cut teams apart.

He scored again in another major final as City won the League Cup, netting one of the great goals scored at the new Wembley with a whipped equaliser from distance against Sunderland.

Toure’s performances had kept Pellegrini’s side in a tight title race with a free-scoring Liverpool side, the Reds seemingly riding a wave of momentum towards a drought-breaking Premier League crown.

He scored a stunning solo goal as Aston Villa were beaten at the Etihad during the run-in, a goal that encapsulated the brilliant best of Toure’s barnstorming runs.

City were cruising to a 3-0 win when Toure received possession inside his own half, with the home side on the counter-attack after a cleared corner. Sensing his opportunity, the midfielder slammed his foot on the accelerator, powering past the retreating Villa shirts before firing home in emphatic fashion.

Few Premier League footballers have ever looked quite as unstoppable when approaching top gear. Thierry Henry, perhaps, is one example, but Toure’s mix of size and speed was exhilarating viewing as he shifted from a languid manner to almost breakneck speed in an instant.

But for an equally sensational season from Luis Suarez and Toure would have had a Footballer of the Year accolade to go alongside his team honours.

The following year brought international success as Toure captained the Ivory Coast to the Africa Cup of Nations, scoring the opener in the semi-final win over DR Congo before The Elephants secured a shootout victory over Ghana in the final.

It was a first triumph in the competition since 1992 and a fitting victory for the nation’s talented side, a team had finished as runners-up three years earlier.

“When you win with your club, it’s quite amazing.

“With your country, it’s unbelievable.”

– Yaya Toure after winning the 2015 AFCON

He remained an important part of the City side over the following seasons, though his fortunes deteriorated somewhat after a reunion with Guardiola in Manchester.

His reputation had earlier been damaged following a bizarre incident in which his agent, Dmitry Selyuk, claimed Toure wanted out after the club’s failure to commemorate the star’s birthday with a cake.

It was a strange situation and one the midfielder regrets, blaming Selyuk for an incident which he believes ‘damaged’ his status.

Toure added a third Premier League title during the 2017/18 season, before short spells with Olympiacos and Qingdao F.C. before retirement.

Whilst statues of David Silva and Vincent Kompany have been erected outside of the Etihad, with a Sergio Aguero likeness set to follow, there have been few calls for Toure to be similarly commemorated.

He was, however, perhaps the biggest influence on the early period City’s rise as a dominant force, a man for the big occasion and one who has inked his place permanently into the fabric of the club.

Roving and rampaging through the midfield in destructive fashion, he was incomparable at his best and one of the Premier League’s greatest engine room influences.