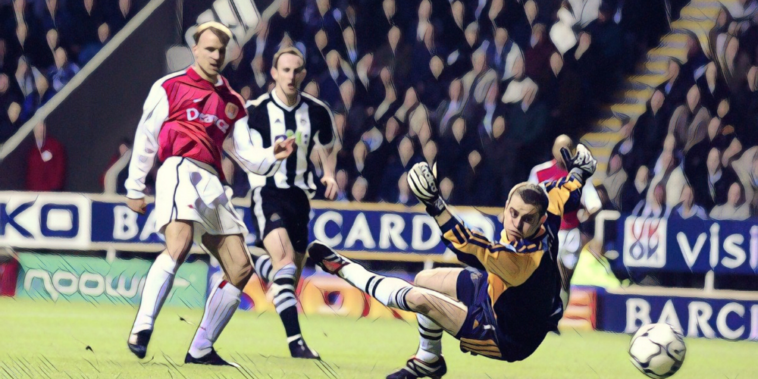 Two decades ago, Dennis Bergkamp scored a goal that remains one of the greatest in Premier League history.

That sentence alone will be enough to provoke vivid memories for Premier League fans, the Dutchman’s incredible pirouette turn and finish for Arsenal at Newcastle etched into the division’s folklore.

Bergkamp’s goal was both compelling and captivating, whilst in the 20 years since its perfect execution there have been few goals of similar style or standard.

In celebration of Bergkamp’s glorious goal at St James’ Park, we’ve decided to look back at five of the most unique goals scored in the Premier League.

We’ll start with the inspiration for this feature and the balletic brilliance of Bergkamp, a footballer who left a lasting legacy on these shores but who will perhaps forever be defined by that moment at St James’ Park.

Arsenal travelled to Newcastle in need of a win to keep their title aspirations alive, the Magpies having emerged themselves as unlikely title challengers and headed into the clash on a four-game winning run.

It was the Gunners who earned three points, however, with Bergkamp’s 11th-minute opener a moment in which time seemed to stand still as the Dutch genius produced an unforgettable piece of perfection.

Dennis Bergkamp's iconic turn and finish against Newcastle gets better with every angle 📐 pic.twitter.com/8XUUrArk4G

Robert Pires’ pass fell behind the run of Bergkamp, but in an instinctive moment the forward readjusted his body to take a touch on his left foot.

As Dutchman and ball spun in differing directions, Bergkamp rolled the way of his momentum and collected his touch on the opposite side of Nikos Dabizas before cooly keeping his calm to roll a finish past Shay Given.

It was a goal of absurd technique and improvisation from Bergkamp and one which remains one of the most iconic the Premier League has seen.

Mention the name Paulo Di Canio and images of the forward’s flying scissor-kick will instantly come to mind, a goal of outrageous timing, technique and execution.

Di Canio became a huge fans’ favourite across four seasons with West Ham, his extroverted passion and penchant for special goals earning him adoration from the terraces.

Perhaps no goal better symbolised the maverick brilliance of Di Canio, an audacious scissor-kick goal that illuminated the Boleyn Ground.

Di Canio vs Wimbledon is the greatest Premier League goal ever

Harry Redknapp said Di Canio ‘can do things with the ball that people can only dream of’ when gambling on the signing of the controversial Italian from Sheffield Wednesday, an almost prophetic quote given the incredible goals the forward scored for the east Londoners.

David Beckham’s breakout goal from the half-way line for Manchester United is perhaps the Premier League’s most memorable long-range effort, but there’s something special about this Maynor Figueroa goal for Wigan.

Whilst Beckham’s brilliant technique came to define the midfielder, Figueroa was certainly less of a regular goalscorer having netted just four league goals for Wigan in 179 appearances.

That the left-back decided to take on a quick free-kick from the half-way line was both outrageous and ambitious, a moment of quick-thinking and technique that earned the Honduras international his place in Wigan folklore.

Arsene Wenger described Olivier Giroud’s scorpion kick as the greatest goal he had seen at the Emirates Stadium, after the French forward produced an incredible moment to secure Arsenal a 2-0 win over Crystal Palace in 2017.

The backheeled volley was later named as winner of the FIFA Puskas Award, a fitting recognition for a moment of improvisation from Giroud that helped the Gunners move up to third in the Premier League.

Giroud modestly put the goal down to ‘luck’, but it’s an effort few will forget.

Just six goalkeepers have ever scored a Premier League goal, but none have done so with such drama as Alisson’s effort for Liverpool in 2021.

Needing a goal to keep alive their hopes of securing a top four finish, the Brazilian goalkeeper wandered forward in the fifth minute of stoppage-time to power home a header and earn Liverpool a 2-1 win at West Brom.

Alisson’s soaring header from Trent Alexander-Arnold’s corner was the first competitive goal scored by a Liverpool goalkeeper in the club’s 129-year history, whilst he became the first ever Premier League goalkeeper to score both a header and a winning goal.