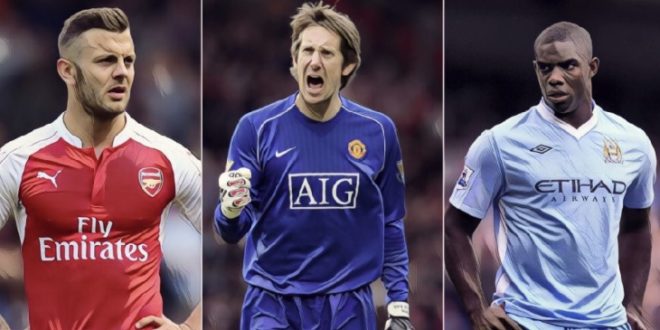 With ever increasing sports science available, Premier League careers are now longer than ever before, with several players continuing to compete at the highest level far past their perceived peak.

The widely accepted career trajectory of top flight stars includes being eased into the first-team fold before establishing themselves in their early twenties, enjoying a peak in performance in the coming years before entering the twilight of their career into their early thirties.

There are, however, exceptions to every rule and we’ve decided to look back at some of the record-breaking ‘wonder kids’ and ‘golden oldies’ for the Premier League’s top six.

Here is every top six clubs oldest and youngest ever Premier League player:

Wilshere became the youngest player in Arsenal history when making his debut as a substitute against Blackburn Rovers in September 2008, the young midfielder having made a big impression in the club’s youth system.

The teenager’s mature performances saw him quickly establish himself in the first-team at the north London side, earning increased involvement in cup competitions over the next two seasons before a breakthrough campaign in 2010/11 saw Wilshere named as the PFA Young Player of the Year and make his senior international debut for England.

Injuries, however, hindered his progress and a player once tipped to become a mainstay for club and country was allowed to depart the Gunners for West Ham on a free transfer in 2018.

Wilshere made 197 appearances in all competitions and won two FA Cups with Arsenal during a decade in the first-team, though despite several bright moments his career has failed to see him fulfil his huge initial promise.

The German goalkeeper arrived at Arsenal as a long term replacement for club legend David Seamen, where he impressed during a five-year stint and formed part of the club’s famed ‘Invincibles’ side of the 2003/04 campaign.

Notoriously hot-headed, Lehmann later returned for a brief second spell at the Emirates in 2011, where he set a new record as the club’s oldest ever Premier League player.

The veteran made just one league appearance during that second stint, though his inclusion aged 41 years and 150 days in a 3-1 win at Blackpool saw him set a new landmark, in addition to making his 200th appearance in all competitions for the Gunners.

Chelsea through and through, Morris became the youngest Premier League player in the club’s history when making his debut as a 17-year-old against Middlesbrough in the mid-nineties.

The midfielder had come through the academy ranks at the Blues alongside future captain John Terry and was handed his opportunity in 1996, later being named as the west London side’s Young Player of the Season.

Morris – current assistant manager to Frank Lampard at Stamford Bridge – made 124 league appearances for Chelsea but failed to build on his early promise, the technically-gifted midfielder forced out under Claudio Ranieri and later enjoying spells at the likes of Leeds, Millwall and Bristol City.

Another veteran of the goalkeeping world, Schwarzer joined Chelsea as a back-up option during the latter years of a lengthy career in English football that included impressive spells at both Middlesbrough and Fulham.

The former Australian international made just four league appearances during a two-year spell at Stamford Bridge, the last of which came at the grand old footballing age of 41 years and 216 days against Cardiff.

Schwarzer’s cameo performances for Chelsea at the end of the 2013/14 season also saw him reach 150 Premier League clean sheets, with only Petr Cech and David James having ever registered more.

Jack Robinson’s history-making moment came on the final day of the 2009/10 campaign, introduced as a late substitute by Rafael Benitez to become the youngest player in Liverpool’s history.

Robinson’s record was subsequently broken by Jerome Sinclair two years later, though his cameo at the KC Stadium means he remains the youngest player ever to have represented the club in a Premier League fixture.

Despite high hopes at the time of his first-team bow, the left-back’s career failed to truly take off and he made just a further two league appearances for the Reds, enjoying mixed fortunes during loan spells at the likes of Wolves and Blackpool.

The former England U-21 international has since forged a solid career at Championship level, before earning a return to the top flight with Sheffield United in January 2020.

The true definition of a ‘golden oldie’, McAllister’s free transfer move to Liverpool proved one of the club’s most inspired pieces of business in the Premier League era.

Many questioned the wisdom in the Bosman signing of the veteran Scotland midfielder shortly after the turn of the millennium, but McAllister would silence those critics by enjoying a memorable Indian summer on Merseyside.

The experienced star helped Gerard Houllier’s young side to a treble of cup successes during the 2000/01 campaign, proving an indispensable figure to the side and a mentor to young talents such as Steven Gerrard and Jamie Carragher.

Amongst the highlights of his two-year spell included a stoppage-time Merseyside derby winner and a Man of the Match performance in the UEFA Cup final, McAllister becoming a huge fans’ favourite at Anfield and the oldest player to represent the club in the Premier League era.

Roy Keane may have ridiculed Micah Richard’s recent comments that he ‘burst onto the scene’ as a youngster, but it is difficult to remember many other defenders making such a notable impact in their teenage years.

The powerful right-back was tipped for a huge future after making his Premier League debut for Manchester City at just 17-years-old, later becoming the youngest defender in history to represent England the following year.

Richards forged a decent career during a decade at the Etihad and won two Premier League titles, though he failed to reach the heights once expected and retired in 2019 after unsuccessful stints at Fiorentina and Aston Villa, aged just 31.

John Burridge holds the distinction of being the oldest player in Premier League history, appearing for Manchester City at the record-breaking of 43 years and 163 days.

Burridge’s career began way back in 1969 at Workington and lasted almost three full decades, hanging up after a spell at Blyth Spartans in 1997.

In-between, the goalkeeper had spells at the likes of Aston Villa, Crystal Palace, Newcastle and Manchester City, making his final Premier League appearance in 1995.

Jose Mourinho may often be criticised for his inability to bring on young talents, but the Portuguese can lay claim to fielding Manchester United’s youngest ever Premier League player in Angel Gomes.

Gomes was introduced as a late substitute on the final day of the 2016/17 season, becoming the first player born in the 2000’s to make their Premier League bow.

Despite his obvious potential, however, Gomes has failed to build on that initial showing and has made just a further four league appearances over the past three seasons, though he remains highly-rated at Old Trafford.

Rating every member of Man United’s fabled class of 92

One of the goalkeeping greats of the Premier League era, Van der Sar proved one of Sir Alex Ferguson’s shrewdest acquisitions after the capture of the experienced goalkeeper from Fulham in 2005.

The Netherlands international spent six seasons at Old Trafford and won a wealth of major honours, including four league titles and the 2008 Champions League.

Van der Sar’s record-breaking appearance came on the final day of the 2010/11 campaign, a season which saw the goalkeeper named in the PFA Team of the Year and become the oldest player ever to feature in a Champions League final.

The Irish full-back made his first appearance for Tottenham during the second season of the Premier League, appearing against Ipswich Town less than a month after his 17th birthday.

It proved to be another two seasons before the youngster became a regular, however, Carr establishing himself as a hugely reliable presence in over a decade at the north London side.

The right-back made 272 appearances in all competitions for Spurs and won the League Cup in 1999, later enjoying successful spells with Newcastle and Birmingham before his retirement in 2013.

The evergreen US international enjoyed a stellar career in English football, Friedel seemingly continuing to improve with age and playing at the highest level into his forties.

Friedel enjoyed spells with Liverpool, Blackburn and Aston Villa before finishing his career with Tottenham, making 50 league appearances for the club and becoming their oldest ever Premier League player.