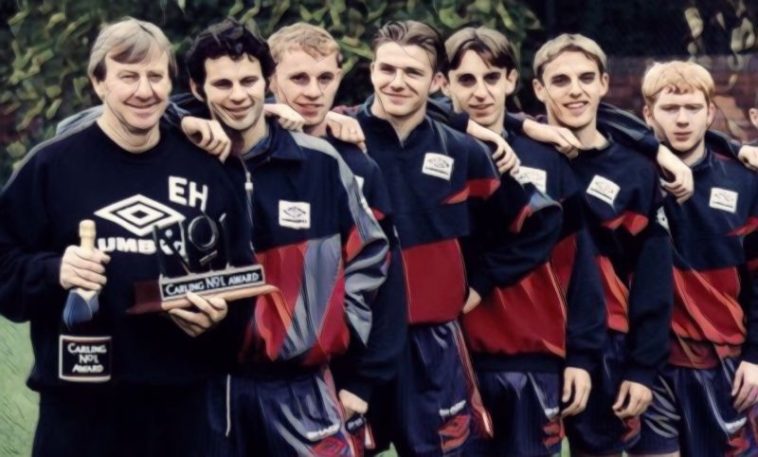 They’re the homegrown heroes who provided the nucleus for an era of dominance for Manchester United, the class of ’92 have long been held up as the benchmark for nurturing local talent into the first-team for any successful football club.

Ryan Giggs, Paul Scholes, David Beckham, Nicky Butt and the Neville brothers all made a huge impression during distinguished careers at Old Trafford, flourishing under the guidance of legendary manager Sir Alex Ferguson and helping to bring a wealth of silverware success back to Old Trafford.

We’ve decided to look back at each of the academy graduates, and rank the members of the fabled class of ’92:

The first of Fergie’s Fledglings to make an impression in the first-team, Giggs was handed his debut as a 17-year-old and never looked back as he became the most decorated player in the history of English football.

Beginning his career as a flying left-winger with blistering pace, Giggs would evolve to play a key role in several eras and title-winning teams, often operating centrally in his latter years as his physical powers diminished.

His list of accolades include 13 league titles, four FA Cups and two Champions League titles, whilst he also became the first player in history to win the PFA Young Player of the Year in two consecutive seasons before winning the senior award in 2009.

Named in the PFA Team of the Century in 2007, no player has ever registered more Premier League assists than the Welshman, whilst he is also United’s record appearance maker after featuring 963 times, scoring 168 goals.

Perhaps the first footballer to truly transcend from athlete to celebrity, Beckham’s status as a global icon should not diminish from his footballing achievements.

Becks would announce himself to English football with a stunning half-way line goal against Wimbledon, whilst his breakthrough season in the United first-team would see Sir Alex Ferguson’s side complete a domestic double.

Operating from the right-hand side of midfield, Beckham’s pinpoint delivery and set-piece expertise made him a potent weapon in several title-winning sides, the former England captaining winning six Premier League titles and finishing as the division’s leading assist provider on three occasions.

He would play a key role in the club’s famed treble-winning season of 1999, his performances in that campaign seeing him finish as runner-up in both the Ballon d’Or and World Player of the Year awards.

Five of the best goals from the halfway line

The Gorton-born midfielder would spend ten seasons as a first-team regular at Old Trafford, with his combative approach and tendency to deliver in important moments in his early years making him a fan’s favourite.

Butt would win six league titles and four FA Cups during his spell at the club, whilst he would play the entirety of the 1999 Champions League final victory in the absence of suspended captain Roy Keane.

Whilst Keane and Paul Scholes would become the first-choice midfield options, Butt was nonetheless an important contributor to several success before his departure for Newcastle in 2004.

Now back at the club as Head of the Academy, Butt will be hoping to bring through the next batch of emerging local talent.

The five most successful clubs in English football history

One of club football’s great one-club men, few players have enjoyed such popularity amongst the Old Trafford faithful as former midfielder Paul Scholes.

Regarded as one of the greatest midfielders of his generation, Scholes would begin as an attacking star, arriving late into the box and becoming a regular name on the scoresheet.

His later years would see him drop deeper and dictate the tempo of games, his touch, vision and unrivalled passing range allowing him to flourish in the midfield of 11 title-winning sides.

Only Giggs and Sir Bobby Charlton have ever made more appearances in the club’s red shirt than Scholes, whilst his 115 goals also put him in their top 10 goalscorers of all-time.

He would miss the 1999 Champions League final through suspension, before memorably scoring a stunning semi-final winner on route to success in the same tournament nine years later.

Such as his influence he was persuaded back out of retirement by Sir Alex Ferguson in 2012, eventually retiring a year later after winning 19 major honours.

A local lad and boyhood United fan, Neville came through the youth ranks alongside brother Phil and established himself as fixture at right-back.

A one-club man, he would win 20 trophies during his length Manchester United career including eight league titles, eventually being named as club captain and maintaining the role for five seasons.

Reliably consistent and tenacious, Neville would form a superb partnership with best mate Beckham down the right-flank under Sir Alex Ferguson and become recognised as arguably the finest right-back in the division.

The younger brother of Gary, Phil’s reliability and versatility would make him a valuable squad member following his first-team emergence under Sir Alex Ferguson.

Utilised in a variety of roles including left-back, right-back and in midfield, Neville would win six league titles, three FA Cups and the Champions League as part of that famed treble-winning season.

In ten seasons as a first-team regular he would make 386 appearances, scoring eight times. With competition for places restricting his opportunities he would opt to leave the club 2005, joining Everton in a £3m deal where he could go on to become club captain.