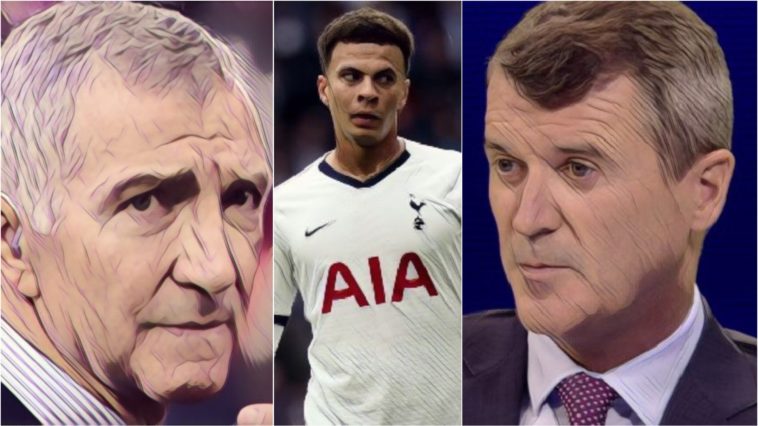 Tottenham Hotspur’s defeat at Anfield appeared to be pinned all on one player – but it said a lot about the state of punditry and analysis in the modern game.

To tune in to Sky Sports on Sunday was almost like witnessing the last rites being read on a football career, as if the death knell was about to ring out at any second. That’s how it appeared anyway when each of the broadcaster’s pundits took their turns tearing apart the performance of 23-year-old Dele Alli against Liverpool.

Gary Neville got the ball rolling: “That was a poor version of Dele Alli out there … it’s not good enough and he’s got to get his mentality back.”

Souness chimed in: “I think he’s the classic case of someone who has got himself in his armchair. They give him a four or five-year contract they gave him last year (it was actually a six-year deal) and look what it’s done to him.”

Of course, these were the moments for which Roy Keane was hired, and he didn’t pass up the opportunity to put the boot in: “He’s lost that hunger, and when you lose that it’s hard to get it back. He’s had a few injuries, I’ll give him that, but from what I hear, off the field stuff, basically he thought he was a player, he thought he had achieved something.

“Today, he was non-existent,” the Irishman added, before needlessly claiming that the Spurs player acts as if he’s a “male model”.

This is the consequence of Sky’s fast food, empty calories, diet pill approach to post-match analysis, which they doubled down on when they demoted Alex Scott to Goals On Sunday and brought in Keane. It’s favouring insults and personal barbs – narrowing a game down to things like “mentality” and pashun – over analysing what, how or why something happened on the pitch.

That’s how you get broadcasts like Sunday, when a single player is focused on and essentially scapegoated for a bad result. Alli wasn’t the only one who came in for criticism, as Serge Aurier and Danny Rose were also shat on, but the midfielder took the brunt of it. The match felt more like an excuse for three men to have a go at a young player, instead of informing us all about what actually went on out on the pitch.

It can make for semi-interesting television, but we’re offered no real insight. How could someone possibly see into a player’s head and know they’ve “lost that hunger”? Or what their mental state of mind is? It’s all conjecture, but advances a spurious narrative nonetheless.

When Keane said Alli was “non-existent”, what did he mean by that? Judging by the statistics, no one on the Spurs side was involved more than him. In a team that only made 290 passes compared to Liverpool’s 627, he made 31. That’s not an impressive number at all for a team with top-six aspirations, but he still completed more than any of his teammates. On top of that, only one other Spurs player had more than his 50 touches of the ball, while he also covered more distance (12.2km) than any other player on the field.

Given the resources of the company for which he’s working, Keane would have had all that information and more available to him. Those stats don’t mean Alli should automatically be considered their man of the match, but it paints a different picture from the one that was presented to us last week. Not that we should have expected any different, considering we’re only a couple of months removed from his unnecessarily personal comments about Jon Walters.

“I thought he’d be getting 20 goals a season,” Souness added at one point. “He’s a shadow of himself, he’s still a boy, he’s still learning the game. He needs to refocus and get back to the things he was doing.”

This points to something else that gets a lot of attention when it comes to Alli: goals. Because he scored a bundle of them from the get-go in his career, there is now a huge focus on that side of his game. If he’s not scoring, then he mustn’t be playing well, or so the hypothesis goes.

This leaves out a few important details. For one, he’s been injured for much of the past year – he missed 22 games in all competitions last season. Secondly, he hasn’t been playing in the same position. At his goalscoring peak he was essentially a shadow striker playing off Harry Kane, getting himself into great positions to shoot (although he scored plenty of low value long-range efforts too) with his intelligent runs.

After selling Mousa Dembele and losing other midfielders through injury last season, Poch was forced to make changes to his midfield. Alli was shifted to a deeper role, where he’s been operating ever since. On Sunday his average position was on the halfway line and he is a lot less likely to find chances to score or create for others from there.

On top of that, the game plan – aside from trying to sit on their slender lead for most of the match – appeared to be to play long balls over the top. When they were instigating an attack, the ball was more or less going over Alli’s head every time. Not only is he not part of buildup play, it seems unwise not to have him further up the pitch to utilise those aforementioned runs. It’s hardly a surprise then that there has been a drop off in production.

One of the complaints about Alli’s game is his risky ball play, that willingness to gamble with possession by taking a man on and try and beat them with a flick or trick. This yet again brings confusion as to why he has been placed in a deeper role, however. When he’s in the final third, the reward when it pays off could be a goal scoring opportunity or a chance to create something, and the risk is somewhat mitigated by the fact that the ball winner still has two thirds of the pitch to go. In a deeper role they would be much closer to goal.

The Super Sunday pundits were so close to making a meaningful observation. They mentioned his injury record, touched on the fact that this is a worse team than in previous years under Pochettino, and his youth (his stats are still better than both Steven Gerrard and Frank Lampard at the same age, by the by). But they skipped over all of that context and went straight for the kill instead.

The sad thing is this not only unfairly puts the focus on one person when the performance was a collective problem, but it also cheats us, the viewers, out of learning something new from what was a very interesting encounter. There were so many avenues to go down and have an engaging discussion about it, but that never materialised.

Sky have done a brilliant job in recent years of elevating the level of analysis through personalities like Jamie Carragher, Jose Mourinho and, ironically enough, Gary Neville, whose evaluations are becoming increasingly tedious. It feels like this season has seen that progress halted, if it hasn’t taken several steps backwards.

Read: A tactical analysis of Liverpool’s 2-1 win over Spurs