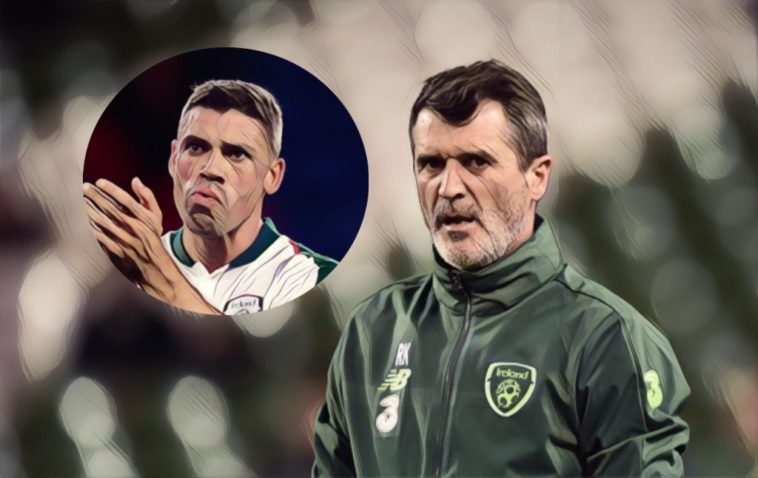 This just in: Roy Keane and Jonathan Walters still do not like each other.

If anyone was still wondering whether or not the former Manchester United captain was worried about how people thought of him, then his comments last night should dispel any notion once and for all.

As is his way, Keane spared no prisoners when he appeared at a Cadbury’s Off The Ball Roadshow in Dublin’s Bord Gáis Theatre, having a cut at a number of players he coached during his time as Ireland’s assistant manager.

During his stint as Martin O’Neill’s number two, the Corkman had a run-in with Bournemouth player Harry Arter related to the amount of time the midfielder spent on the treatment table.

Stephen Ward then recorded a Whatsapp voice message describing what happened, which was later widely shared online, with Walters saying it was a mild version of what actually happened.

“Harry Arter went to Cardiff on loan, they got relegated,” Keane said on Wednesday night. “Wardy can’t get in the Stoke team at the moment and they’re down at the bottom of the league.”

It was Keane’s comments about Walters that were most cutting though. The former Stoke City and Burnley forward had a turbulent 2018, enduring the tragic passing of his brother, his wife’s miscarriage and his daughter being diagnosed with scoliosis in the space of a few days, which he spoke about on the Sky Sports programme Goals on Sunday.

Keane and Walters in happier times.

“He talks a good game,” Keane said, before continuing with seemingly little sympathy for a player he managed at Ipswich Town: “Imagine if he’d won a trophy. He goes on the TV about how he was harshly treated by me. He’s crying on the TV about his family situation.

“Maybe he should lie low for a while. Have a look at his medals? That wouldn’t take long.”

Walters did, however, score important goals for Ireland, including two in the Eur0 2016 playoff against Bosnia & Herzegovina, but Keane was quick to knock that back when he was reminded of that.

“How many years ago is that?” he asked. “How long is he going to live off that? A certain player scored against Holland and he still is,” a clear reference to Jason McAteer.

Walters had a not-so-subtle message for Keane on Twitter this morning.

Keane’s quotes hit a nerve with Irish football supporters, who consider Walters one of the most popular international players to have played for Ireland in recent years.

Roy Keane tonight sneered at Jon Walters “being on tv crying about his family situation.”

A guy who walked out on a World Cup because the training pitch was dry telling a man who struggled with his brothers death to get over it https://t.co/asvBkec6uL

Roy Keane literally wrote the book on whinging and discussed his own family often. Height of hypocrisy when he gives out to others for doing similar. pic.twitter.com/VrXDycFGRg

Roy Keane was a great footballer. What he said about Jon Walters last night is further proof that he's far from a great man.

What a complete and utter c*nt. pic.twitter.com/prgVWkEQFd

The feud between Keane and Walters goes back to their days together at Ipswich, when the player wanted a move away from the club but the manager was unwilling to let him go. Walters eventually got his transfer to Stoke.

Read: Why are clubs choosing youth over experience for managerial roles?