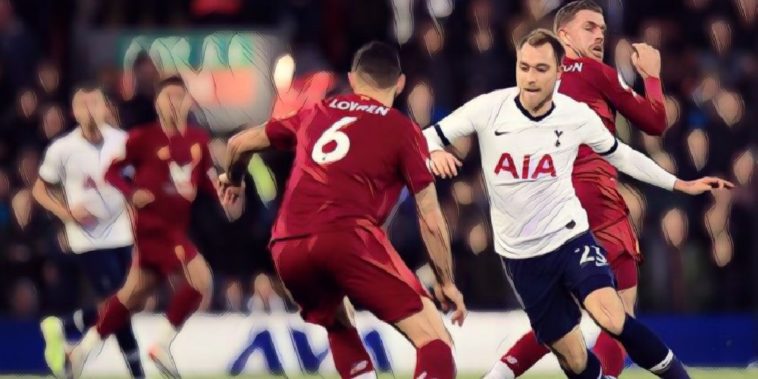 Times have certainly changed since that fateful night in June, as Tottenham’s busy summer has given way to a turbulent start to the season while Liverpool have dominated proceedings in the Premier League thus far. The European Champions reinstated their superiority as they secured a 2-1 win at Anfield.

While Mauricio Pochettino has come under significant pressure in recent weeks, both for his handling of off-pitch proceedings and perhaps more pertinently, his team selection and tactics.

Saddled with an unbalanced squad in which he has had to balance new faces, unhappy players, and declining talents, the Argentine has struggled to settle on a coherent tactical system to maximise his squad’s potential. Yet against Liverpool, Pochettino initially set his Spurs side up to defend deep and compactly while posing a significant counter-attacking threat.

Pochettino employed a positionally fluid 4-3-3, with Dele Alli joining Harry Winks and Moussa Sissoko in central midfield, with Harry Kane being flanked by Heung Min-Son and Christian Eriksen. While nominally playing in similar positions, Eriksen and Son occupied vastly different roles in the game. The Danish playmaker routinely dropped off to collect the ball and progress attacks from deep, while Son played high and wide on the left, exploiting the space behind the attack-minded Trent Alexander-Arnold to serve as Tottenham’s out ball during counterattacks. Defensively, Spurs fell back into a 4-5-1, with Son and Eriksen tasked with pushing out to cover the Liverpool fullbacks.

For the first 25 minutes, the plan worked to perfection. A goal within just 47 seconds created by a driving run from Sissoko and finished by Kane following a deflected Son shot provided the visitors with the ideal circumstances to execute their game plan: sit back, soak pressure, and hit Liverpool on the break.

Yet as the game progressed, Liverpool’s relentless tenacity and aggression began to wear down the Tottenham defence, pushing them further back towards their own goal. Suddenly, the Tottenham block that had so effectively stifled Liverpool in the opening period was facing a barrage of Liverpool attacks. They became far too narrow and deep to close down the onslaught of crosses from Robertson and Alexander-Arnold, though an inspired performance from Gazzaniga was enough for Tottenham to maintain their lead into the second half, though a Liverpool goal was seemingly inevitable.

A golden opportunity in which Son rounded Alisson and hit the crossbar was squandered before a teasing ball from Fabinho was calmly finished by Jordan Henderson at the back post to finally bring the hosts level. 23 minutes later, the hosts moved into the lead thanks to a Mohamed Salah penalty.

The second half was perhaps the prime example of the glaring weaknesses that have hindered Tottenham this season. The equaliser was the product of poor defending. Rose tucked in despite ample cover in the centre and failed to get out to close down the space he vacated. The penalty meanwhile was the pinnacle of an abysmal second-half display from Serge Aurier, who was both suspect defensively and seemingly incapable offensively. Fullbacks are crucial cogs in Spurs’ system, and it’s little surprise that with a lack of quality options, the North London outfit have lost some of the attacking verve and defensive solidity that they have relied on in recent reasons.

Yet Pochettino cannot escape criticism either. For all his ingenuity with his initial tactical system, he seemed reluctant to alter his team’s approach at halftime despite Liverpool’s domination towards the end of the first half, an accusation that has often been pointed at the Argentine.

The last ten minutes showed that Tottenham were indeed capable of controlling possession and creating chances, leaving one to wonder why they were resigned to cede possession for so much of the game.

Jurgen Klopp will be pleased with his team’s resolve and a six-point lead over Manchester City, with little to worry about in his team’s performance.

The game will be of much more concern to Pochettino however, who once again will have to reckon with the limitations of his team in order to salvage some semblance of stability to get his side’s season back on track, Spurs now sliding to 11th in the league.