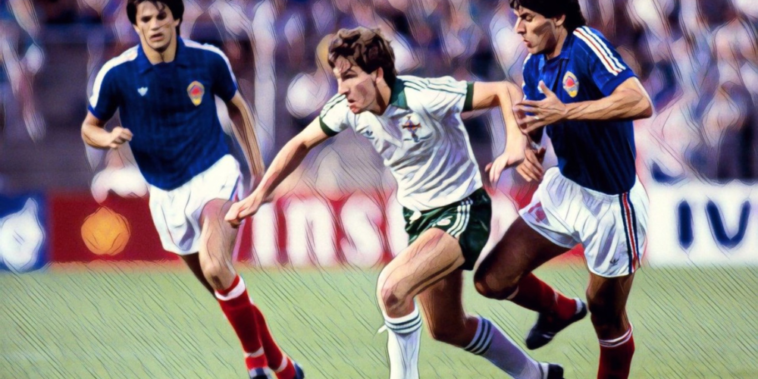 World Cups often provide the platform for stars to emerge and past editions of the tournament have seen some fantastic teenage talents make their mark.

Germany’s Youssoufa Moukoko will be the youngest player at the Qatar World Cup this winter, having only celebrated his 18th birthday on November 20.

Moukoko is a comparative veteran to some of the names on this list however, as we look at the five youngest players in World Cup history.

The World Cup’s first ever teenage sensation, Pele announced his arrival as a superstar during the 1958 finals in Sweden.

The 17-year-old became the competition’s youngest ever player, goalscorer and winner as Brazil were crowned world champions for the first time. After recovering from knee problem that delayed his initial impact, Pele burst into life during the knockout stages.

He scored the decisive goal in the quarter-final win over Wales, before scoring a stunning hat-trick as Brazil thrashed France in the last four. Pele added two more goals in the final, taking his total to six for the tournament. His brace in the final made Pele the only teenager to have scored in a World Cup decider, until Kylian Mbappe also achieved the feat in 2018.

It was the start of a glorious career for Pele, who remains remembered as one of the greatest footballers of all time. He is the only man to have won the World Cup on three occasions, having followed Brazil’s 1958 triumph with further successes in 1962 and 1970.

There is perhaps no player more synonymous with the World Cup than Pele.

Salomon Olembe broke into the Cameroon side as a teenager and made his World Cup bow as a substitute in 1998.

The midfielder came off the bench against Austria, before starting Cameroon’s fixtures against Italy and Chile as the Indomitable Lions exited at the group stage.

Olembe later formed part of the squad that won back-to-back Africa Cup of Nations crowns in 2000 and 2002, though never again featured at a World Cup despite winning 64 caps for the national side.

At club level, he won the Ligue 1 title with Nantes in 2000/01 and later had short spells in England with Leeds United and Wigan.

Femi Opabunmi was included in Nigeria’s squad for the 2002 World Cup, after impressing as part of the side that finished as runners-up to France at the 2001 FIFA U-17 World Championship.

Opabunmi ended that tournament as runner-up for the Golden Boot with five goals – including a quarter-final hat-trick against Australia – and joined the senior side in Japan and South Korea the following summer.

The Super Eagles struggled in a tough group containing Argentina, Sweden and England, though Opabunmi was handed his World Cup debut as a substitute during a goalless draw with the latter.

Opabunmi was unable to build on his early promise however, and was forced to retire from football in 2006. The winger is now blind in one eye after suffering from serious glaucoma, a condition which brought an end to his career.

Samuel Eto’o was the second 17-year-old to feature for Cameroon at the 1998 World Cup, breaking the record as Cameroon’s youngest player at the tournament that was set by teammate Salomon Olembe just days earlier.

Eto’o had made his debut for the national side aged 15 and went on to represent Cameroon in four different tournaments. He scored just two goals at the World Cup for the Indomitable Lions, but retired as Cameroon’s most celebrated player.

One of the finest forwards in the world at his best, he was named as African Player of the Year on a joint-record four occasions and won the Champions League three times during spells at Barcelona and Inter Milan.

Despite disappointment at the World Cup, he tasted success with Cameroon at international level and formed part of the team that won Olympic Gold in 2000, and which won back-to-back Africa Cup of Nations titles in 2000 and 2002.

The leading scorer in Africa Cup of Nations history, he retired as Cameroon’s most capped player and all-time leading scorer, with 56 goals in 118 caps.

Norman Whiteside is the youngest ever player to have appeared at a World Cup, having featured for Northern Ireland in 1982.

The forward was a precocious talent who set a number of records following his exciting emergence, including becoming the youngest goalscorer in a League Cup and FA Cup final and the youngest ever Manchester United goalscorer, in addition to his World Cup record.

Happy Birthday Norman Whiteside 🎂He remains the youngest player ever to play in a @FIFAWorldCup 👊 pic.twitter.com/0rjvc0NGiM

He had played just two competitive games at club level before his inclusion in Northern Ireland’s squad for the 1982 tournament, where he featured as part of the team that reached the last eight, beating host nation Spain to top the group.

Whiteside featured again as Northern Ireland reached the 1986 tournament and scored his first World Cup goal with a deflected free-kick against Algeria. He was forced to retire due to knee issues aged just 26 in 1991, having scored nine goals in 38 caps for the national side.