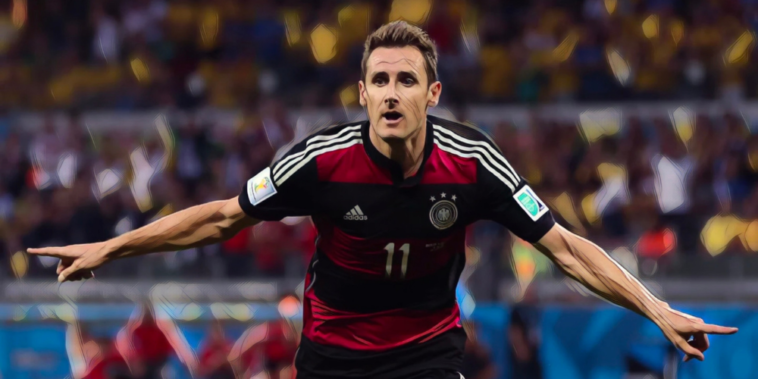 Legacies are often formed on the World Cup stage, a tournament which takes place every four years and brings together the finest footballers on the planet.

Producing a prolific World Cup tournament can write a forward into the sport’s history books and the Qatar edition will provide another chance for the game’s current crop to be truly remembered.

Ahead of the 2022 World Cup, we take a look at the five highest scoring players in the competition’s history.

Perhaps the player most synonymous with the World Cup, Pele’s sensational emergence at the 1958 tournament is the stuff of sporting legend.

The brilliant Brazilian was just 17-years-old when he fired the South Americans to success in Sweden, announcing his arrival on the world stage with six goals.

Pele scored a hat-trick in the 5-2 semi-final win over France, before netting twice more as the host nation were beaten in the final to crown Brazil world champions.

He represented Brazil at a further three tournaments and is the only player to own three World Cup winners’ medals, having also enjoyed success in 1962 and 1970.

Pele scored 12 goals in just 14 games at the World Cup, part of a haul that makes him Brazil’s all-time leading scorer with 77 goals from 92 caps.

Just Fontaine ranks fourth among the World Cup’s all-time leading goalscorers, despite having featured in just one tournament,

Fontaine’s 13 goals at the 1958 World Cup won him the Golden Boot and remains the highest-scoring single tournament ever.

The Frenchman scored 13 goals in just six games as Les Bleus reached the semi-finals in Sweden, including a four-goal haul as West Germany were thrashed 6-3 in the third place play-off.

Fontaine was unable to add to his haul after France failed to quality for the 1962 tournament, while he announced his retirement in July of that year after suffering from recurring injuries.

He called time on his career having scored 30 goals in just 21 games for France at international level.

Gerd Muller remains one of the greatest goalscorers the game has seen, having scored 654 club goals during a staggering career in German football.

Muller was a prolific presence for club and country during the 1960s and 1970s, plundering 68 goals in just 62 caps for West Germany.

The forward scored 14 of his goals in World Cup fixtures, including ten in just six games as West Germany reached the semi-finals in 1970.

🔙 #OnThisDay in 1967 Gerd Muller scored his first West Germany goals – four of them in a 6-0 rout of Albania. 'Der Bomber' went on to win the Golden Boot at the 1970 #WorldCup and hit the winner in the 1974 Final 💣#ThrowbackThursday | @DFB_Team_EN pic.twitter.com/JxBSSfwvPj

Muller won the tournament’s Golden Boot, before claiming the Ballon d’Or for his performances. Four years later he formed part of West Germany’s victorious side on home soil, scoring the final winner as the Helmut Schön’s side came from behind to beat the Netherlands 2-1 in Munich.

He retired following that success, having scored 14 goals in 13 World Cup appearances.

O Fenômeno was an unused member of Brazil’s 1994 winning squad after travelling to the tournament as a teenager, before arriving at France ’98 hailed as the world’s finest footballer.

He starred during a brilliant individual tournament, scoring four goals to be named as the World Cup’s Best Player.

Ronaldo’s goals fired Brazil to the final, but a seizure suffered on the afternoon of the final saw the forward struggle as the South Americans were beaten by France.

⚡️ @Ronaldo had suffered France 1998 agony and barely kicked a ball in two-and-a-half years before the next #WorldCup began. Unbelievably, 'The Phenomenon' hit 8 goals in 7 games, including both in the final, to crown Brazil 🏆@CBF_Futebol | #OnThisDaypic.twitter.com/KBNeZ8SRPL

Career-threatening injuries followed, but he made amends at the 2002 World Cup after an arduous two-and-a-half-year road to recovery. Ronaldo scored eight goals – including both in the final to crown Brazil world champions – to win the Golden Boot.

Miroslav Klose burst onto the scene at the 2002 World Cup, scoring a hat-trick of headers as Germany thrashed Saudi Arabia 8-0 in his tournament debut.

He ended that tournament with five goals, before a remarkable run of consistency and longevity secured his place as the World Cup’s greatest goalscorer.

A hat-trick of identical goals on his World Cup debut! 🤩

During #KoreaJapan02, a young Miroslav Klose introduced himself to the world! 🇩🇪 pic.twitter.com/73RWa6V8vA

Klose scored five times in 2006 and added a further four goals in 2010, before reaching his record-breaking total of 16 during Germany’s victorious 2014 campaign in Brazil.

Remarkably Klose, who also became Germany’s all-time record goalscorer with 71 goals from 137 caps, scored more than 16 league goals in a season just once across his entire club career.