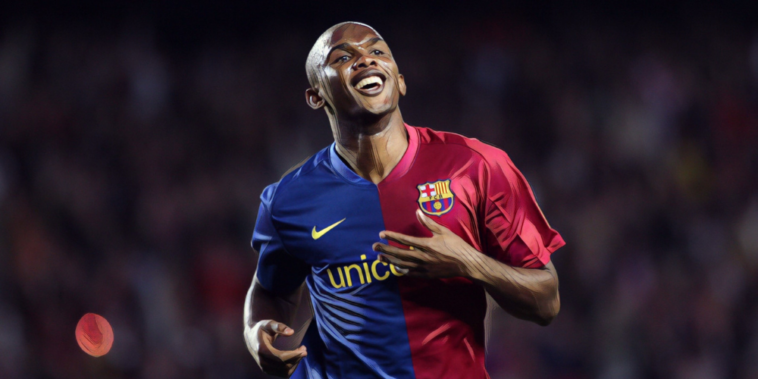 Since the turn of the century, European football has been home to some truly great goalscorers. Few of those, however, can match the achievements of Samuel Eto’o.

The argument as to who is Africa’s greatest ever footballer is one that can be debated long into the night, but there are not many who have as compelling a case as the clinical Cameroonian.

On eight occasions during his career, Eto’o found himself in the top three for Africa’s Footballer of the Year Award, standing top of the podium a joint-record four times.

Eto’o’s tale is one of storied success, from humble beginnings in Cameroon to the shining light on the sport’s biggest stages. His early education in football came at the prestigious Kadji Sports Academy, where his rich potential was spotted by a Spanish superpower.

Real Madrid made a move to bring Eto’o to Europe, where he spent time with the club’s second side and was later loaned to Leganes and Espanyol. Unable to break in at the Bernabeu, a third loan spell proved the making of the forward, a run of goals at Mallorca persuading the island club to sign Eto’o on a permanent basis from the capital club.

Mallorca’s faith had seen the side invest a club record £4.4m to sign the Cameroonian centre-forward, an investment that Eto’o soon began to repay with his preferred currency – goals.

Eto’o scored 70 goals in just 165 appearances across four seasons with Mallorca, firing a successful period that included Champions League qualification and silverware in the form of the 2002/03 Copa del Rey.

Eto’o’s exploits had piqued the interest of leading sides, however, and in 2004 he completed a move to Barcelona. Having been granted a second shot at one of Spain’s biggest clubs, it was one he was determined to grasp.

Barcelona was a team in transition under Frank Rijkaard, but the arrival of Eto’o – alongside Deco and Rafael Marquez – contributed to a first league title in six seasons.

Eto’o was at the centre of the success after scoring 25 league goals, continuing his elevation to elite status among Europe’s finest forwards.

He was named as Africa’s Footballer of the Year for a third consecutive campaign after helping Barcelona defend their La Liga title the following season, his 26 goals enough to win the Pichichi Trophy as Spain’s leading scorer.

Eto’o’s most crucial contribution came in the Champions League, however, scoring six goals – including an equaliser in the final win against Arsenal – as Barcelona were crowned European champions for the first time since 1992.

Rijkaard had built a talented side and Eto’o provided the Catalans’ cutting edge, needing just a glimpse of goal to punish sides as the likes of Ronaldinho, Deco and Andres Iniesta carved out chances.

Eto’s fortunes faltered across the following two seasons as injuries restricted his involvement, but he remained a regular source of goals and troubled teams with his movement and accuracy around goal.

The summer of 2008 then brought change to Catalonia, as Pep Guardiola was appointed as the new manager of Barcelona.

Guardiola had only coached the club’s B side, his appointment viewed as something of a gamble. The Spaniard sought instantly to make changes, including deciding that key components of the past regime were now surplus to requirements.

Eto’o, alongside Deco and Ronaldinho, were told in no uncertain terms that their time with the club was over. As the latter duo were ushered out the exit door, Eto’o remained with a point to prove, having convinced Guardiola he could be a part of the new project.

Eto’o responded with the finest football of his career as Barcelona completed the most historic season in their history. The Cameroonian formed a potent forward line alongside Thierry Henry and Lionel Messi, as the Spanish side swept all before them to win a La Liga, Copa del Rey and Champions League treble.

Eto’o was sensational for much of the campaign, scoring successive first-half hat-tricks in home wins over Almeria and Real Valladolid, the latter on the wrong end of a four-goal blitz from Barcelona’s brilliant number nine.

Between them, Eto’o, Henry and Messi scored a century of goals with the former netting 36 in all competitions, finishing as runner-up to Diego Forlan for the Pichichi Trophy and making another decisive Champions League contribution.

Barcelona had been on the backfoot during the early stages of the Champions League final, but Eto’o’s opener – prodded inside Edwin van der Sar’s near post – set the side on their way to a 2-0 win over Manchester United in Rome.

Eto’o had been a crucial component of an all-conquering side under Guardiola, though just months later his exit from Barcelona was confirmed.

In one of the most stunning transfer deals in recent memory, the Spaniards sanctioned the sale of Eto’o to Inter Milan, allowing one of European football’s great goalscorers to be used as a makeweight in their pursuit of Zlatan Ibrahimovic.

While Ibrahimovic proved an awkward fit under Guardiola’s regime, Eto’o continued to excel upon his arrival in Italy.

The arrival of the forward alongside an eye-catching £40m allowed Jose Mourinho to rebuild, with fellow signings Wesley Sneijder, Diego Milito, Lucio and Thiago Motta building a formidable core.

Already established as Italian football’s dominant force in the post-Calciopoli scandal era, it was a transfer window that saw Inter reach new levels.

Milito’s role as the Nerazzurri’s number nine saw Eto’o adopt a different role roving from the right, a greater emphasis placed on his defensive work in a team that became notoriously difficult to beat.

Given his reputation as an outstanding centre-forward it could be forgiven should Eto’o’s ego have been bruised with the change, but the forward instead adapted with immaculate application to form part of a record-breaking side.

Mourinho’s side were crowned champions after beating Roma in the title race, scoring more goals and conceding less than any other side in the division. Roma were also beaten in the final of the Coppa Italia to seal a domestic double, but it was in Europe where Eto’o wrote his unique piece of legend.

Inter Milan reached the Champions League final with Eto’o central to their run, scoring a crucial opener in a group game with Rubin Kazan, before firing home a vital winner as Chelsea were beaten in the last 16.

The semi-finals saw Eto’o face his former side in Barcelona, a meeting with the defending champions and a clash between Mourinho’s pragmatism and Guardiola’s tiki-taka.

Inter came from behind to win an entertaining first leg, as Mourinho’s counter-attack caused chaos for the Catalans in a compelling Champions League tie.

Mourinho described the second leg as a ‘miracle, as Inter – reduced to 10 men following Thiago Motta’s red card at the Camp Nou – ground out the result needed to progress to a final against Bayern Munich.

For Eto’o it was a sweet moment, an against-the-odds upset of the club that had overlooked their talents. Forced out at Barcelona the previous summer, here he was proving he still belonged on the biggest stage.

Milito’s brace in the final crowned Inter champions of Europe for the first time since the second of back-to-back successes in 1965 and made Eto’o the only player in history to win consecutive trebles with two different clubs.

Eto’o added a second Coppa Italia and the Club World Cup the following season in a prolific campaign that delivered 37 goals in all competitions, before departing for Russia as a cash-rich Anzhi Makhachkala sought to make a statement.

The goals continued in the colder climate but the well soon ran dry for Anzhi, with the latter period of Eto’o’s career spent in various European leagues as he took in spells with Chelsea, Everton, Sampdoria, Antalyaspor and Konyaspor, before the curtain came down after a stint in Qatar.

Eto’s retirement brought an end to the chapter of arguably Africa’s greatest talent, and most certainly Cameroon’s most iconic sporting star.

Having won back-to-back Africa Cup of Nations titles with the Indomitable Lions in 2000 and 2002, he ended his international career as the nation’s record scorer with 56 goals, an unrivalled 18 of which came in AFCON tournaments.

It’s an incredible legacy and one which made Eto’o one of the finest forwards of his generation. From the menacing Mallorca youngster with a point to prove, to his brilliant best at Barcelona and his integral role in Inter Milan’s greatest triumph.