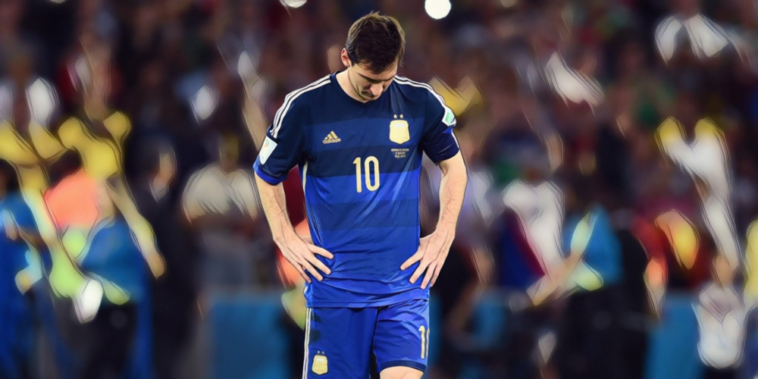 Lionel Messi will take part in his final World Cup this winter, with the Argentine genius attempting one last challenge at winning football’s biggest prize.

Messi, of course, has come close before. In 2014 he was named as winner of the tournament’s Golden Boot after leading Argentina to the final. However, he missed out on the ultimate success in Brazil, as La Albiceleste lost a nervy final 1-0 to Germany at the Maracana.

As Argentina prepare for another World Cup challenge, we remember the team that lost the 2014 final.

Romero was the hero of the semi-final shootout win over the Netherlands, saving two spot-kicks to book Argentina’s place in the final.

The goalkeeper had a disappointing domestic campaign leading up to the tournament as second-choice at Monaco, but was named Argentina’s number one and impressed in Brazil. The following summer he signed for Manchester United and forged a reputation as one of the Premier League’s best number two goalkeepers, as he provided competition and cover for David de Gea across six seasons at Old Trafford.

He retired from international football in 2018, having made 96 appearance for Argentina. No goalkeeper has ever made more.

Pablo Zabaleta was a dependable presence for club and country during a long career of success. The right-back’s best football came at Manchester City, where he became a firm fans’ favourite and won two Premier League titles.

He signed for the Citizens from Espanyol in 2008 and made 333 appearances for the club in all competitions, forming a central part of the side that became challengers for major trophies following their billionaire takeover.

Zabaleta won 58 caps for Argentin, including in the 2014 World Cup final where he produced a performance of characteristic commitment despite ending up on the losing side.

Martin Demichelis had joined Zabaleta at Manchester City the previous summer and endured a difficult debut season in English football.

The veteran centre-back had won four Bundesliga titles during a previous spell at Bayern Munich, but struggled to adapt to the pace and demands of the Premier League. He was an imposing figure during Argentina’s World Cup campaign however, with his experience key to four clean sheets on the run to the final.

He largely shackled Miroslav Klose during a cagey final in Rio de Janeiro.

Another impressive performer as Argentina’s run to the final was built on a defensive foundation. La Albiceleste failed to conceded a goal in 443 minutes during the knockout stages, before Mario Gotze’s extra-time goal broke Argentine hearts in the final.

Garay had earlier formed part of the Argentina team that won the u-20 World Cup in 2005, featuring alongside 2014 teammates in Pablo Zabaleta, Lucas Biglia, Lionel Messi and Sergio Aguero.

At club level, Garay represented a number of Spanish sides including Real Madrid and Valencia, while he won league titles in Portugal and Russia at Benfica and Zenit St Petersburg respectively.

Marcos Rojo’s performances caught the eye in Brazil, with Manchester United making a move to sign the full-back from Sporting Lisbon at the conclusion of the tournament.

Rojo scored his first international goal in the group stage with the winner in a 3–2 victory against Nigeria and was the only Argentina player named in the World Cup’s All-Star XI, based on the Castrol performance index.

He struggled to cement himself as an integral part of the United set-up during seven seasons in English football, but won the FA Cup, League Cup and Europa League.

Javier Mascherano is regarded as one of the great midfielders of his generation and was a crucial part of Argentina’s run to the final.

Combative and committed as he snapped into challenges at the base of the midfield, Mascherano’s game was one built on intensity and tactical intelligence. He won 147 caps for Argentina, a national record until Lionel Messi surpassed his total in 2021.

A legend has hung up his boots – Congratulations on a stellar career Javier Mascherano 🌟 pic.twitter.com/G3o5pxL2GI

At club level he represented West Ham, Liverpool and Barcelona after moving to Europe and enjoyed a decorated career with the latter. He won five league titles, five Copa del Rey and two Champions League titles during his time at the Camp Nou.

An understated part of the Argentina side, Biglia slotted into midfield alongside Mascherano with the task to stifle the opposition.

Biglia began the tournament out of the side but started every fixture from the quarter-finals onwards. He also featured prominently as Argentina reached the final of the 2015 Copa America, where La Albiceleste suffered heartbreak again with a penalty shootout defeat to hosts Chile.

Biglia won four league titles in Belgium with Anderlecht, before spells in Serie A at Lazio and AC Milan.

Enzo Perez came into the side following an injury to Angel Di Maria in the last eight, starting both the semi-final and final.

He was unable to replicate the creativity of his absent teammate however, producing an ineffective performance in the final before his late substitution for Fernando Gago.

Perez’s best football came at Benfica and he was named as the Primeira Liga Player of the Year after helping the Portuguese side to the title in 2013/14. He has also won the Copa Libertadores with two clubs, first with Estudiantes in 2009 before a second triumph at current club River Plate in 2018.

Lavezzi came to prominence when he formed part of a brilliant forward line at Napoli, starring alongside Edinson Cavani and Marek Hamsik in Naples.

After five seasons he joined Paris Saint-Germain, where he won four league titles after becoming one of the first marquee additions of the club’s billionaire backed regime.

Lavezzi was a regular with Argentina and scored twice as the national side won the Olympics in 2008. He failed to replicate that success with the senior team however, losing in the World Cup final and twice in the Copa America decider.

The winger was a constant threat against Germany but was replaced at half-time in the final, with Sergio Aguero on as his replacement.

Lionel Messi was the marquee name in Argentina’s side and came agonisingly close to winning a first major honour with the national team.

Messi had starred during the group stage with four goals, including a stunning late winner against Iran. He failed to score during the knockout rounds, but was an important part of Argentina’s run to the final.

Despite defeat, he was named as winner of the Golden Ball at the end of the tournament, but had to wait until 2021 to taste his first success with Argentina. Messi captained Argentina to Copa America success, ending a 28-year wait for a major trophy. It has been an arduous route for the seven-time Ballon d’Or winner, who had suffered four previous final defeats.

He is now Argentina’s all-time record goalscorer and appearance maker, having scored 91 goals in 165 caps. He and Argentina are primed for a genuine challenge in Qatar.

Gonzalo Higuain was chosen at centre-forward ahead of Argentina’s embarrassment of riches, with Sergio Aguero and Rodrigo Palacio left on the bench.

Higuain scored prolifically during a long career in European football, netting 278 goals across spells with Real Madrid, Napoli and Juventus.

He netted 31 goals in 75 games for Argentina at international level, but endured a performance to forget in the final. Higuain wasted a glorious early chance after a mistake from Toni Kroos and saw a goal disallowed for offside as he failed to time his run. He was substituted for Palacio after 78 minutes.