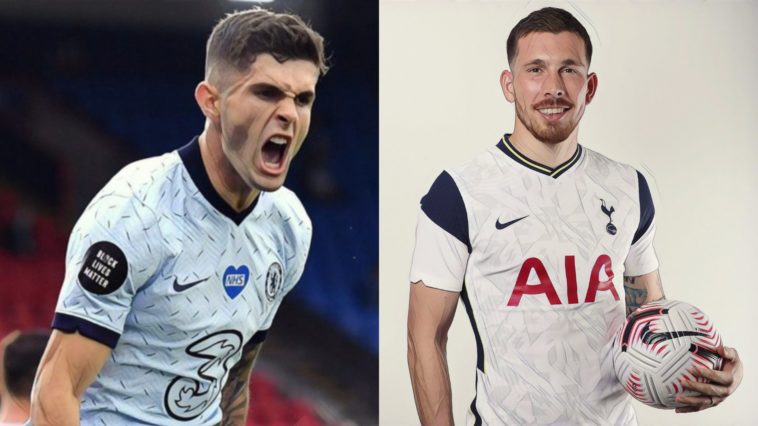 Another season, another spate of new kits flooding into the market. We all love a good kit, but the sheer number of new releases every year mean a significant number are not high quality. Here are some of the latest Premier League efforts that left us distinctly underwhelmed.

Chelsea home kits under Nike have been the definition of underwhelming, bringing none of the originality and quality design for which the American sports manufacturer are highly regarded. The latest effort is so dull it will put you to sleep.

Meanwhile, Chelsea‘s away kit is a slight upgrade, but wouldn’t look out of place upholstered on a bus seat. And the Three sponsor is obviously hideous.

Introducing our new @nikefootball 20/21 away kit. Inspired by a classic tailored aesthetic but filtered through a modern street lens and colour palette.

First thing’s first: it looks like a big red erection right up the middle of the jersey. Just have to get that out there. Beyond that, on reflection I don’t dislike Crystal Palace‘s set of kits as much as I did on first glance. Smart, clean, nice colour pallette, this is a decent Puma template.

The white one is the best of the lot, the blue is fine, nothing more, but I’m not sold on the black one at all. But still: big red erection.

The most iconic football kits of the nineties

It’s made by Hummel, so it’s still good design-wise, but I look at this and can’t help but think: so much yellow. Tone it down just a smidge, please.

This isn’t even a bad jersey, probably mid-table if we were ranking all of the home kits in the Premier League, but I’m honestly just tired of Manchester United home jerseys at this point. New United releases used to feel like an event, now it just feels like a chore.

Starting as we mean to go on in our new @adidasfootball home kit ?#MUFC pic.twitter.com/VFFTnQwRv3

Puma describe Newcastle United‘s new away kit as “fizzy yellow”, but in reality it just resembles a Watford kit that has faded after too many washes. The home kit, as ever, would be dynamite if it wasn’t for the wojous sponsor emblazoned across the middle of it, while the purple third kit is actually a decent effort.

What do you think? ? pic.twitter.com/ofFtn8ugG4

The geometric pattern embedded in the torso of Tottenham Hotspur‘s new home kit is interesting, but ultimately it feels like there is a bit too much going on. The collar is good, but the wide blue bands don’t work. I would have gone for a thin band around the edge of the sleeve, with blue and yellow details to match the collar.

"I’m going to learn from so many things from last season, and I'll try to improve next season as well."

Look, it’s not the worst, but they’ve modelled the design on a barcode. That should be an automatic points deduction for West Brom, although they previously had this exact design in 1992/93.

Send us your pics wearing either our home or away @pumafootball 2020/21 shirts and we'll RT a few! ?

Read: The best new Premier League jerseys of the 2020/21 season

See Also: From the Bruised Banana to the Thunderbolt, Arsenal’s greatest away kits