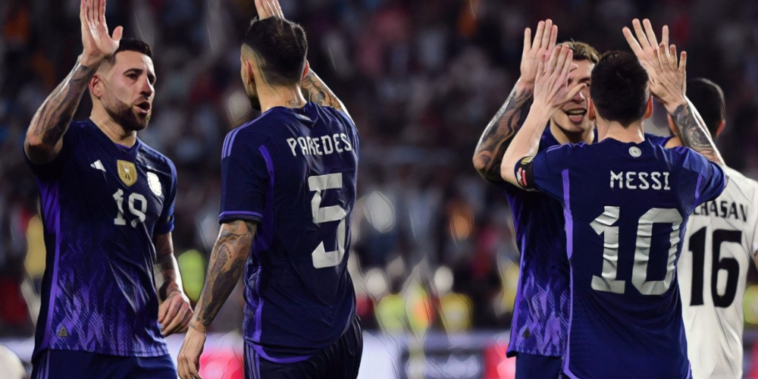 The FIFA World Cup kicks off in Qatar this weekend as the watching world pauses for sport’s biggest global event.

Ahead of the World Cup our team of writers have made their predictions for Qatar, with selections likely to contain the usual mixed bag of accuracy and wildly wrong picks.

From choosing the world champions, to the Golden Boot winner and tournament’s surprise package, here are our World Cup predictions.

Harry Diamond: I think this is a tournament that favours the South Americans and I’ll side with Argentina. Momentum is with La Albiceleste after a long unbeaten run and their path to the last four looks clearer than Brazil’s. Lionel Messi’s fine form only increases their chances.

🤯 A 36-match unbeaten run heading into the #FIFAWorldCup

🇦🇷 @Argentina looks like they're ready for #Qatar2022 pic.twitter.com/RtWGam63fB

Ste Tudor: Brazil are the most complete side at the tournament and boast a wealth of attacking talent. With so many Premier League players in their squad don’t be surprised if we – Britain – jokingly take some credit for their glory come December.

Vishnu Anandraj: Argentina – They were hugely impressive in qualifying, have solid depth in most positions, a very balanced and effective midfield, and have built the team effectively around Messi to maximise his strengths without being overly reliant on him.

Player of the Tournament:

Peter: Neymar will cement himself as an all-time great.

Ben: If Argentina are winning it, then Messi will be instrumental to their chances.

Harry: It’s difficult to back against Messi, having picked Argentina as champions. He didn’t deserve the Golden Ball in 2014 in truth, but he just might in Qatar.

Ste: This will be Neymar’s last World Cup and this is his time.

Peter: Jamal Musiala, the boy’s a bit special innit. Musiala’s teammate Youssoufa Moukoko also looks like a world-class talent in the making, although I doubt we’ll see too much of the teenager in this tournament.

Ben: Jamal Musiala – It may not be the greatest Germany side of all time, but they often up their game for the major tournaments and the Bayern Munich midfielder has been in fine form, scoring nine goals and providing six assists in 14 Bundesliga outings so far.

Two assists on the day he becomes the youngest Bayern player to reach 100 appearances.

Harry: I’m backing the South Americans to go deep into the tournament, so I’ll be the sole omission from the Jamal Musiala fan club for this one. Vinicius Junior hasn’t quite caught fire for Brazil to date, but has developed into one of world football’s most exciting talents at Real Madrid. The prospect of him combining with Neymar will terrify defenders.

Ste: Jamal Musiala has to be in the running.

Vishnu: Jamal Musiala – He’s been one of the few consistent bright sparks in a somewhat underwhelming Bayern Munich side, and it’ll likely be a similar story for his performances with Germany.

Peter: Despite his many shortcomings Romelu Lukaku’s record of 68goals in 102 international games is sensational. I fancy Belgium to steamroll Morocco and Canada in the groups and then go deep, with big Rom bagging a hatful along the way.

Ben: Neymar – The Brazilian star has had a great start to the season with PSG and could rack up the goals in a group containing Cameroon, Serbia and Switzerland.

Harry: Messi is again an obvious choice, but I’ll go for teammate Lautaro Martinez. He has a better than one-in-two record for Argentina and could start well in a group containing Saudi Arabia, an unconvincing Mexico and Poland.

Ste: Neymar again, though England potentially have a winnable passage to semis if they finish top of Group B. With five or six games to do some damage, it’s perfectly conceivable that Harry Kane becomes the first-ever player to win two Golden Boots.

Vishnu: Aleksandar Mitrovic – If he’s fit, Mitrovic has been in fine scoring form and Serbia play a very aggressive, attacking style. I would expect him to score plenty in the group stage.

Peter: Boring I know, but for me it’s Neymar. As unlikeable as he is at times, his talent is off the charts and when he’s on it, he’s a truly unique and magical footballer to watch.

Ben: Hannibal Mejbri – The Manchester United youngster somewhat strangely has as many club appearances (18) as he does international caps for Tunisia, and the 19-year-old will likely be a starter for the North African outfit as they look to get out of a group containing France, Denmark and Australia.

Harry: I’m fascinated to see how Cody Gakpo performs on the biggest stage. He has been sensational this season, but the Eredivisie can be a difficult barometer when assessing a player’s talent. Some strong performances in Qatar will increase his growing list of suitors.

Cody Gakpo is the first player in top-flight European football to be directly involved in 30 goals in 2022/23:

Ste: In the group stages I hope Hakim Ziyech impresses for Morocco, because I feel he’s a wasted talent at Stamford Bridge. It’s going to be fascinating to see what Messi produces on his global swansong.

Vishnu: Cody Gakpo – It’s no secret he has been doing phenomenally in the Eredivisie and I think he’ll be one of the more exciting and effective attacking players in the tournament.

Peter: England. Have had pretty favourable draws in the last couple of tournaments and after looking stodgy as f*** over recent games I reckon Southgate’s reign is set to end on a whimper.

Ben: England – Even Lionel Messi has said that Southgate’s side are among the top three in the world, but there aren’t too many of the England squad that come into the tournament in form. That coupled with Southgate’s less than attractive brand of football could end in an early exit.

Harry: I’m not sure Belgium or Croatia are as strong as past tournaments. Drawn together in Group F, both should have enough to progress. However, Germany and Spain are likely to await in the round of 16.

Ste: Ronaldo hopefully, but that comes from a Manchester City-supporting perspective. As for teams, reigning champs France may start slow and I wouldn’t be surprised if either Australia or Tunisia pulled off an upset against them. It’s also not a given that both Germany and Spain progress from Group E. Croatia and Mexico are also unfancied.

Vishnu: Portugal – Fernando Santos is a very reactive coach and while they have plenty of talent, they’re likely to squander it. The recent Ronaldo saga also could not have had a great effect on morale.

Peter: Poland reach the semis after beating France in the quarters.

Ben: While everyone has been talking up the likes of France, Brazil, England and Argentina, Louis van Gaal’s Netherlands are on fine run of form and are unbeaten since their exit at last summer’s Euros.

Harry: Serbia qualified for the World Cup in unbeaten fashion, topping a group containing Portugal to secure their place in Qatar. Serbia have never reached the knockout round as an independent nation, but a team containing a frontline of Dusan Vlahovic and Aleksandar Mitrovic has the potential to upset the odds. With Dusan Tadic and Sergej Milinković-Savić creating the chances, that duo could thrive. A probable last-16 tie with Portugal or Uruguay will hold no fears.

We know who our team is now 😂 pic.twitter.com/vLEAE2JQ0R

Ste: Senegal could have a decent tournament but that entirely depends on Sadio Mane’s fitness. Wales are also a shout to reach the quarter-finals and return as heroes.

Vishnu: Serbia – They have an attacking style and a quietly good squad. Expect them to make it quite far in the tournament.

Peter: I’m a sucker for an Argentina kit, and both the home and away are quality this time round.

Ben: The French home kit is a thing of beauty. Nike have produced a simple yet elegant design, with the deep blue massively complimented by the gold detailing.

Harry: I’m a big fan of the French blue. Mexico and Japan, as ever, have also produced great shirts.

Ste: The Mexico away is a work of beauty.

Shirts to look out for at the World Cup | Part One

Starting with the glorious Mexico away 🇲🇽

How far will England go?

Peter: Scrape through the group before being knocked out in round of 16.

Ben: As mentioned, they could struggle to match their 2018 run to the semi-finals. Quarters at best this time I’m afraid.

Harry: Quarter-final. It will likely be France or Argentina in the last eight, perhaps a step too far for Gareth Southgate and his side.

"A balanced group of young players and experienced players." 🤝

Ste: Logic says they go fairly deep. But a hunch says they exit at the last 16 stage.

Vishnu: Quarter-finals – Previous tournaments have seen England be very reliant on set-pieces and somewhat dull in open-play. I expect more of the same, but for them to be less prolific from the rare chances they create.