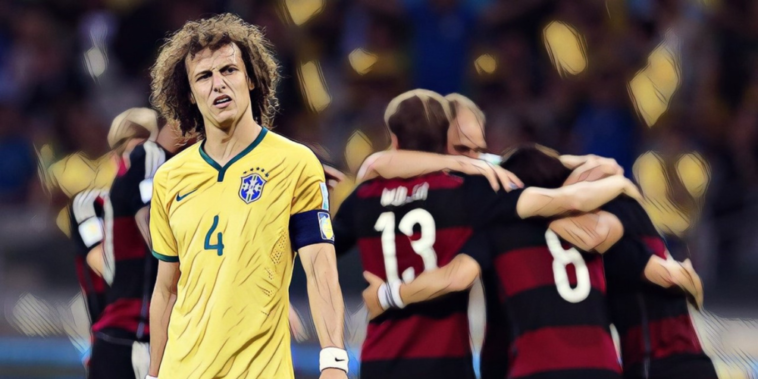 The 2022 FIFA World Cup has begun and the latest chapter in the tournament’s storied history will be written in Qatar across the coming weeks.

Each edition of the World Cup has produced iconic imagery that is etched into the memories of football fans and we’ve decided to look back and remember some of the most memorable moments from past tournaments.

Pele becomes a superstar in Sweden

Perhaps no player has defined the World Cup more than Pele. The world was introduced to one of the game’s all-time greats in 1958, as Brazil’s love affair with the competition began in Sweden.

The star of the Selecao’s success was a teenage Pele, who at just 17-years-old was the inspiration for Brazil’s brilliant side. A knee problem delayed Pele’s impact at the tournament, but he burst into life during the knockout stages.

Pele scored the decisive goal as Brazil beat Wales 1-0 in the quarter-final, becoming the youngest ever World Cup goalscorer in the process, before scoring a stunning hat-trick as the South Americans thrashed France in the last four.

In the final against the host nation, Pele helped Brazil banish the demons of their 1950 final loss on home soil. In the second half, he was simply outstanding. His first goal, to this day, remains one of the greatest ever scored in a final.

There appeared little danger as a hoisted cross into the area found Pele’s chest with his back to goal. As the ball dropped, he lifted it over the onrushing defender before volleying past the Swedish goalkeeper. A second goal helped Brazil to a 5-2 win and the legend of both Pele and the competition’s most successful ever side began in Solma.

For a nation that prides itself on the invention of football, England – as a nation – haven’t really been that successful

Just one World Cup has been won in the Three Lions’ history, with Geoff Hurst the hero of their victory on home soil. An entertaining final saw England edge West Germany 4-2 in extra-time and Hurst’s second goal of an iconic hat-trick has remained a source of controversy.

Hurst hammered an effort against the underside of the crossbar, with linesman Tofiq Bahramov adjudging that the ball had crossed the line. It was a moment that swung the momentum back in England’s favour and Hurst completed a late hat-trick on the break at Wembley. He remains the only man to have scored a treble in a World Cup final.

Brazil are the World Cup’s most successful nation, having been crowned world champions on five occasions. Perhaps their greatest vintage was the 1970 edition, a team of Samba stars who swaggered to success in Mexico.

Brazil’s 4-1 win over Italy at The Estadio Azteca remains arguably the most complete final performance of all time, a game which saw Mário Zagallo became the first man to win the World Cup as a player (1958, 1962) and a coach, and Pelé the first – and so far only – three-time World Cup winner.

The highlight was a sublime fourth goal, as Carlos Alberto provided a thumping final touch to a free-flowing team move. All but two of Brazil’s outfield players were involved in the goal, a passage of fine football filled with the flair and fluidity that saw the world fall in love with the South American side.

The beautiful game in its purest form.

Italy manager Enzo Bearzot was criticised for his selection of Paolo Rossi for the 1982 World Cup, with the forward having only recently resumed his playing career after a two-year ban for his involvement in a Serie A match-fixing scandal.

Rossi went from zero to hero at the World Cup however, as he starred for the Azzurri in Spain. He scored six goals to win the tournament’s Golden Boot and Golden Ball accolades, as Italy won their third World Cup.

This Paolo Rossi treble against Brazil was something else 🤩

The defining moment of his tournament came against Brazil, as Rossi’s hat-trick proved the difference in a thrilling quarter-final between the sides.

An enthralling last-eight encounter saw Italy beat Brazil 3-2, with Rossi scoring each of the Azzurri’s goals in a fixture remembered as one of the World Cup’s greatest games.

The ‘Hand of God’

Diego Maradona was the finest footballer in the world at his best. For some, he remains the greatest talent the game has ever seen.

Maradona was the inspiration behind Argentina’s run to World Cup success in 1986, where his performance against England in the last eight remains the stuff of legend. Tensions between the teams had been heightened given the Falklands War just four years earlier, before a moment of improvisation – and injustice – incensed the English.

Maradona scored two unforgettable goals in a 2-1 win at the Estadio Azteca in Mexico City, though his first became perhaps the World Cup’s most infamous goal as he punched the opener over the stranded Peter Shilton.

As Argentina celebrated wildly, England complained to no avail. The goal stood and Maradona claimed a helping hand from a higher power. Questioned in the post-match press conference on how he had scored, Maradona said “A little with the head of Maradona and a little with the hand of God.”

Diego Maradona’s ‘Goal of the Century’

From the World Cup’s most controversial goal to perhaps its greatest, scored just four minutes apart.

Moments after his ‘Hand of God’ incident, Maradona embarked on a scintillating solo run that left a trail of England defenders in his wake to score a truly glorious goal.

It was a run that began inside his own half, with Maradona’s fine footwork seeing him pirouette away from Peter Beardsley and Peter Reid before bursting forward and accelerating into opposition territory. Terry Butcher and Terry Fenwick provided little resistance as the South American skipped past further England challenges, before rounding Peter Shilton and sliding in from an acute angle.

One of the most iconic goals in #WorldCup history.#OnThisDay in 1986, a moment of pure genius from 🇦🇷 Diego Maradona✨ pic.twitter.com/iVR9upkgYW

It was mesmerising magic from Maradona, who slalomed and shimmed his way past multiple challenges to score a stunning individual effort. There’s good reason it was dubbed the ‘Goal of the Century’.

The lasting image of Roberto Baggio’s World Cup in ’94 was, unfairly, that miss.

Italy were beaten on penalties against Brazil and it was the miss of Il Divin Codino that confirmed defeat, as he blazed his spot-kick high over the crossbar at the Rose Bowl stadium in Pasadena.

Baggio’s brilliance was the main reason Italy were in the final, as he led the Azzurri’s campaign with three match-winning performance in the knockout rounds, scoring five goals.

After a goalless game the final went to a shootout for the first time, with the image of Baggio – head bowed on the penalty spot in disbelief after his skied spot-kick – etched into the World Cup archives. The stage had been set for the Italian icon to inspire his side to World Cup success, but ended in disaster with Baggio later admitting it was the worst moment of his career.

Ronaldo’s road to redemption is one of the World Cup’s greatest tales. The 1998 edition was supposed to have been his tournament, and for a short while it appeared so as the brilliant Brazilian inspired his team to the final.

Four goals earned Ronaldo the Golden Ball accolade, but he suffered a seizure on the afternoon of the final and took to the field a shadow of his usual self in one of the World Cup’s most dramatic narratives.

Following the tournament he suffered career-threatening knee injuries and there were those who believed the football world had seen the best of the game’s most exciting young talent. After an arduous two-and-a-half-year road to recovery, he was included in Brazil’s squad for the 2002 tournament and completed a remarkable redemption tale in Japan and South Korea.

Ronaldo scored eight goals – the highest single total in a World Cup since 1970 – to win the Golden Boot and inspire Brazil to success. Fittingly, he scored both goals in the 2-0 final win over Germany.

Zinedine Zidane had confirmed the 2006 World Cup would be his farewell to football and for a time appeared set to bow out in perfect fashion.

Zidane – the goalscoring hero of France’s ’98 World Cup success – starred at the finals, including a sensational performance in the quarter-final win over Brazil. The final was to be his last game and began in perfect fashion as he opened the scoring from the penalty spot.

Marco Materazzi equalised for the Italians, before the two goalscorers were involved in an unforgettable incident. After a verbal exchange in extra-time, Zidane turned and thrust his head into the chest of the Italian centre-back, a moment which showcased his occasionally short temper.

Follow Zinedine Zidane's final five minutes as a footballer in this incredible footage 🎥 😳 #OnThisDay in 2006, one moment of madness closed the curtain on a remarkable career 🇫🇷 pic.twitter.com/9cIRlTAY4k

Zidane was sent off and walked past the World Cup trophy on his way to the dressing room, the final act of an incredible career. France took the game to penalties, but lost out in a shootout without their star name.

Brazil’s defeat to Uruguay in the 1950 final was a scar that had never truly healed. As host nation and heavy favourites, the Selecao lost to their South American rivals.

64 years later the World Cup returned to Brazil and provided the record five-time winners with a chance to banish those memories. What followed, was the opening of an even greater wound. Brazil faced Germany in the semi-final and all those associated with the hosts believed destiny had their name on the trophy.

It did not turn out as planned.

A nation shocked as Brazil 🇧🇷 crashed out of the 2014 @FIFAWorldCup after a thrashing by Germany 🇩🇪 pic.twitter.com/mb34DojLB3

Germany produced an incredible performance to inflict a semi-final humiliation on the host nation, winning 7-1 to embarrass Brazil in their first competitive home defeat for 39 years.

Germany were five goals ahead inside the opening half an hour, in a fixture which has been dubbed The Mineirazo (The Mineirão Smash). It was ruthless from the Germans, both stunning and surreal. A national embarrassment in the eyes of the Brazilians and one of the most remarkable results in the competition’s history.

Read Also – Five of the biggest World Cup shocks ever