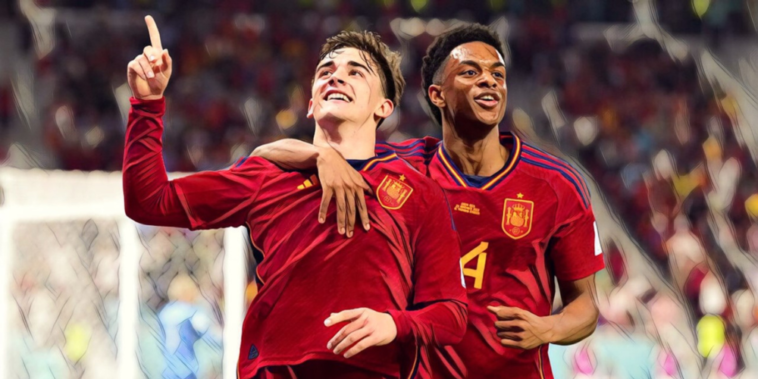 Following the first fixture for all 32 teams, we look at five talking points from the Word Cup action.

Giroud a fine wine for France

Olivier Giroud was a prominent figure in France’s success four years ago, but arrived in Qatar as back-up following Karim Benzema’s return to the international stage. Giroud has been reinstated to the side however, after Benzema was ruled out of the tournament with a thigh injury.

The 36-year-old has never been the most fashionable footballer, but remains one of the most under-appreciated footballers of his generation. He was excellent as France survived a scare to thrash Australia, scoring twice and working in brilliant tandem with Kylian Mbappe – perhaps the most decisive player in Qatar – and Antoine Griezmann.

Level with Henry on France goals at age 36 😤 pic.twitter.com/DIxmZszL8e

Giroud’s brace took him to 51 goals for France, level with Thierry Henry. No player has ever scored more in the colours of Les Bleus.

He might not be the main attraction, but Giroud can be the facilitator to France’s star-studded attack. As it was in Russia in 2018, his role could be crucial to Didier Deschamps’ search for balance.

The announcement of every England squad is filled with contention, each minor detail examined and discussed. When that squad is travelling to a World Cup, the scrutiny is only amplified and Gareth Southgate received his fair share of criticism pre-Qatar.

Among the most contentious calls was the inclusion of Harry Maguire and Raheem Sterling. Perhaps not in terms of the squad, but certainly for the starting side given their struggles for form at club level.

Maguire – Cristiano Ronaldo aside – has been perhaps the most discussed player in the Premier League in recent months, following an extended decline that has seen him lose favour at Manchester United.

Southgate has retained his trust in the centre-back and claimed England had no other defender of his profile after naming Maguire in the squad. In the first game against Iran, Maguire’s aerial prowess was a feature.

As England threatened from set-pieces the 29-year-old was the obvious target and twice went close with headed efforts, before nodding down for Bukayo Saka to rifle in the second goal. He was, however, caught out for Iran’s first goal and fans will be eager to see if that mistake was the ill-effects of his head collision moments earlier, or a continuation of the poor concentration that has littered his club form.

Sterling also justified his inclusion with another impressive performance for England. A threat all afternoon, he scored one and created Saka’s second. He has struggled to find a role for Chelsea, but executes his for England – penetrative runs into goalscoring positions – in fine fashion.

Spain underlined their credentials for a successful tournament after thrashing Costa Rica, with their 7-0 win among the most one-sided contests in World Cup memory.

Luis Enrique’s side were utterly dominant, scoring seven goals without reply as Costa Rica became the first World Cup side since 1990 to fail to register a shot on goal.

At the heart of Spain’s success was a midfield duo hoping to replicate the achievements of past stars. In Pedri and Gavi, La Roja boast two of the most exciting talents in world football and a midfield pairing to build the side around for the next decade.

It was the first time since 1962 that a World Cup team had named two teenagers in their starting XI and both were excellent as Spain dominated the game. Spain’s 537 first-half passes was the most a side has recorded since 1966.

2 – With Gavi and Pedri both starting, Spain are the first European side to name two teenagers in their starting XI for a World Cup match since Bulgaria against England in 1962 (Jechev and Sokolov). Undaunted. pic.twitter.com/KTcizPHfv3

Gavi became the youngest player to feature for Spain at a World Cup and marked the occasion with a brilliant goal. He arrived on the edge of the area to volley home Alvaro Morata’s cross with the outside of the boot, becoming the youngest World Cup goalscorer since Pele, 64 years earlier.

The teenage talents flourished alongside Sergio Busquets, with the Spain captain serving as the bridge between the old and new. Part of that formidable trio alongside Xavi and Andres Iniesta, he is the perfect role model to tutor two players with sky-high potential.

Argentina and Germany down but not out

Football fans across the world revelled in the stunning upsets of the opening round, as heavyweights Argentina and Germany suffered shock defeats.

Argentina arrived in Qatar well fancied to leave as champions, following a 36-game unbeaten run that stretched back to 2019. One game in and La Albiceleste need a result against Mexico this weekend, after losing to Saudi Arabia in their opener.

1930 – @Argentina have lost a World Cup game after leading at half-time for the first time since 1930, in the final against Uruguay 🇺🇾. Historical.#ARG #ARGKSA #FIFAWorldCup pic.twitter.com/GH9bGZ7Dta

It was a sensational result, as the team ranked 51st in the world upset the odds to beat Lionel Scaloni’s side. Germany also found themselves on the wrong end of a surprise result, surrendering a first-half lead to lose to Japan.

With Spain to come next, Hansi Flick’s side have no room for error and run the risk of a second straight group stage elimination at a World Cup.

It’s been a far from ideal start for two teams backed to reach the latter stages, but each should take encouragement from slow starters in past tournaments. Spain were beaten in their first game before being crowned world champions in 2010, while West Germany (1974) and Argentina (1990) have each lost their opening fixture before reaching the final.

With all due respect, past versions of Brazil have had better options at number nine than the current crop.

Romario and Ronaldo are two of the greatest goalscorers the game has ever seen, while even Adriano’s brief flirtation with the top was a level above Tite’s options for Qatar.

It is Richarlison who has earned the nod for the World Cup, adorning the iconic nine shirt. The 25-year-old has featured predominantly from a wide role in English football, but has earned the trust of the national side at centre-forward. Against Serbia, as the pre-tournament favourites began with a 2-0 win, he delivered.

Richarlison scored both goals for the Selecao, opening his World Cup account with a poacher’s effort as he gleefully accepted the invitation to turn home a rebound. His second came moments later and in truly fantastic fashion.

The chance threatened to escape after a poor first touch, before Richarlison improvised to swivel and smash a spectacular overhead kick past Vanja Milinković-Savić.

The willing runner at the lead of Brazil’s attack-minded team, his desire to chase down lost causes and pressure defenders will be crucial in Qatar. A purple patch in front of goal – he has nine in his last seven appearances for Brazil – makes the Selecao even more dangerous.