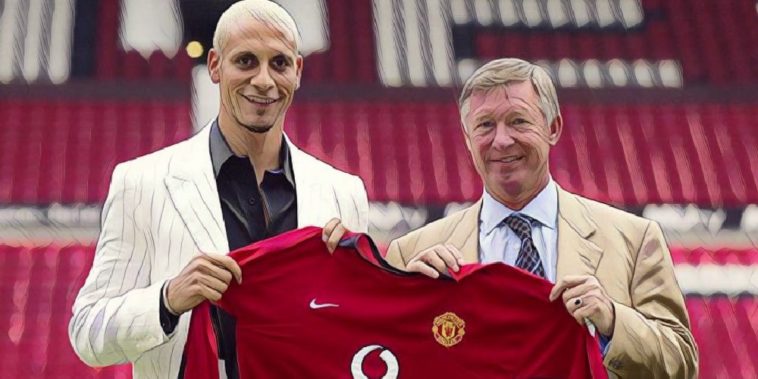 His renowned leadership and man-management style saw him create a long-lasting dynasty at Old Trafford, and whilst the club’s famed academy graduates supplied the core of his winning machine, the Scot would make several shrewd acquisitions to maintain the evolution of his side.

We’ve decided to profile some of the most high profile arrivals of his tenure, here are our ratings of the five most expensive signings of Sir Alex Ferguson’s Manchester United reign…

Having seen ‘noisy neighbours’ Manchester City snatch their first Premier League title in dramatic fashion on the final day of the previous season, Ferguson entered the transfer market and would make a signing that represented a huge statement of intent.

Arsenal captain Robin van Persie had just been crowned as the finest player in England’s top flight, winning the a PFA player of the Year and Football Writer’s Footballer of the Year double in addition to the Premier League’s Golden Boot following a prolific campaign in north London.

The Dutchman was about to enter the final year of his contract at the Emirates and had decided against an extension, Van Persie keen to secure silverware after seven trophy-less seasons with the Gunners and heading to Old Trafford in a £24m deal.

It would prove an inspired signing.

Van Persie would once again star as Ferguson’s side recaptured the title, winning a second consecutive Golden Boot and scoring 30 goals in all competitions, including a hat-trick against Aston Villa as a record-extending 20th top flight title was won in style.

Much to the forward’s disappointment, it would prove to be Ferguson’s final season in charge before retirement, with Van Persie spending two more seasons with the club before joining Fenerbahce, leaving with a record of 58 goals in 105 appearances.

Rooney would burst onto the scene as a precociously talented teenage starlet at Everton, establishing himself in the senior England team before starring at the European Championships in 2004 at just 18-years-old.

His impact would see him become one of the hottest properties in world football and it would be United who would win the race for his signature, making the forward the most expensive teenager in history later that summer.

A stunning debut hat-trick in the Champions League against Fenerbahce would a sign of things to come, Rooney going on to become one of the greatest players in the club’s history during a glittering 13-year career at Old Trafford.

His list of honours would include six Premier League titles and the Champions League whilst he would become one of only two English players to win both of those honours in addition to the FA Cup, League Cup, Europa League and Club World Cup; teammate Michael Carrick being the other.

Perhaps his finest individual season would come in 2009/10 as he won a PFA Player of the Year and FWA Footballer of the Year double, scoring 34 goals in all competitions.

That tally would come as part of a haul of 253 goals in 559 appearances, Rooney eclipsing Sir Bobby Charlton as the Red Devils’ all-time record goalscorer, also beating the landmark of the same player for most goals scored for England.

Despite seeing his side win three consecutive league titles at perhaps the height of their dominance between 1999 and 2001, Ferguson would seek a marquee addition to bolster a midfield already containing the likes of Roy Keane and Paul Scholes.

Argentine playmaker Juan Sebastien Veron would arrive in a British-transfer record deal from Italian side Lazio, the classy midfielder having inspired the capital club to a Serie A title triumph in 2000.

Veron would begin brightly, scoring three times in four appearances during September to be named as the division’s Player of the Month, but his performances soon dipped as he struggled to adapt to the pace and robustness of English football.

His better performances came in the slower tempo of Europe, though for all his talent he was unable to produce regularly in the Premier League and was regarded by many as a huge disappointment.

After two seasons Ferguson would cut his losses on an expensive mistake, selling Veron to rivals Chelsea, where he would again struggle making just 15 appearances before returning to Italy.

In need of defensive reinforcements having allowed Jaap Stam to leave for Lazio the previous summer, Ferguson would make Ferdinand the most expensive defender in history for the second time in the young centre-back’s career in 2002, breaking the British transfer record to sign the England international from Leeds.

Ferdinand had shone in that summer’s World Cup for England, and soon became a mainstay at the heart of the United defence. Athletic, strong and comfortable in possession, the defender developed into one of the world’s best and enjoyed a trophy-laden spell at Old Trafford.

In 12 seasons, Ferdinand won six league titles, two League Cups and the Champions League, being named in the PFA Team of the Year on five occasions and establishing himself as one of the greatest defenders in Premier League history.

He would spend just one further season at the club following Ferguson’s retirement, leaving for QPR in 2014 having scored eight goals in 455 appearances in all competitions.

The silky-skilled Berbatov would make an impression in the Premier League during a two-year spell at Tottenham, scoring 46 goals in 102 appearances for the north London side and producing several snippets of effortless brilliance.

His displays would soon attract the attention of Ferguson, United beating off competition from a Manchester City side fresh from their billionaire takeover to sign the forward in a £30.75m deal.

Berbatov would lift two Premier League titles during his spell in Manchester, including winning the division’s Golden Boot during their triumphant 2010/11 campaign, whilst cementing himself as a favourite with an iconic hat-trick against arch-rivals Liverpool at Old Trafford.

His languid style would not appeal to everyone, but there is no denying the swagger that the Bulgarian would bring during his four-season stay, leaving the club with a record of 56 goals in 149 appearances and a highlight reel of magical moments.

See also – Sir Alex Ferguson – 20 of his greatest ever quotes