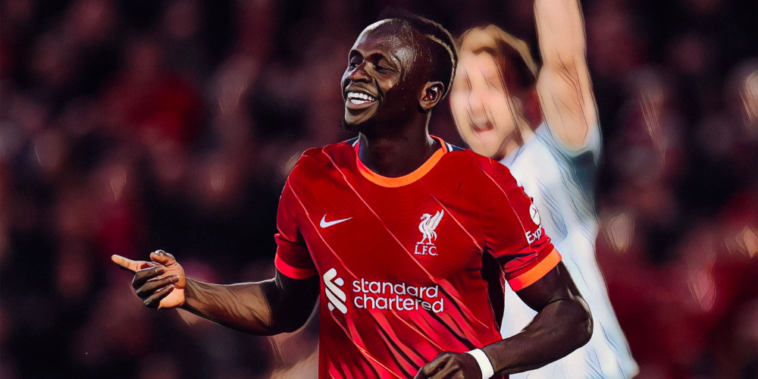 Africa has produced some brilliant footballers in the modern era with many of the continent’s finest having shone in the Premier League.

Sadio Mane’s exit from Liverpool has seen English football wave goodbye to one of Africa’s best exports, with the Senegal international departing for Bayern Munich after six seasons of success at Anfield.

He leaves having won every available major honour at Liverpool and as a crucial cog in turning Jurgen Klopp’s side into competitors for silverware.

Following Mane’s departure from the Premier League, we’ve attempted to rank the five best African footballers in the division’s history.

Riyad Mahrez became the first Algerian footballer to win the Premier League, having been the creative force behind Leicester’s stunning title success in 2015/16.

Signed from Le Havre for a modest fee, he developed into one of the league’s most effective wingers across four-and-a-half seasons with the Foxes.

Mahrez was the Premier League’s most influential footballer as Leicester caused the greatest shock English football has witnessed, scoring 17 league goals during their title-winning campaign to win the PFA Player of the Year Award.

He moved to Manchester City in a £60m deal in 2018 and has since won a further three Premier League winners’ medals at the Etihad.

His debut season ended with English football’s first domestic treble, whilst he has provided 109 goal involvements in 133 starts for City across all competitions.

Mahrez’s talents have perhaps been under-appreciated since his move to Manchester, but his dazzling footwork and productivity around goal have made him a full-back’s nightmare.

Mane first arrived in the Premier League with Southampton and spent two seasons on the South Coast before becoming Jurgen Klopp’s first major signing at Liverpool.

Since moving to Liverpool he has evolved into one of the best wide forwards in world football, winning the the Premier League, Champions League, FIFA Club World Cup, UEFA Super Cup, FA Cup and Carabao Cup.

Named in the PFA Team of the Year on four occasions, Mane’s record of 111 league goals makes him the second-highest scoring African footballer in Premier League history, behind former Liverpool teammate Mohamed Salah.

Jurgen Klopp has described Mane as one of Liverpool’s ‘greatest ever players‘ upon his exit, with the Senegal forward’s relentless running and explosive brand of football having been perfectly suited to the demands of Klopp’s side.

Yaya Toure’s latter period with Manchester City should not cloud how important he was to the club’s rise, with the Ivorian among the most dominant midfield players of the Premier League era.

Signed from Barcelona as one of the club’s first real marquee arrivals, he ended his debut season with a crucial role in City’s FA Cup success, scoring winners in the semi-final and final to end a 35-year wait for a major trophy.

The Premier League title arrived the following season, the first of three the four-time African Footballer of the Year won at the Etihad.

His role in the club’s 2013/14 triumph was monumental, producing one of the most iconic individual seasons in Premier League history to score 20 goals and provide nine assists from midfield.

Unstoppable at his best, his marauding runs forward were among the defining images of City’s early emergence as a Premier League force.

Mohamed Salah has set records tumbling since returning to the Premier League at Liverpool, with the Reds providing the Egyptian with a second chance after a difficult spell at Chelsea.

His first season at Liverpool saw Salah break the Premier League goals record for a single season, netting 32 times to win the Golden Boot, PFA Player of the Year and FWA Footballer of the Year awards.

The goals have continued to flow at a rapid rate for the 29-year-old, who has added a further two Golden Boots to his collection to become the highest scoring African in the division’s history.

Salah has reached 20+ league goals in four of his five campaigns with Liverpool, with his latest seeing the forward become just the fourth player to top the league for goals and assists in the same campaign.

Another PFA Player of the Year and FWA Footballer of the Year double followed and he will now have his sights set on matching Thierry Henry’s record of four Golden Boots next season.

The numbers are remarkable for a player who has operated in a wide role for the Reds, whilst his individual achievements have been matched with a host of team honours, winning every available major trophy since moving to Anfield.

Didier Drogba departed Chelsea regarded as one of the club’s all-time greats, having been a talismanic presence during the most successful era in the Blues’ history.

Arriving as a big-money signing from Marseille, he won 12 major honours and helped revolutionise Premier League trends with his ability to occupy backlines singlehandedly.

Drogba boasted raw pace and power with the technical gifts to match and became the first African footballer to score a century of Premier League goals.

The Ivorian twice won the Premier League’s Golden Boot and developed a reputation as the ultimate big-game player, scoring nine goals across 10 cup finals for Chelsea – including a crucial equaliser as the west Londoners won the Champions League in 2012.

He departed after that success but returned for a short second spell in 2014/15, winning a fourth Premier League title before calling time on his Chelsea career with 164 goals scored from 381 games.