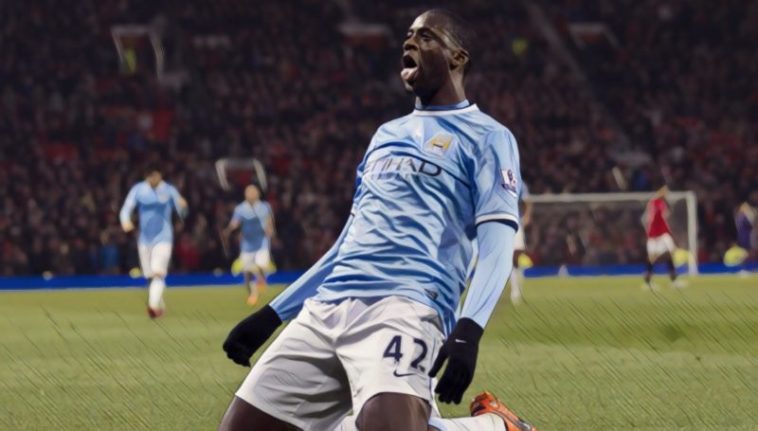 Manchester City’s emergence as an elite force in English football has seen a host of leading talents head to the Etihad over the course of the past decade, with the likes of Sergio Aguero and David Silva establishing themselves as all-time greats of the Premier League era.

One man, however, perhaps had an even greater influence over the early rise of Manchester City, Yaya Toure proving one of the most influential players in the club’s modern revolution.

The Ivorian will forever be remembered as the man who scored the FA Cup final winning goal to end City’s 35-year wait for a major trophy, but it is undoubtedly the 2013/14 campaign which saw the midfielder at his near unstoppable best.

We’ve decided to revisit one of the great individual campaigns of the Premier League era, remembering Yaya Toure’s monstrous performances during the 2013/14 season:

Toure had arrived at the Etihad having largely been deployed as a defensive player during a three year spell at Barcelona, even being used as a centre-back on occasion by Pep Guardiola including in the 2009 Champions League final victory over Manchester United.

The midfielder’s £24m arrival in English football saw Toure unshackled, however, initially by Roberto Mancini before Manuel Pellegrini’s appointment as manager ahead of the 2013/14 campaign.

City had recognised that in Toure they had a player capable of fulfilling a variety of midfield roles, a unique talent who had the pace, power and technique to influence proceedings at both ends of the field.

Toure had shone as a defensive anchor at the Camp Nou, but placed alongside the defensive-minded Fernadinho in a two-man midfield at the Etihad by Pellegrini, City began to extract the maximum from the star’s array of talents.

With the assurance of Fernandinho’s positional sense and defensive nous behind him, Toure began the season in fine goalscoring form by netting eight times in his first 14 appearances – bettering his tally from each of his previous full three seasons at the club by early December.

Toure’s increased output in terms of goalscoring was largely in part to his added responsibility from set-pieces, the midfielder becoming City’s designated taker for both penalties and free-kicks from dangerous areas.

His prowess from dead-ball situations saw him, quite incredibly, score ten times from such situations in just 13 attempts – his goalscoring tally boosted by the successful conversions of six penalties and four free-kicks.

His repertoire included pin-point efforts from distance against the likes of Hull, Norwich and Fulham, Toure seemingly adding another threat to his multi-faceted midfield talents.

The abiding memory of Toure’s campaign, however, was his surging runs forward. Rarely has a Premier League midfielder possessed both the speed and physical strength of the Ivorian, who seemed to move through the gears at sheer pace to leave top-flight defenders in his wake.

Toure’s trademark drives from deep opened space for both himself and his teammates, City’s two-pronged attack – selected largely between Sergio Aguero, Edin Dzeko and Alvaro Negredo – often joined at rapid pace by the marauding number 42.

No goal epitomised this side of Toure more than a breathtaking individual goal against Aston Villa during the penultimate game of the season, picking the ball up deep inside his own half before embarking on yet another charge forward.

City were three goals ahead at this point as the game ticked through additional time, but anticipating a chance Toure surged into the opposition half on the counter-attack, with a quintet of Villa defenders unable to stop the inevitable as the midfielder drove towards goal to finish with aplomb.

Toure finished the season with 20 Premier League goals to his name, finishing as the third-highest scorer in the division and becoming just the second midfielder – after Frank Lampard – to reach 20 goals in a single campaign.

No midfielder is yet to match the duo’s achievement since.

Aside from his goal threat, however, Toure was a creative force for Manuel Pellegrini’s side as they scored 102 goals throughout the campaign, the second-highest tally ever recorded at that time.

Toure registered nine assists and completed a huge 90% of his 2502 passes, in addition to creating 40 chances for his grateful teammates. His impact was such that City became the first side in Premier League history to have three individual players register 15 league goals, with both Sergio Aguero and Edin Dzeko joining Toure in reaching the landmark.

In addition to his dominant league performances, the midfielder also played a hugely influential role as Pellegrini won his first silverware in the form of the League Cup, scoring one of the competition’s greatest goals in the final victory over Sunderland at Wembley.

The league, however, was the club’s holy grail and despite the threat of a Luis Suarez-inspired Liverpool, City held off the Merseyside club to secure a second Premier League title in three seasons.

The club’s title success capped off a remarkable individual campaign for Toure, who was recognised for his achievements with an inclusion in the PFA Team of the Year and named as African Footballer of the Year for the third successive year, claiming the award for a fourth time in 2014.

Perhaps the greatest individual campaign produced by a midfielder in Premier League history, with even the likes of Steven Gerrard, Frank Lampard and Paul Scholes having failed to dominate a single season quite like the City star.

He may have been pipped to the individual accolades by the brilliance of the aforementioned Suarez, but Toure’s 2013/14 season remains one of the most exhilarating witnessed in the Premier League era.