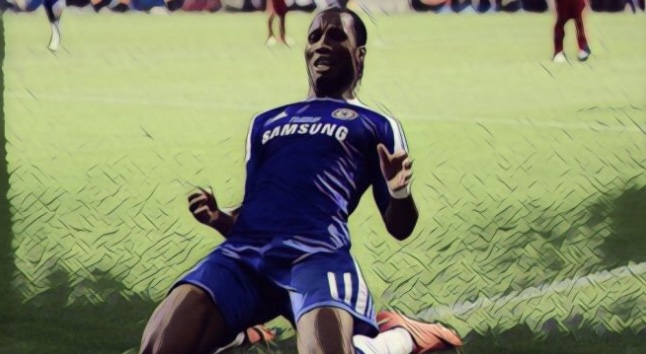 The history of Chelsea football club was forever changed following the takeover of Roman Abramovich almost two decades ago, the Russian’s decision to take ownership of the west London side catapulting the club into the elite of European football.

Abramovich’s billionaire backing saw a whole host of marquee names arrive at Stamford Bridge, but perhaps none of the club’s substantial investments have had an impact quite like Didier Drogba.

It’s not outlandish to say that the Ivorian was responsible for more history-making moments in Chelsea blue than any other player of the modern era, a powerhouse of a player who took on talismanic status and led by example from the front.

Few could have envisaged the impact the towering target-man would have following his arrival from Marseille, and we’ve decided to look back at the story of a formidable forward and one of the Premier League’s great Golazo Merchants.

The career of Drogba was one that never seemed destined for superstardom, in fact, it looked as if his dream of becoming a footballer may never materialise as injuries halted his progress, the striker not making his professional debut until after his 21st birthday.

A rather modest beginning with French side Le Mans saw him shipped on to Guingamp shortly after the turn of the millennium, where after a period of adaptation the forward burst into life.

He scored 21 goals in all competitions to fire the minnows to a record seventh-placed Ligue 1 finish in 2002/03, a season which began a meteoric rise for the Ivorian and saw bigger clubs circle. Marseille gambled on his talents for £3.3m – an investment that paid off in spectacular fashion.

Drogba’s single season stay at Marseille saw him become one of the most popular players in the club’s modern history, scoring 32 goals in all competitions to fire the club to the UEFA Cup final, tormenting Premier League opposition in Europe by playing an influential role in the eliminations of both Liverpool and Newcastle.

Drogba’s star had risen and risen quickly, and it would not be long before he received an approach from an ambitious Chelsea side and their charismatic new head coach.

We signed @didierdrogba on this day 1️⃣5️⃣ years ago! ?

And it all started here… ? pic.twitter.com/G13wSACiG7

Jose Mourinho had waltzed into Stamford Bridge after guiding Porto to a shock Champions League triumph, the self-proclaimed ‘Special One’ armed with an almost blank chequebook as he sought to establish Chelsea among the elite.

The Portuguese viewed a midfield three as his best route to success and the shift required a move away from the two-man strike partnerships common in English football. Mourinho needed a multi-functional forward capable of occupying a backline singlehandedly and in Drogba he had found his man.

Abramovich sanctioned a club-record deal for the forward who initially took time to adapt to the demands of English football, with the sight of the hulking Drogba writhing in agony amid minimal contact not too uncommon during those early days in a Chelsea shirt.

He did, however, form part of a Blues side who were relentless in their pursuit of success, winning a first league title in 50 years during Mourinho’s debut season before making it back-to-back championships the following year. Drogba scored a respectable 16 goals in all competitions during each title-winning campaign.

The following season saw the Ivorian really begin to star as Chelsea’s chief threat, winning the Premier League’s Golden Boot and hitting 33 goals in all competitions – including winners in both domestic cup finals – as his legend began to grow.

That season saw Drogba become virtually unplayable as his confidence flourished in the knowledge of his importance to the side, adding several stunning strikes to a collection of classic goals.

The mid-2000s saw Chelsea and Liverpool forge an iconic rivalry with the two sides meeting in many huge occasions, including two Champions League semi-final ties, and it was against the Merseyside club where we start our run through Drogba’s greatest goals, a piece of individualistic brilliance which encapsulates the very best of Chelsea’s talismanic number 11.

A lofted ball is crossed in the direction of the star who has Jamie Carragher in close company, only for Drogba to produce a moment of breathtaking hold-up play and skill. He cushioned the ball on his chest and in one movement swivelled to volley the bouncing ball – smashing his effort past Pepe Reina to seal three points in stunning style.

It was perhaps on the floodlit nights of Champions League occasions where Drogba truly thrived, however, and our next offering rewinds to the visit of reigning European champions Barcelona to Stamford Bridge in 2006.

The Catalan side boasted the likes of Ronaldinho, Lionel Messi and Xavi amongst their ranks, but it was the fans’ favourite leading the line for Chelsea who settled the contest with a moment of magic.

A fizzed pass seemed as if it may escape Drogba’s control on the edge of the penalty area, only for an ingenious flick to bamboozle Carles Puyol and allow space to shoot.

The strike was laced with venom and rocketed past Victor Valdes, Drogba the difference-maker once more on a memorable night in the capital.

Just weeks later and Drogba’s one-man crusade to win every Goal of the Season accolade continued at Goodison Park, scoring a late winner at Everton that was perfectly wrapped in both beauty and importance.

A topsy-turvy contest was finely poised at 2-2 after Chelsea had twice hit back to level, a Tim Howard own goal and Frank Lampard’s strike cancelling out Mikel Arteta’s penalty and Joseph Yobo’s goal for the home side.

There were just three minutes remaining when Drogba did what Drogba does, shouldering the responsibility to drag his side kicking and screaming across the finish line.

A long punt upfield was flicked on into the striker’s path by Andriy Shevchenko, with Drogba facing away from goal some 35-yards out. One trademark piece of chest control and spin later, the forward was presented with a bouncing ball and the distant whites of the goalposts.

Without hesitation the star thundered a stunning long-range volley that dipped to deceive Tim Howard, Drogba’s bolt from the blue adding another Golazo to his ever increasing collection.

Remember this one, @ChelseaFC fans?

Many a Premier League defence feared facing Chelsea’s talisman, but none more so than Arsenal.

In fact, the Gunners were sick of the sight of a player who regularly saved his best displays for the north London outfit, tormenting Chelsea’s cross-city rivals on countless occasions to emphasise the seismic shift of power in the capital.

Drogba scored ten goals in just 15 appearances against the Gunners during his two stints at Chelsea, but perhaps none finer than this set-piece special at the Emirates in 2009.

Amongst a selection of players to prefer the knuckleball technique, when Drogba executed it to perfection it had sensational consequences.

Manuel Almunia may have been better served standing and applauding rather than attempting his despairing dive, the Spanish shot-stopper given no chance by a wicked strike that put the seal on a 3-0 win for Carlo Ancelotti’s side.

Drogba ran to take his acclaim from the travelling support, the forward the proverbial schoolyard bully of Premier League defences and the Emirates his preferred playground.

Our final superb strike comes from a trip to Bolton Wanderers in 2011, a quintessential Drogba delight which provides power, precision and outright audacity.

Unopposed some considerable distance from goal, the Bolton backline may well have gift-wrapped their invitation after summoning the striker to shoot.

Even the most optimistic of Chelsea fans may not have anticipated the end result, however, Drogba detonating a heat-seeking missile – full of swerve and dip – past Jussi Jääskeläinen to open the scoring in style.

One of the greatest strikers the #PL has ever seen…@didierdrogba's classic strike against Bolton, from every angle 😍 pic.twitter.com/6YYvkrzflG

The quality and quantity of Drogba’s goals means he will always be an iconic name in the Premier League’s hallowed hall of all-time greats, an instrumental figure in Chelsea’s modern history and a player who relished the biggest of occasions.

There has perhaps been no player in the division’s existence quite so comfortable in a lone forward role, Drogba a one-man army prepared to battle with the Premier League’s most brutish backlines.

He scored 164 goals for the club in all competitions over two spells – the highest of any non-English player – and developed a reputation as the ultimate big-game player, scoring nine goals in 10 cup finals to help add trophy after trophy to the Stamford Bridge cabinet.

The word legend is often banded around too often in footballing circles but there are few players in Chelsea’s history more deserving of the accolade than Drogba, an often superhuman spearhead who struck fear into opponents and became one of the Premier League’s true Golazo merchants.