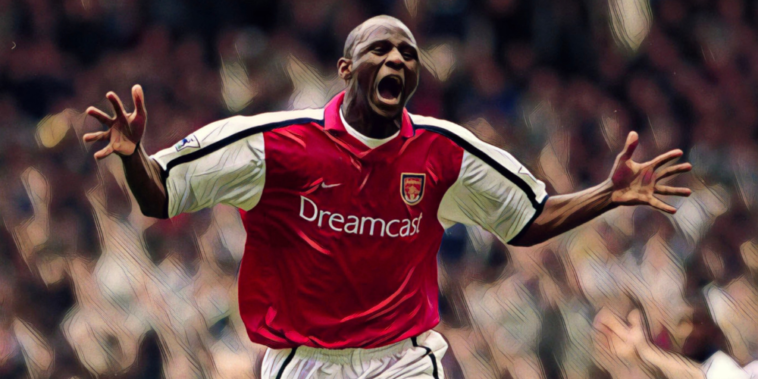 Arsenal’s teams across the turn of the millennium were among some of the finest in the club’s history, a side who on occasion produced football on a level never before seen in north London.

Arsene Wenger’s early genius was an ability to uncover and unearth footballing gems, players down on their luck, lacking opportunity, and in need of the right environment to fulfil their potential.

Polishing rough diamonds became a source of specialism for the Frenchman, with one of the jewels of his reign coming in the form of an untested gangly midfielder plucked from obscurity at AC Milan.

Vieira’s route to the San Siro had began in Senegal, before he moved to France aged eight as his family searched for greater opportunities.

Vieira’s raw talents as a footballer had initially been spotted as a teenager at Caens, but the subsequent move to Milan had failed to work out as hoped and after just two first-team appearances he departed the Rossoneri for London.

The demands of the Premier League were never likely to prove problematic for the imposing midfielder, but his immediate impact still caused surprise. Introduced before half-time with Arsenal trailing against Sheffield Wednesday, his domineering presence helped turn the tide on debut as the Gunners ran out 4-1 winners at Highbury.

Wenger’s arrival as manager began a transformation at Arsenal and Vieira was at the centre of that change, as the pragmatism of the George Graham and Bruce Rioch eras was replaced with more expansive football.

For an emerging team with ambitions of returning to English football’s summit, Vieira was the driving force. Influential and effective, his long-legged stride ate up Premier League pitches as he crashed into challenges and broke forward through opposition lines.

The arrival of compatriot Emmanuel Petit brought balance to the Arsenal midfield, with the Frenchmen working in superb synchronisation at Highbury. Their first full season in tandem ended with Premier League and FA Cup success, a combative conduit of Wenger’s side that propelled the Gunners towards a domestic double.

Each earned inclusion in the France squad for the 1998 World Cup on home soil, a tournament which ended with Les Bleus crowned as world champions. Vieira – on as a substitute in the final – laid on the third goal for Petit as Brazil were beaten 3-0 at the Stade de France.

Returning to England’s capital as a world champion, Vieira continued his rise as one of Europe’s best midfielders, though Arsenal failed to build on their triumphs of the previous season.

Indiscipline became an issue for the Gunners and Vieira was at the heart of their problems, his manic will-to-win often seeing the midfielder cross the line. In 1999 he was dismissed for a foul on Pualo Di Canio in a clash with West Ham, before spitting in the direction of Neil Ruddock to earn a six-match ban.

His problems continued after returning from France’s victorious Euro 2000 campaign, with successive red cards across the opening fixtures of the 2000/01 season. It was a season which ended without silverware as Arsenal finished as runners-up in league and cup.

Despite public unrest with their failure to challenge, Vieira remained and in 2001/02 enjoyed one of his finest campaigns with the club. The arrival of Sol Campbell from north London rivals Tottenham proved an inspired signing and Arsenal romped to a second domestic double in four seasons.

Vieira was at the heart of their success and the title was sealed with a win at Manchester United, a poignant moment in a rivalry that defined the Premier League across the turn of the millennium.

Vieira played a leading role in a soap-opera drama between English football’s finest, as clashes between the two sides became unmissable entertainment. Fantastic football was mixed with more than a little needle, whilst the two midfield generals of the respective sides – Vieira and Roy Keane – became iconic sparring partners.

“He is my favourite enemy,” Vieira later recalled to ITV4 about Keane. “I don’t know if that makes sense to you, but it made sense for me, because I loved every aspect of his game.”

Their rivalry was fuelled on ferocious competitiveness and among a wealth of sub-plots it was often – both literally and figuratively – the central narrative. There has not been a rivalry before or since which has matched the intense animosity of peak Arsenal-United, a compelling chapter in the Premier League’s history.

“I don’t think we’ll ever be bosom buddies buying each other a drink in the pub, but out of everybody I ever faced as a player, he drove me to become better,” Keane said of Vieira, as per PlanetFootball.

“Obviously Arsenal were the team that really challenged Manchester United and, for a short time, went past us. And as their leader Patrick was immense.

“Without doubt I’d put him alongside (Zinedine) Zidane, (Paul) Scholes, (Steven) Gerrard and (Frank) Lampard as one of the very best I’ve ever played with or against, he was that good.

“On his day, when he was driving Arsenal on with the sheer force of his personality, he was unplayable.”

Their brutal and brilliant battles saw tempers flare as the two teams traded punches in order to become the Premier League’s leading heavyweight.

The peak of Vieira at Arsenal saw him named in the PFA Team of the Season in six straight seasons, including during a 2003/04 campaign which etched Arsenal into footballing folklore. Having inherited the captain’s armband following Tony Adams’ retirement two seasons earlier, he captained Arsenal to invincible immortality with an unbeaten Premier League campaign.

It was a third league title for Vieira in north London, with his box-to-box influence powering forward one of the Premier League’s great teams. Their title-winning team was one that could do it all, capable of both fight and fluidity in equal measure.

Vieira’s marauding runs forward were a hallmark of the side, with the security provided by Gilberto Silva allowing him the freedom to charge onwards. Scything down opposition before threading passes forward, there was an aura that surrounded the Frenchman in Arsenal’s engine room, the undisputed leader of a team whose style was spellbinding on occasion.

Vieira spent just one further season with the Gunners, as Chelsea’s oil-rich regime altered the landscape of English football and saw a new superpower emerge across the capital. There was time for one final bust-up with Keane, an infamous face-off in the Highbury tunnel that added another layer to an iconic rivalry.

His final game ended with silverware and a fourth FA Cup winners’ medal, with the midfielder scoring the decisive spot-kick as old rivals Manchester United were beaten on penalties in Cardiff.

He signed for Juventus in the summer of 2005, bringing an end to nine glorious seasons in London. His return to Italy proved challenging however, as injury problems prevented Juventus from seeing the best of their new arrival.

Further problems followed at the end of the season as the Bianconeri were relegated to Serie B as a result of the Calciopoli scandal, with Vieira joining the fire-sale of talent as he headed to Inter Milan.

Four seasons brought four consecutive league titles as the Nerazzurri capitalised on a weakened Serie A, but an ageing Vieira proved only a shadow of the dynamic dictator that has stamped his authority on Premier League midfields.

He returned to England to sign for Manchester City as his career wound down, the move designed with one eye on his future as he was inducted into the club’s coaching set-up upon announcing his retirement from the game.

His exit called time on one of the great Premier League careers, with Vieira for so long the benchmark for which midfielders were compared.

Goals were not a regular feature in his game, but when arriving were often memorable or timely. He finished a wonderful flowing team move at Liverpool in which the technical talents of Thierry Henry, Robert Pires and Vieira all combined in a microcosm of Wenger’s Arsenal, whilst he scored a crucial opener as the title was won at White Hart Lane in 2004.

In truth, he has not been truly replaced in almost two decades since leaving north London but that in itself is perhaps a testament to his greatness. He was the marauding midfield monster of Arsenal’s great sides, a Gunners general who provided the bite behind their beauty.