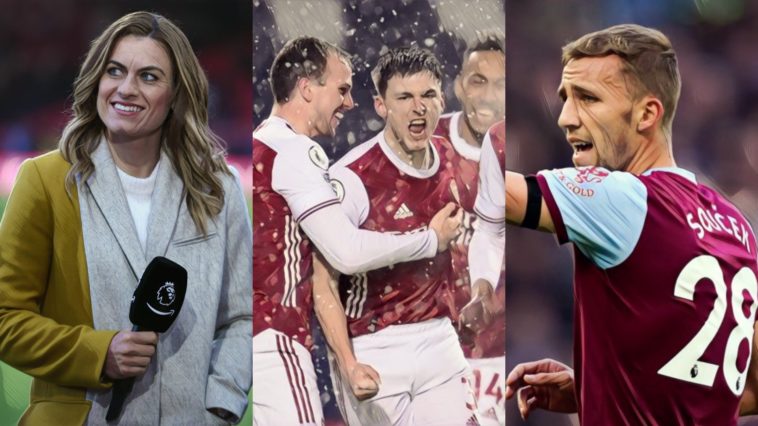 Our weekly Premier League awards take in the past seven days of football action, covering gameweeks 16 and 17, and feature Tomas Soucek yearning for Czech cuisine, Kieran Tierney’s leader-like performance, an unstoppable hit from Raphinha, and a complete cock-up from the Leeds United Twitter admin.

Someone get Tomas Soucek a potato salad right this instant! It’s a popular dish in his home country and West Ham United‘s Czech bulldozer deserves it for his recent performances.

"It was hard for me, normally I have three weeks off and eat a lot of potato salad in the Czech Republic!" 😂

The crazy Christmas schedule was new for Tomas Soucek but he adapted and came up huge for @WestHam!

If Arsenal are to go anywhere this season, then they must heed the example set for them by the passionate Kieran Tierney. The full-back, sporting short sleeves despite the cold, snowy conditions at the Hawthorns on Saturday night, was not only a bulwark, but showed magnificent quality too against West Brom.

The Scot’s effort can never be faulted – he was the hardest-working player on the pitch – yet it was his sterling attacking play that caught the eye most of all, getting a goal and assist in their second match of the week.

Tierney charged at the Baggies from wide left in the first-half, cutting inside the box before unleashing a terrific strike. Sam Johnstone had no chance.

Ohhh! Kieran Tierney! That is special! 😍

A terrific solo goal from the Arsenal man 👏

Tierney was a true leader in a backline that kept two clean sheets this past week, shutting out Brighton on Tuesday, giving the Gunners hope they can still salvage this campaign.

A stunning strike from Raphinha that also showed off the best of Leeds United. Sublime.

There were vestiges of the old David De Gea during an excellent performance against Aston Villa on Friday, the Manchester United goalie making four important stops in the match. His best came from an Ollie Watkins header going across his body that heading for the net, but he managed to tip it over the bar.

A team effort from front to back.

From this vital @D_DeGea save in the second half…

Bukayo Saka is the first player born after Sam Allardyce first managed in the Premier League to score against a Sam Allardyce team.

Required Reading: Five of the best football books of 2020

Dan Burn had an absolute mare on Saturday night against Wolves. The Brighton defender scored an incredibly unfortunate own goal though no real fault of his own, but he compounded the error by giving away a penalty just before half-time.

Burn is a big guy, almost 2m tall, but even he is no match for the physical marvel that is Adama Traore. When the Spanish international had him beaten at the byline, Burn made a very silly challenge indeed, taking down the oiled-up winger in the box.

Dan Burn is on the wrong end of a cruel slice of luck. Sanchez punches the ball straight at Burn who inadvertently bundles it over his own goal line.

Truly a night to forget for the Englishman, probably his worst ever Premier League performance. At least his team didn’t lose in the end.

Leeds United may have lost 3-0 to Spurs at the weekend, but they destroyed West Brom earlier in the week and in the grand scheme of things they would probably accept that set of results. but it was off the pitch that the club made themselves look a bit foolish.

Despite basking in the glow of a tremendous win over the Baggies, the club’s Twitter account felt it should bring attention to comments made by pundit Karen Carney during Amazon Prime’s coverage of the match. The former England international suggested that the Whites’ promotion last season was helped by the unexpected break due to the coronavirus.

There was nothing inherently wrong with Leeds highlighting that – indeed, it’s part of their online schtick – or Carney’s initial comments. But once it was brought to the attention of the club’s 668,000 followers, it led to an avalanche of gendered and misogynistic abuse towards Carney.

"That is NOT an example of a tolerant society."

"Sending people abuse on social media isn't victimless, it hurts people."@mrjakehumphrey with a message of support for Karen Carney ❤️

For their part, Leeds can’t help how their followers react to something they post, but it was predictable. On top of that, the response was less than helpful. Owner Andrea Radrizzani tweeted that Carney’s comments were “unnecessary and disrespectful”, while the tweet itself has not been deleted despite the overflow of bilious outrage it has inspired.

Radrizzani did apologise to Carney, saying “I’m very sorry Karen was abused on social media,” but his surprise at the reaction to it comes off as incredibly naive. “Our tweet wasn’t offensive – simply stating that we won the league by 10 points. We honestly didn’t expect such a reaction and we are sorry she experienced that.”

While this writer does not believe Leeds had bad intentions when they sent the tweets, it was irresponsible (to put it mildly) on their part. While they racked up plenty of retweets and interactions, a woman in football has had to suffer a tsunami of abuse and delete her Twitter account. Well done, Leeds.

Read: How Juninho overcame the ‘monstrous cold’ to become a 90’s Boro legend