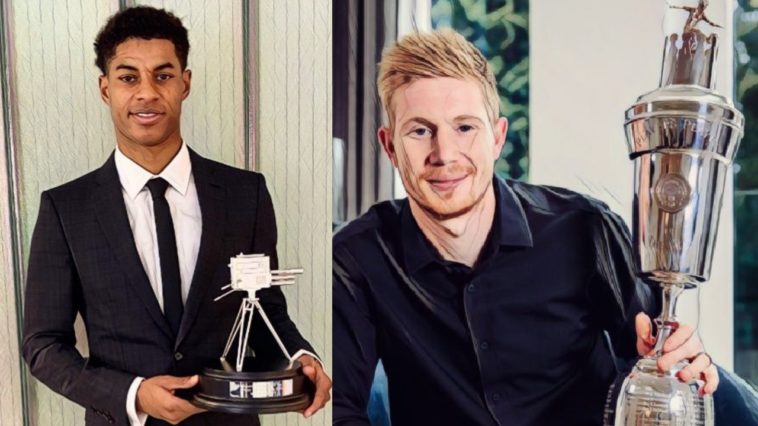 It’s been a long year, but it’s nearly over so it’s time to look back at some of the best that the Premier League had to offer in 2020 with our annual end of year awards.

Moment of the Year

In a year where issues of equality and justice took centre stage in sport, it only makes sense that Marcus Rashford wins Moment of the Year for forcing the UK Government to do a U-turn on their school meals policy back in June.

It might very well be the biggest political impact a footballer has ever made, certainly in the UK at least. And he wasn’t satisfied with stopping there; he set up a charity called Fareshare, which has already fed millions of children this year alone. He’s been awarded an MBE and the Expert Panel Award during the BBC Sports Personality of the Year ceremony.

For everyone who, over the last 12 months, has stepped in to support our most vulnerable children, thank you. This one is for you ♥️ #spoty pic.twitter.com/HRizTxBBWv

Best of 2020: Seven incredible non-football moments from the Premier League this year

What more is there to say about Kevin De Bruyne that hasn’t already been said? The Belgian midfielder took his game to a new level in 2020 with his non-stop ball progression and superhuman passing ability. The Manchester City star didn’t win a third consecutive Premier League title last season, but he did equal Thierry Henry’s assist record by setting up 20 goals (although he will argue it should have been more).

Kevin De Bruyne's stunner against Norwich wins Goal of the Month for July!pic.twitter.com/Senu2DEYIb

Goal of the Year

There is just so much to love about Manuel Lanzini‘s goal against Spurs in October. For one, the game should have been out of sight by half-time, as Tottenham took a 3-0 lead after just 15 minutes. On top of that, the goal earned the West Ham United a draw in the last minute of the game. And finally, it’s a cracking finish that went in off the bar. Sublime.

Manager of the Year

Okay, yes Jürgen Klopp is the best manager in the league right now, that much we can’t argue. But we gave this award to the German last year and he just won The Best FIFA Men’s Coach, which Hansi Flick deserved. So that’s why we’re handing it to a man who has attracted comparisons with the Liverpool manager: Ralph Hasenhüttl.

The Austrian has done a phenomenal job with a Southampton team that was on its knees when he first arrived. Although he struggled to implement his gameplan at first, the pressing strategy has reaped rewards. In 2020 the Saints have defeated Manchester City, Spurs, and Leicester, and in 2021 they could very well find themselves competing in Europe.

Transfer of the Year

Is this the best £47m Manchester United have ever spent? Since arriving last January Bruno Fernandes has had a transformative effect on the team’s fortunes, dragging them into the top four with his panache and supreme creativity.

The Portuguese playmaker has been arguably the best player in the Premier League since making his debut in February. In 43 appearances in all competitions fo the club he has provided 40 goal involvements, a sensational return.

Read: Turkish Delight: Five of the best Turks to play in the Premier League