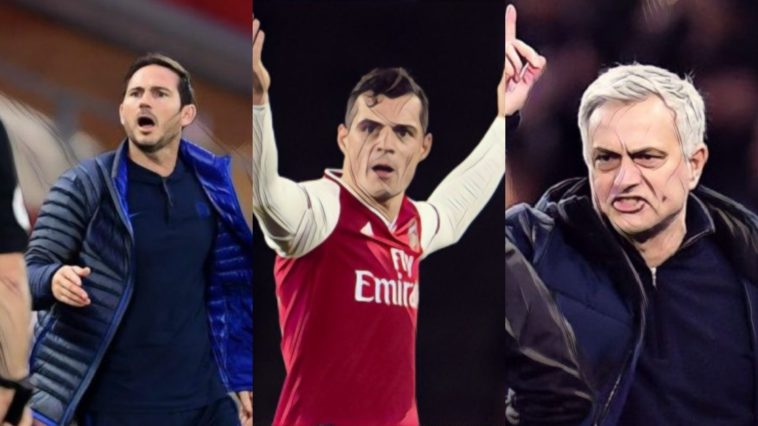 This season has not only been the longest in the history of English football, but it might also be the maddest.

Having the entire European football calendar interrupted by a pandemic was not something anyone had considered at the beginning of the season, making it immediately the strangest occurrence in a sporting sense in living memory. Not since the Second World War had football been forced to stop due to forces outside of its control.

Thankfully football was able to continue again, albeit without fans in the grounds, another altogether strange thing we’ve had to get used to in recent months. But that’s just one of a series of mad moments we’ve seen this season, all of which sprinkled some added drama into the Premier League this past year.

Xhaka tells off his own fans

It’s not often you see a club’s own supporters boo their captain. Equally, it’s rare to find a captain telling their fans to “f*ck off”. But that’s what happened last October while Granit Xhaka was being substituted off the pitch against Crystal Palace at the Emirates Stadium.

The remarkable scene was a microcosm of Arsenal’s deep rooted issues both on the pitch and behind the scenes. Manager Unai Emery was sacked just a month later following a shocking start to the campaign which effectively killed their top four aspirations, while the club’s muddled recruitment strategy and deteriorating finances have entwined to create a deeply imbalanced squad.

This moment appeared to be a nadir at least and not a spectre of worse things to come. The Gunners installed former midfielder Mikel Arteta as head coach, performances improved over the course of the season, and they ended the season with a trophy. Xhaka even recovered his reputation, becoming an important part of Arteta’s side as they managed FA Cup glory.

Our annual Premier League end of season awards for 2019/20

Pep Guardiola really doesn’t like losing. And to be fair to him, who amongst us does? We all love winning and hate losing. But when the Manchester City manager loses a football match, he really cannot hide his displeasure.

The Catalan’s bid to win a third consecutive Premier League title was looking rocky by the time his team faced Liverpool at Anfield in November, but it was truly crushed when the final whistle was blown. The hosts won 3-1 during a dominant display, but it was Guardiola’s actions on the sideline that caught all of the attention.

City were denied two penalty claims during the match, which prompted him to turn to the fourth official and scream “twice” at the top of his lungs several times before shouting into the heavens.

It didn’t end there, though. After the match when the perfunctory handshakes were taking place, Guardiola approached the officials and thanked them profusely for the job they had done. Entirely sincerely, of course.

Pep Guardiola sarcastically thanks the referee at full-time ? pic.twitter.com/l6vr29HaW9

Comebacks, shocks and the best FA Cup finals of all-time

Jose Mourinho has gotten on everybody’s nerves at one point or another, but he can also be highly entertaining, whether he means to be or not.

The Portuguese tactician got one over his old foe Guardiola when his Tottenham Hotspur side defeated Man City 2-0 at home. So he was in a good mood was Jose. Laughing, joking, smiling – just loving life really.

Then his assistant informed him Raheem Sterling was on a yellow card and in danger of being sent off following a bad challenge. One second he’s jovially laughing away, the next he’s sprinting like Batman on the way to the Joker’s lair to complain vociferously to the fourth official just a few short yards away.

So much to love about the entire scene, particularly the deliberate manner in which he closes his bottle and the official slowly backing away almost immediately like a sober man trying to avoid a pub fight, which will surely feature heavily in this season’s episode of Premier League Years.

Drama, heartache and loadsamoney – why the Play-Offs might be the best thing in football

The first Premier League match back after lockdown was weird enough without any fans present in the stadium, but Sheffield United‘s trip to Villa Park featured one of the weirdest football moments in recent memory.

Since being brought in several years ago, goal line technology has worked seamlessly, removing any doubt over whether or not the ball crosses the line. Unfortunately for the Blades, they became the first side on the receiving end of a mistake from the Goal Decision System.

As seen below, the ball clearly crosses the line following Aston Villa goalkeeper Orjan Nyland’s stumble after catching an Ollie Norwood cross and carries it into his own net. Apparently the Hawk-Eye cameras were “significantly occluded” by the ‘keeper and surrounding defenders. I’m sure Chris Wilder was consoled by that explanation after it cost his team victory.

It a very real effect on the table too, as Villa finished one point outside the drop zone, just ahead of Bournemouth. The Birmingham outfit would not have stayed up had the goal been called, but then again they were also controversially denied a goal against Crystal Palace which would have earned them a point.

One benefit of football with spectators is that you get to hear the players and managers talking and shouting. It doesn’t actually reveal very much, but the exception came when Liverpool hosted Chelsea in July.

The sideline cameras caught Lampard in a confrontation with Jurgen Klopp which will surely go down as one of the all-time great manager meltdowns. That didn’t provide a whole lot of context, but thankfully someone in the stadium filmed the incident from the stand:

Lampard is obviously not happy with the free-kick that was just given (and subsequently scored by Alexander-Arnold), and is unhappy with Pep Lijnders for not sitting down. Klopp informs his counterpart that his assistant is in fact sitting down.

Lampard says to Lijnders “it’s not a f*cking foul, I’m not asking you”, before telling Klopp “you can f*ck off as well.” The highlight comes when the Blues boss says “you have your party later on, giving it the f*cking big ‘un, f*ck off.”

Frank Lampard was involved in a heated row with the Liverpool bench on Wednesday – and then saw Trent Alexander-Arnold smash one in to the top corner ?pic.twitter.com/HPjBLLKWbH

Afterwards, the Blues boss tried to explain the confrontation by referring to the behaviour of the Liverpool bench, warning them not to “get too arrogant with” winning the league. Just an altogether incredible moment that we would never have otherwise seen so intimately.

See Also: Our EFL Championship team of the season for 2019/20