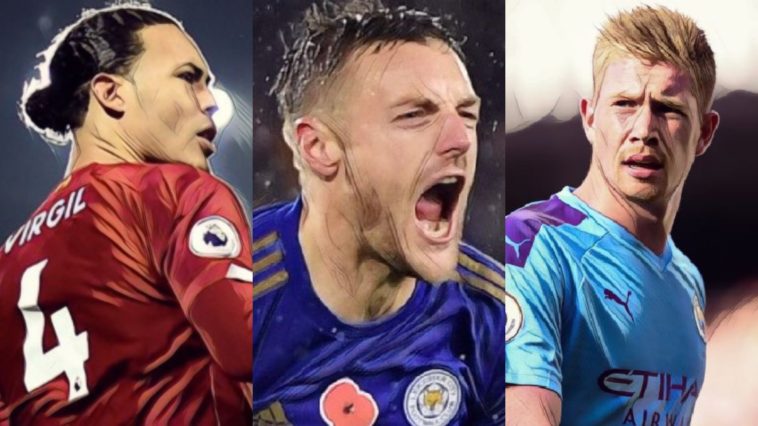 Following the FA Cup final this past Saturday, the domestic season has finally concluded for the English top tier.

There has never been a longer season than the 2019/20 campaign, but it is one that will live long in the memory thanks to Liverpool’s historic Premier League title win, all of the many records that were broken by teams and players this season, and of course the sideline shenanigans that entertained us along the way.

So now it is time for us to recognise the best footballers in each position from the past 11 months, something I’m sure we can all agree on and have no arguments about whatsoever. As was the case last season, we are only considering players who have featured in 75% of the available minutes this season, i.e. 2,565. Send any complaints or claims of fraudulence to our Twitter account.

Alisson Becker played 74% of the available minutes this season, so we probably would have given him a pass, but we’ve plumped for Dean Henderson anyway, who made a stirring case to be both England and Man United number one in the near future.

The Sheffield United shot stopper was tremendous for the Blades this season, his superb goalkeeping being one of the reasons they had their best ever top flight finish. His save percentage of 75% is bettered only by two players, Hugo Lloris and Bernd Leno, both of whom missed large chunks of the season.

Henderson let in just 33 goals in 36 games in 2019/20, giving him a goal conceded per 90 rate of 0.92. Again, only two players bettered that – Alisson and Ederson, arguably the best ‘keepers in the world right now behind Jan Oblak.

Next up, as voted by the fans…

On the bench: Alisson Becker, Liverpool

Our end-of-season Premier League awards for 2019/20

There are a lot of excellent right-backs in the Premier League who might get in this team in any other year – Matt Doherty, Ricardo Pereira, Aaron Wan-Bissaka to name just three – but for the time being they are all being shown up by a 21-year-old.

Trent Alexander-Arnold has been an absolute monster at right-back this season, following on from his ridiculous form of previous years. Among defenders he tops the league for big chances created (18) and attempted assists (86), which he turned into 13 assists, a record for a defensive player.

Suggestions that he is revolutionising the position are a bit much; he isn’t the first to play as a regista at full-back, rather he is reflecting a trend of full-backs being given more responsibility in recent years, but he is undoubtedly the best at it in the world right now.

"I hope that this is the moment where we see real change and we see permanent change."

On the bench: Matt Doherty, Wolves

Has there ever been a transfer that so effectively turned a team from also-rans into instant title challengers and ultimately winners more than Virgil van Dijk to Liverpool? Eric Cantona’s move to Man United in the early nineties obviously takes the biscuit, but if that is number one then the Dutchman’s transfer is a worthy runner-up.

Although he’s made a few mistakes lately, Van Dijk has been a rock for Liverpool over the past two and a half seasons and the ultimate catalyst for their Premier League and European success. The Reds kept 15 clean sheets this season, Van Dijk played every minute, and he also completed more passes than every other player in the league.

It’s not just the stuff he does on the ball or his defensive actions that makes him so great, it’s his spatial awareness and the way he shepherds attackers into harmless positions. These things cannot be totted up as numbers on a spreadsheet, but it’s what separates him from the rest.

This was a tough one, but Harry Maguire just about shades it for the second centre-back position. For so long Jonny Evans was a dead cert, but the combination of Leicester’s drastic dip in form over the second half of the season and Evans’ own final day capitulation against Manchester United saw him fall out of our XI.

Beyond Virgil van Dijk, the candidates for centre-back were quite a bit off his level. Joe Gomez was certainly in contention, but put him on any other team and is he still in the conversation for inclusion? Maybe, but it seems unlikely. Burnley’s James Tarkowski and John Egan of Sheffield United also had very good seasons, but it’s hard to construct an argument that they were head and shoulders above the rest.

And so that leaves us with Maguire, which sounds like a backhanded compliment, but he did have a good first season in Manchester. We are all aware of the weaknesses in his game, particularly his lack of pace and not being able to turn quicker than an oil tanker, but there is no doubt that alongside the signing of Wan Bissaka, he has improved the United defence immeasurably from the shitshow it was last year.

Maguire saw every minute of action this season, helped keep 13 clean sheets, and completed the sixth-most passes (2128) of any player in the league while featuring in the third best defence in the league based on goals conceded (36). He still has a long way to go to justify that price tag, though.

If Alexander-Arnold is the number one attacking full-back in the Premier League, then Andy Robertson is right behind him at number two. The Scot enjoyed his best ever season with 12 assists and two goals, while he was also second among defenders for big chances created (14) and third for attempted assists (60).

On the bench: Lucas Digne, Everton

There might be no better midfielder in the entire world than Kevin De Bruyne right now, who now holds the assists record in two of Europe’s top five leagues after equalling Thierry Henry’s long standing record of 20 in a single season.

The Belgian topped the league for attempted assists with 135, which was 44 more than the nearest player, while he also leads the way in big chances created (33), successful passes in the final third (710), and goals from outside of the box (5). But, he puts in the hard yards too, as seen in the 92nd minute against Watford when he ran 40 yards to win the ball back from Danny Welbeck – when Manchester City were 5-0 up.

The glaring omission from this team is, of course, Bruno Fernandes, but the sample size is simply too small. Would the Portuguese have kept the same pace of goals and assists over the course of an entire season? Perhaps, but given how he lagged in the final three matches of the league and the FA Cup semi-final, it’s hard to envisage him doing so. Still, he’s one of the most exciting midfielders in the league, so don’t be surprised to see him here next year.

Why KDB should be this season’s Player of the Year

Given how anonymous he was for the majority of the restart, it would have been very easy to leave Jack Grealish out of this side. But the English midfielder still had a brilliant season overall.

A player who is often found out on the left-wing, but is effectively Aston Villa’s number ten and has also played as a free eight, Grealish finished the season second for attempted assists with 91, second only to Kevin De Bruyne (135). He was Villa’s primary goal contributor, leading the club in both goals (8) and assists (6).

Grealish’s marvellous creativity is all the more impressive considering he was playing in a wretched relegation-battled team that was one goal away from the drop. It was he got that all-important goal though, scoring on the final day against West Ham United to keep them up at the first attempt.

All the #MondayMotivation you'll need.

The five favourites to sign Jack Grealish in the transfer window

Mo Salah was just one goal or assist away from a third consecutive season of providing 30 or more goal contributions, only to be thwarted by a run of poor finishing late in the season from adding to his 19 goals and ten assists in the league.

But the fact remains, Salah is probably still the best player in the English top-flight and most certainly the best winger. While Sadio Mané has been rightly lauded and heavily considered for the PFA Player of the Year award, the Egyptian is still Liverpool’s most important player.

On the bench: Heung-min Son, Spurs

While Raheem Sterling can count himself unfortunate not to be included here, Sadio Mané had possibly his best season ever, contributing 18 goals and seven assists to Liverpool’s title-winning campaign. The Senegalese winger has been an almighty thorn in the side of defenders this season with his agility, guile and superb finishing ability.

The toughest positions to pick were undoubtedly the forward line, where we had to leave out some big hitters who absolutely deserve recognition but were just edged out by players with better seasons. It pains me to omit Pierre-Emerick Aubameyang, who equalled his tally of 22 goals from last season, but it was impossible not to include this season’s Golden Boot winner.

Jamie Vardy scored 23 league goals in 2019/20, the most he’s scored in a campaign since the title win four years ago, and although several of them were penalties, it was his phenomenal streak of goal scoring in the first half of the season that powered them toward European qualification.

The Champions League fell out of Leicester’s reach in the end, while Vardy suffered a long drought without scoring after the new year, but that coincided with the poor form of James Maddison; the English midfielder provided zero assists and created just three big chances in the second half of the season.

Enjoy all 23 of @Vardy7's Premier League goals this season 🍿 pic.twitter.com/LnMtvxNkW3

The restart also saw the Foxes shorn of all their creative outlets – James Maddison, Ricardo Pereira and Ben Chilwell – through injury, but that only served to bring out another side of Vardy, that of provider. The striker made 0.65 attempted assists per 90 minutes in 26 matches pre-lockdown, but this shot up to 1.78 after the restart.

And he did while still being the team’s main goal threat, scoring four goals in the final six games.

On the bench: Pierre-Emerick Aubameyang, Arsenal

The five oldest winners of the Premier League golden boot

Quite possibly the surprise of the season, everyone thought Liverpool had done very well to get £20m for an injury-prone striker who was past his prime. And yet Danny Ings went on to have a stormer of a season.

The Englishman finished one goal behind Vardy in the race for the Golden Boot with 22 goals, but he ended up with the most non-penalty goals (21) of any player in Europe’s top five leagues. That is a seriously impressive statistic and one we never thought possible given his knee problems over the years.

From 1-10 how would you rate Danny Ings' season and why is it 10? pic.twitter.com/YlUngviu5K

Read: The Belfast boy who played keepie uppies on the White House lawn