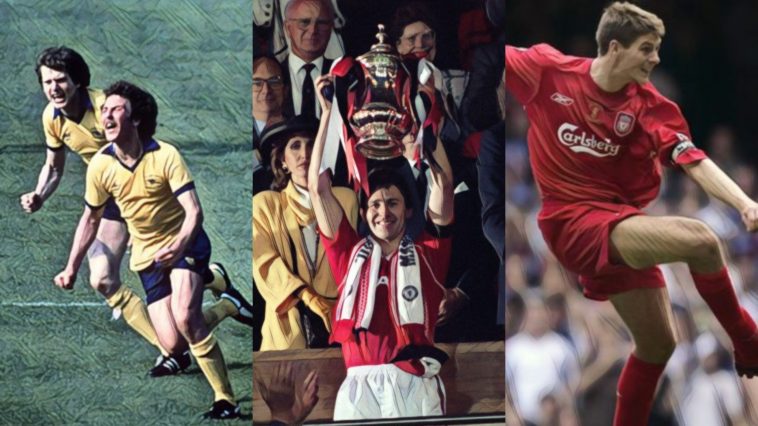 Ahead the FA Cup final between Chelsea and Liverpool at Wembley this Saturday, let’s take a look back at some of the most memorable deciders in the competition’s history.

Imagine scoring a hat-trick in a cup final and not getting the plaudits. Worse still, the match in question is subsequently named after one of your teammates.

We can’t imagine Stan Mortensen was too upset though, as he still picked up a winners’ medal and played a prominent role in one of the all-time classic FA Cup finals. It’s just that Stanley Matthews was simply so good that day his performance could not be ignored.

Twice a runner-up earlier in his career, Matthews was 38-years-old going into the final. It was looking like third time unlucky for the veteran, as the Tangerines were 3-1 down after 55 minutes. It was time for Matthews to turn it on, and he did, making some galloping runs down the right which the Trotters couldn’t handle.

Two more goals from Mortensen and a Bill Perry injury-time clincher later and Blackpool had completed one of the most sensational comebacks ever. Naturally it was Matthews who set up the winning goal, and the match became forever known as the ‘Matthews Final’.

Bolton eventually got their glory later that decade, beating Man United in the final in 1958.

A largely unexceptional contest for the majority of the match, Arsenal led by two goals from Brian Talbot and Frank Stapleton up until the 85th minute. From that point onward it famously became known as the Five Minute Final.

Gordon McQueen got one back for Man United, before Sammy McIlroy scored a sensational equaliser just moments later. The crowd went wild as the dramatic events unfolded in front of them, as a seemingly lost final was now back on even terms.

#OnThisDay in 1979, @Arsenal beat @ManUtd in what will be forever known as the "Five-minute Final" ⏱

It was the very briefest of joys, however, as Arsenal went down the other end to reclaim the lead through Alan Sunderland. Rarely has a football match seen the emotional tide turn so transiently in such a short space of time.

If you want to know where the ‘Spursy’ moniker comes from – a talented team that lacks the bottle to get the job done – then you could trace its origins all the way back to the 1986/87 season.

Tottenham Hotspur were embarking on one of their greatest ever campaigns, fighting for silverware on three fronts. They could have become the first English club to win the domestic treble, with Clive Allen’s incredible 49-goal haul pushing them towards glory, but they faded down the stretch.

They finished a distant third in the league and were knocked out of the League Cup at the semi-final stage. To compound their misery, it was Arsenal who dumped them out in a replay.

There was one last chance for success, though, in the form of the FA Cup, the final of which would see them face Coventry City. Having finished tenth in the table that season, Spurs were the firm favourites going into the match and had the perfect start thanks to an Allen goal in the second minute.

But the game went back and forth before the Sky Blues made it 2-2 through Keith Houchen’s diving header, one of the greatest FA Cup goals ever.

Five minutes into extra-time, Gary Mabbut’s unfortunate deflection gave the underdog’s the lead for the first time in the match. Allen’s 50th goal never came and Coventry won their first ever major trophy.

Spurs could have been one the all-time great English sides that year. Instead they became a footnote in one of the most famous cup shocks.

It was the trophy that saved Alex Ferguson’s neck as Manchester United boss. Or at least that’s how the narrative goes; without winning the FA Cup in 1990, the Scot would have supposedly found himself out of a job, such was the ill will towards him from a certain section of fans due to the club’s lack of success, which manifested itself in the famous “TA RA FERGIE” banner.

Ferguson was probably feeling the pressure early on in the decider when, in the 18th minute, Gary O’Reilly gave Crystal Palace the lead. The South London outfit had already caused a huge shock that year by knocking league champions Liverpool out of the semi-finals; the upset was on.

United were never going to give up that easily, however, as Bryan Robson headed home to equalise ten minutes from the interval before Mark Hughes gave the team in white the lead in the second-half.

With their cup dreams slipping away, manager Steve Coppell, a former Man United player himself, sent on Ian Wright with twenty minutes to go. The striker had played just four times in the previous 22 matches due to injury, but he still possessed the class to turn the game on its head one more time.

Within three minutes of coming on he turned the United defenders inside out to equalise and send the match into extra-time. Two minutes after the restart he slid in at the back post to sensationally give Palace the lead for a second time.

In a match where neither side deserved to lose, Wright’s exploits were ultimate in vain as Hughes scored a second time to send the match to a replay. The return fixture was a more sedate affair, as United professionally closed out the game as 1-0 winners.

Taking on the previous year’s European champions, West Ham United were going to need a minor miracle to defeat Liverpool in the decider at the Millennium Stadium in 2006. And for a while it seemed as if the gods were smiling on them.

Two howlers from Jamie Carragher and goalkeeper Pepe Reina saw the Hammers race into a two-goal lead, stunning the Merseyside outfit. The favourites summoned the fresh memories of Istanbul from the previous summer, however, and brought the game level through Djibril Cisse and a pinger of a half-volley from Steven Gerrard.

All of the good luck was seemingly on the Londoners’ side, though, as a long, looping Paul Konchesky cross somehow ended up in the Liverpool goal. With time ticking down and legs cramping up, the cup upset was on – that is, it was until Gerrard popped up with another one of his patented clutch moments.

The thunderous long-range strike was unstoppable, flying past the helpless Shaka Hislop to send this magnificent tie to extra-time. Despite having Teddy Sheringham and Bobby Zamora in the team, West Ham just didn’t possess the same kind of firepower in the shootout, with the Reds eventually winning on penalties thanks to a hat-trick of saves from Reina.