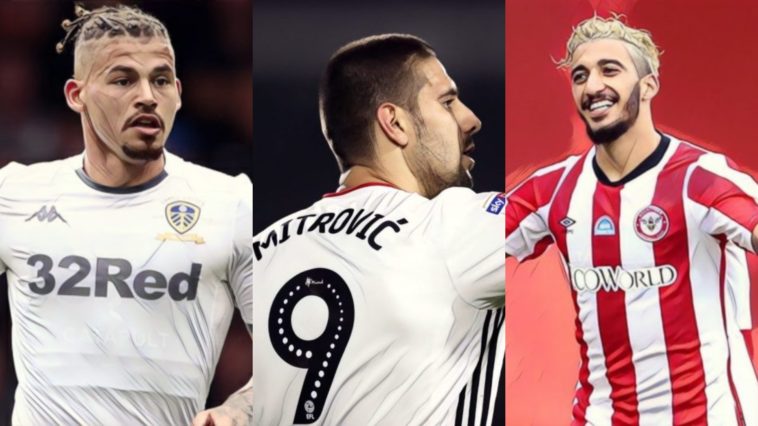 Ahead of Tuesday night’s playoff final, we pick our EFL Championship team of the year for the 2019/20 season.

The last game of the longest ever English domestic season, Brentford and Fulham will duke it out at Wembley to see who will join Leeds United and West Bromwich Albion in the Premier League next season.

Players from all four of those teams feature heavily in our Championship XI, but who makes the final cut? The 4-1-3-2 lineup we’ve gone for is attack heavy and lacks balance, but it’s more fun this way.

It wasn’t a standout year for goalkeepers in the Championship, although that shouldn’t take anything away from Marek Rodak taking the number one spot in this team.

The Slovakian shot stopper began the season as Fulham’s number two behind Marcus Bettinelli, but after a few poor performances by the Englishman he was given a chance by Scott Parker. Ever since the EFL Cup match against Southampton in which he made six saves, he has nailed down the position for himself.

Rodak has saved just over 76% of the shots on target against him, which is the highest in the league since he came into the Fulham team. Time and again he proved a significant last line of defence, stopping numerous shots that would have otherwise been conceded by lesser ‘keepers.

His 14 clean sheets are the fifth most of any goalkeeper in the second tier, a statistic made all the more impressive when you consider he has only played 33 matches. Among goalies who have played at least half of the available minutes this season, his rate of 0.424 clean sheets per game is the top of the league.

Why the EFL Play-offs are the best thing in football

Like many of his teammates, Luke Ayling has taken his game to another level under Marcelo Bielsa. The Londoner is primarily a right-back, but he can also excel at centre-back or in a holding midfield role, demonstrating his versatility.

The one-time Arsenal prospect contributed four goals and four assists to Leeds’ title triumph this season, while also leading the line in the stingiest defence in the second tier. It will be interesting to see how well he does in the Premier League next season.

? After nearly 28,000 voted and with a 75% majority, @lukeayling_8’s stunner against Huddersfield is @QuestTV’s #EFL Goal of the Season So Far! pic.twitter.com/HCkg0ipJVq

This was the year that Ben White proved he was Premier League quality. The Brighton loanee played 100% of the available minutes for Leeds this season, becoming an integral part of Bielsa’s backline through his ability on the ball. He even scored in the side’s 4-0 victory over Charlton Athletic on the final day.

He made a strong case for being the best defender in the league, but it’s not clear where he’ll be next season just yet. The Yorkshire club clearly want him back, but the Seagulls, who already have an abundance of centre-backs, will consider the player’s future carefully before making a decision.

A defender with a knack for scoring goals, Semi Ajayi found the net five times during West Brom’s promotion push, which saw them finish second and return to the Premier League after two years away.

The centre-back was a shrewd signing by the Baggies last summer after the player had shined for relegated Rotherham United, and ended up leading the line for the third best defence in the Championship.

A left-field choice for left-back, but Ryan Manning has been sensational for QPR, particularly towards the end of the season. The Irishman’s seven assists were the best in the division for a defender alongside Fulham’s Joe Bryan, while his four goals put him clear at the top for goal involvements for a defensive player.

Joe Bryan, Stuart Dallas, and Rico Henry can all feel hard done by with their exclusion, but Manning’s chance creation down the left flank was exceptional, particularly when you consider the team he was playing for was not one of the heavyweights of the league.

Another one of Bielsa’s disciples, Kalvin Phillips has been immense for United these past two seasons. He’s not just been the best midfielder in the league over that time, but arguably deserved an England call-up for his performances.

Ben Watson and Romaine Sawyers were also excellent this season, but Phillips has been, in many ways, the heartbeat of the best team in the division for two consecutive campaigns. He also contributed two goals and two assists in 37 appearances.

A potentially controversial pick, as Jarrod Bowen left Hull City midway through the season to join West Ham United. I usually discount players from the Team of the Year who have missed a sizeable chunk of the campaign, but I have plumped for the right-winger for a couple of reasons:

Before Bowen left for the Premier League in January, the Tigers were hovering just outside the playoff places with relegation the furthest thing from their minds. The club sold other players in the same transfer window, but none were as influential as him.

According to Transfermarkt, his 22 goal involvements are responsible for 22 points, almost half of the club’s final points tally. Had Bowen been kept at the KC Stadium a bit longer, he not only would have helped keep them up, but have a strong case for Player of the Year too.

Hull received a decent price for Bowen, but it might end up costing them so much more in the long run.

After arriving on loan from Sporting CP in 2019, Matheus Pereira has been one of the most exciting players in the Championship. The Brazilian contributed a ridiculous eight goals and 17 assists to the West Brom cause this season.

Pereira will be vital to Albion’s hopes of survival next year after they paid the buyout clause agreed between the two clubs, making him an absolute bargain of a buy at £9m.

An exceptional campaign ✨@MatheusPereira is the @IdealBoilers Supporters' Player of the Season. A worthy winner. pic.twitter.com/nqHEx06AnK

Speaking of exciting players, few players have gotten fans off their feet this season as much as Saïd Benrahma. The Algerian winger’s tally for the campaign was the inverse of Pereira’s, scoring 17 goals and providing eight assists.

Brentford have become experts at finding hidden gems in recent years and Benrahma might be the best of the lot. There are concerns over his lack of defensive work, but when you’re this good in attack, nobody is going to mind too much.

? Another game, another Benrahma beauty! ? #Bees ?

You can’t have a team of the year without the golden boot winner, right? There is no better pure number nine in the Championship than Aleksandar Mitrovic, who has made mincemeat of opposition defences this season.

The Serb’s 26 goals account for 39% of Fulham’s total goals in 2019/20, the largest proportion of any team in the league. Without him, the Cottagers might very well be languishing in the desolate purgatory of mid-table.

Seeing as we've had to throw today's content plan out the window, here's all 2⃣3⃣ of Aleksandar Mitrović's @SkyBetChamp goals he's bagged so far this season ?#FFC pic.twitter.com/hOuc6xs6L2

Brentford manager Thomas Frank really earned his crust when he moved Ollie Watkins from the wing to a forward position last year, bringing out a goalscoring machine in the process.

Watkins scored 25 goals this season after scoring ten in each of the past two campaigns, and added another to his impressive when he scored in the playoff semi-final second leg against Swansea. He has been a driving force behind the Bees push for promotion, which almost saw them go up automatically.