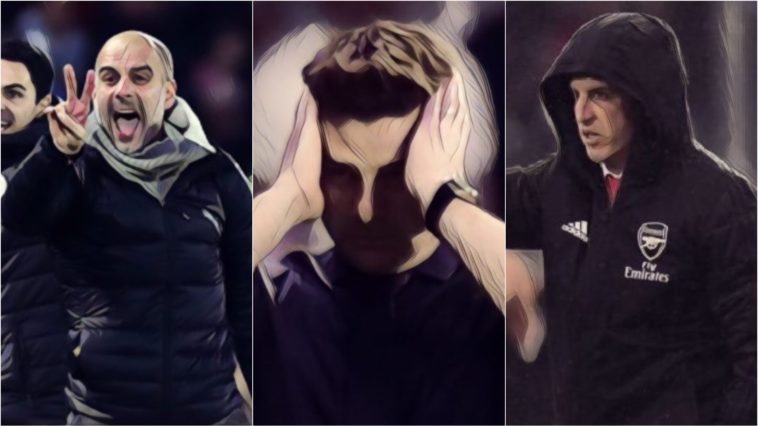 A new semi-regular feature in which we assess the level of crisis enveloping each Premier League club with our 100% scientific crisis rankings.

Get the hell out of the way, international break. We’ve got our Premier League back! Now, who is bricking it the most with the return of club football?

?| Klopp is all of us after the final whistle in the Man City game. https://t.co/u3ca2rMGVr

Yeah, things have only gotten even better since you last spoke to us. Best form in the league and we’re on the way to steal yo’ girl. Now where’s Frank’s knighthood?

Frank Lampard vs Jose Mourinho | The Student vs The Master

I can’t wait for this. pic.twitter.com/JZxtDp1BcL

Hi, my name is Chris Wilder and I’m here to piss all over your season. Have a nice day!

Butcher. Finest lamb chops in all the north east. Good honest labour. Always gives extra to the older ladies. Been known to eat all his stock pic.twitter.com/PpOkPcbIHd

Best defence in the league. Second most goals scored. Second in the table. And with Brodge on our side, we are totally ready to scupper Liverpool‘s title charge.

Brendan Rodgers when Spurs offer him an extra £1 a week. pic.twitter.com/7ByAOBfGua

Damn, we didn’t just lose to Manchester United. We got hammered. The good news is, there are so many bad teams this year we’re probably going to coast it regardless. Sweet.

They are keeping the ball more, passing more, making more attacking passes and from better areas, and shooting more, all without allowing more shots against.@AFHStewart & @fennertown, on Graham Potter's tactics at Brighton:https://t.co/mtmKtp9Izt#WhiteboardFootball pic.twitter.com/ak9H0Glohs

One win in five and we’re still in the top half? Booyah!

I have so many questions… #afcb pic.twitter.com/iTWBR9CSQ8

Two weeks ago we were three points above the dropzone. After last week we’re now three points off Arsenal. Progress!

Actually agree! Although, then there's people like Silva literally stealing a living based on nothing more than an ideology rather than actual success as the likes of Howe/Wilder have had.

We’ve had a pretty poor month of it and we’re still only two points off sixth place. Right, time to Burnley the bloody arse off everyone.

Caitlyn Jenner and James Haskell. Fucking hell, rather pair them up at Centre half to keep Chris Wood quiet when you’re holding onto a 1-0 Away at Burnley

Read: Five players who smashed it during the international break

Okay, maybe we were a bit hasty saying we’re definitely going to stay up, but look, we’ve got John McGinn and you don’t, so we’re pretty satisfied with ourselves.

You vs the guy she tells you not to worry about #AVFC pic.twitter.com/TgSv9eY1bp

Hey, do we kinda, sorta, I don’t know… look solid? Might we finally aspire to not terrible? All we need to do is be better than Arsenal, and I like those odds.

Solskjaer and unai Emery reading about the dismissal of poch. pic.twitter.com/x2mEWSfEPA

Look, we’ve had a tough run of fixtures lately, but we’re bound to bounce back again very soon. Who have we got next? Liverpool? Okay, scratch that.

The last time the Palace were in this much trouble, they appointed Roy Hodgson to steady the ship.

We’re not really playing any better after changing managers, but by god it feels great to win a game. Twelfth time lucky.

I mean, we didn’t have high expectations heading into the season anyway, so who’s to say we’re really doing all that badly when you think about it? Man, really wished I hadn’t got my hopes up after Man City.

When you realise you have no centre backs https://t.co/TIamS1NgNR

Read: Henry, the Hand of God and the most infamous handballs of all-time

I’m starting to get this bad feeling that we’re not going to win the title this year. How many times in a row have we won it, by the way?

So, are we going to get good soon, or nah? Cool, Championship it is.

Brace yourself, #saintsfc are back in action this weekend… pic.twitter.com/9QcdByWVHh

Fackin’ hell. One injury and we’ve turned into an absolutely horseshit team. Who knew Lukasz Fabianski is Lev Yashin reincarnated?

.@WestHam uploaded this video with the caption “See you Saturday, José ?” then deleted. pic.twitter.com/ouhVe8U2Wl

Somehow, Spurs sacked Mauricio Pochettino before we’ve sacked Unai Emery. There is surely some sort of elemental imbalance in the universe at hand here.

Arsenal fans now that the international break is over: https://t.co/EA0vRX82Fk

Read: Arsenal are stuck in a time loop and Emery is only making things worse

We haven’t won a league game in so long, but at least things can’t possibly much worse. Let me just catch up on the latest news real qui— oh, god. Oh no. No, no, no, no, no, no, no. Not this. Anything but this!

Mourinho: "I am humble"

Read: What does the future hold for Spurs under Mourinho?