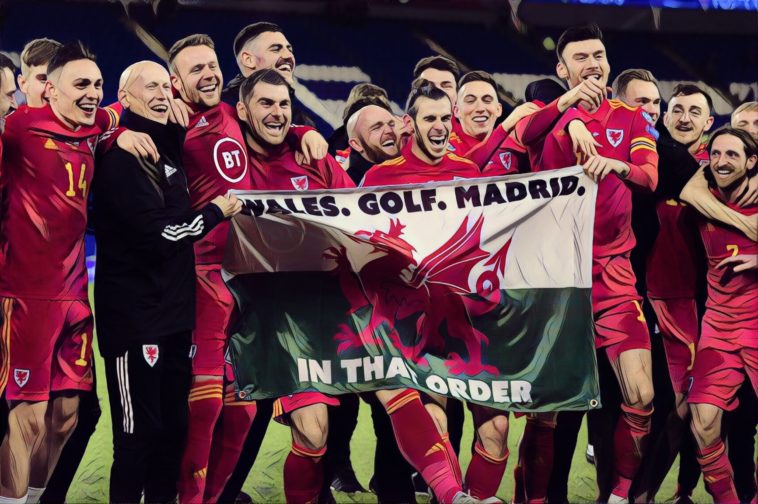 Already unpopular in Spain, the Welsh winger has come under massive scrutiny for celebrating with a flag that read: “Wales. Golf. Madrid. In that order”.

Gareth Bale’s relationship with Real Madrid has been a bit of a weird one. He’s scored some sensational goals and put in some terrific performances at the Spanish outfit since joining from Tottenham Hotspur six years ago, helping the team win four Champions League titles along the way.

But there’s always been this nagging suspicion that the Welshman doesn’t love the club. The fans have never taken him to their hearts, he’s regularly on the treatment table, and it’s been suggested he has never made much of an effort to learn the language. His own manager isn’t too fond of him either, with Zinedine Zidane openly admitting in the summer that it would be best if Bale left the Bernabeu.

The situation was neatly summed up by Spanish football analyst Pedja Mijatovic, who said that the winger prioritises international duty and his favourite pastime over playing for the club who pay his £600,000-a-week wages.”But to have someone like that at the club, who they say isn’t integrated and has other, more important worries than his own team and his club… the first thing he thinks about is Wales, then golf and after that, Real Madrid,” the Montenegrin said on Cadena Ser in October.

Wales supporters have lapped it up, turning the quote into a chant, which Bale himself admitted he found amusing, and one fan made a flag out of it, which read: “Wales. Golf. Madrid. In that order”. After the the Dragons qualified for Euro 2020 with a 2-0 win over Hungary on Tuesday, the flag made its way on the pitch amid the celebrations and his teammates held it in front of him.

Safely back in my house with this piece of Welsh cultural history! I think it’s safe to say that Gareth Bale will leave Real Madrid after Christmas!! #TheRedWall #TogetherStronger pic.twitter.com/ya0sDXCP38

While it has gone down a storm in his native country, unsurprisingly it has not been well received back in the Spanish capital with the country’s ever-rational media responding to the incident with ire. SPORT reported that the “grinning” Bale “mocked” Real, going so far as to question his professionalism:

“Bale played 88 minutes after not playing in any recent Madrid matches with an injury, and his professionalism and dedication to the club has been called into question.”

MARCA, essentially the pro-Real Madrid sports daily in Spain, were naturally all over it like a hot snot. They said it was the “umpteenth sign of disrespect” towards his employers, adding that a transfer in January appears “mandatory” now. They also report that Zidane is “tired of his antics” and isn’t even bothered to punish the player.

Ruben Jimenez wrote a scathing piece for the paper in which he says the former Southampton man has “belittled” the supporters, adding that the club “have taken far too long to get rid of Bale” while taking a potshot at the player’s agent:

“What this shows is that Real Madrid matters to him the least, despite the 13-time European champions having paid him an exorbitant salary since 2013 and helped him through his persistent injuries. Then he’ll act surprised when the crowd at the Estadio Santiago Bernabeu gets on his back. That will be followed by his agent, Jonathan Barnett, coming out and kissing his feet.”

AS have taken a more reserved tone on the matter, noting that his posing with the flag has “raised eyebrows” in Madrid. They report that Zidane will deal with the matter on Thursday.

The angriest contingent are, of course, the Madridistas, who will no doubt share their feelings with Bale should he take to the field this Saturday against Real Sociedad.

Gareth Bale and his wife when they get back to Madrid tomorrow: pic.twitter.com/xU7X0diGWE

Disrespect for my holy crest? Never, son. Get the fuck out of my club, @GarethBale11 #Bale #RealMadrid pic.twitter.com/KOh7CmWo2V

@Garethbale, Realmadrid respected you in many ways despite your injuries(MR. GLASS), but you turned around and insult the club thats been paying your wages even when you're on treatment table. Shame on you dude pic.twitter.com/PFoggZ6MRj

Read: What does the future hold for Spurs under Jose Mourinho?