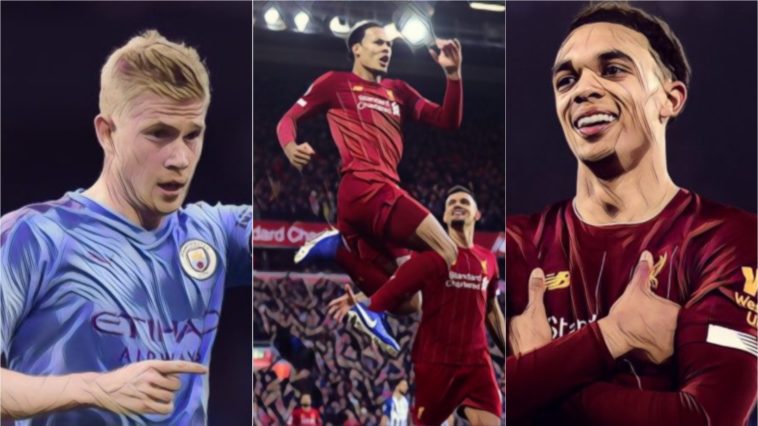 As we enter into the final third of the Premier League season, debates will start raging over who should be crowned the PFA Player of the Year for 2019/20.

Voting among players in the top flight will begin in early March and close around the third week of April, giving them ample time to consider which of their peers deserve the ultimate accolade at the end of the campaign.

Among the top five contenders for this year’s prize, four are Liverpool players. Quelle surprise. The league leaders have been arguably the most impressive team in the 28-year history of the Premier League, winning 25 of their opening 26 games.

There are even suggestions that they could have 10 of the 11 slots in the Team of the Year, such is their dominance. One shock from the list of the top five favourites to win the award is the absence of Mo Salah, who has been the top performer in the league over the past three years.

The Egyptian has 20 goal involvements this season, but that’s not enough to put him right in the conversation apparently, with one bookmaker deeming him as a 25/1 outside bet to regain the honour bestowed upon him in 2018. If not him, then who?

It is slightly strange that there has not been more of a clamour to put Trent Alexander-Arnold in the conversation for PFA Player of the Year, given how integral the young right-back is to Liverpool‘s tactical approach.

Jurgen Klopp prefers his side to move the ball through the full-backs rather than midfield, giving Alexander-Arnold and Andy Robertson huge responsibility on either flank. While the left-sided Scot often transports the ball by dribbling up the touchline, his colleague sprays it around the pitch like a peak David Beckham in his Manchester United heyday.

The 21-year-old, who has been backed by World Cup winner Cafu to win the Balon d’Or one day, has provided ten assists so far this season. Only Kevin De Bruyne has more, although the Liverpudlian’s 22 assists since the start of last season is the most of any player in the Premier League during that time. Without him the Reds’ ball movement and creativity would surely falter.

There is even a readymade narrative for Alexander-Arnold to catapult himself ahead of the competition for this award, that of the local lad who emerged from the academy to play a major role in winning the club’s first league title in 30 years. It’s the stuff of dreams, but it looks like he will be overlooked in favour of one of his teammates. Nonetheless, he is a shoo-in for Young Player of the Year.

Five of the Premier League’s best full-back pairings ever

Arguably the best player in the Premier League on his day, Kevin De Bruyne was a popular pick when we made our pre-season predictions and, although Manchester City are struggling compared to previous years, he should still be in that conversation.

The Belgian playmaker has contributed a highly impressive 16 assists already this season, putting him just four off equalling Thierry Henry’s record. He has never looked better, but it hasn’t been enough to stop City’s decline this season. They are still one of the best teams in Europe, but injuries and bad luck have seen them fall behind Liverpool as the country’s top side.

That makes it unlikely De Bruyne will be crowned Player of the Year, unless he does something dramatically incredible between now and the point at which voting closes, like reaching 30 assists for the campaign. It would take something that extraordinary for a non-Liverpool player to win it.

Having won so many plaudits and various awards – including the PFA Player of the Year – for his part in transforming Liverpool into a juggernaut last season, Virgil van Dijk has taken a slight backseat in all of the credit being doled out to squad members this year.

That means the Dutchman is only third favourite in this list rather than the frontrunner to win Player of the Year, despite the outrageously good defensive displays the backline has put in up to now.

If there is one man who exemplifies the excellence, consistency and transformation of the Merseyside outfit these past two years, then it is van Dijk, who has been worth every penny of £75m they paid Southampton for him and then some.

Only one of our writers backed Sadio Mané to become Player of the Year this season, although it feels as if the Senegalese international has been skirting on the edges of challenging for the award for a few seasons now.

The wide forward was the joint Golden Boot winner with Salah and Pierre-Emerick Aubameyang last season, scoring 22 goals in the league. This season he has only accumulated 12 so far, but he has increased his number of assists from one to six, meaning he is providing 0.89 goal involvements per 90 minutes. Excluding penalties, only Gabriel Jesus, Riyad Mahrez, de Bruyne and Sergio Aguero can boast a better rate.

Mané rarely puts in a bad performance, and it’s his consistency that could put him over the edge when it comes to polling his fellow professionals. If he doesn’t win it this year, then he will likely never have a better chance to do so.

Not a single one of our writers predicted that Jordan Henderson would be the next Player of the Year. In fact, there was probably no one on the planet who predicted such a scenario. But as of right now he is the frontrunner for the prestigious award.

It would mark a huge turnaround for a footballer who was deemed by many to not be near the level required for a title-challenging side, and yet, having taken over the captaincy from club legend Steven Gerrard, he has lifted the Champions League trophy and could be doing the same with the Premier League trophy this May.

Henderson’s recent form, which has seen him contribute two goals and three assists, has catapulted him into the conversation for the gong, but it’s his leadership ability, passion, determination and desire that has made him the favourite, as well as a beloved figure at Anfield.

These are all classic traits that the English football fraternity traditionally loves, but does this make him the best player in the league this year? Is Henderson more important to Liverpool than, say, van Dijk or Mané? Or what about Alexander-Arnold or Salah or Alisson Becker? He has been an important cog in this unstoppable machine, but he is ostensibly more readily replaceable than all of those players.

If Henderson does manage to be crowned Player of the Year, it will have a distinctly Scott Parker in 2010/11 feel about it.

Quiz: Can you name every PFA Player of the Year since 1992?

Read: The Soviet bombshell who ripped it up for Man United in the 90’s