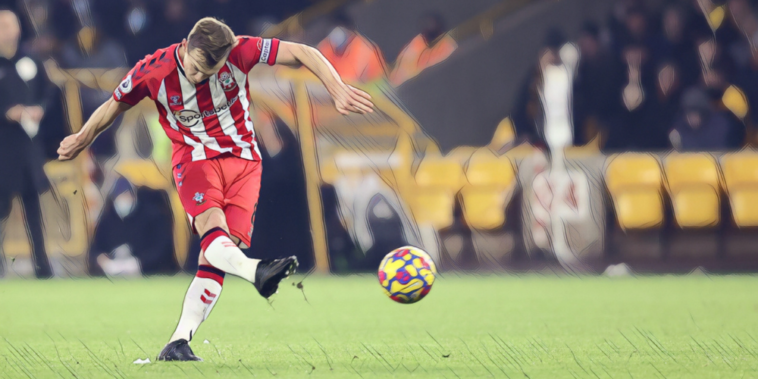 James Ward-Prowse continued to state his case as the Premier League’s finest set-piece taker this weekend, the Southampton midfielder firing home yet another fabulous free-kick in the Saints’ 2-2 draw at Brighton.

It was the 27-year-old’s fourth free-kick of the season and remarkably his 14th in the Premier League, moving him ahead of some of the division’s all-time greats for set-pieces scored.

Following the Saints’ star’s latest superb set-piece, we’ve looked back at the players to have scored the most goals directly from free-kicks in Premier League history:

Robert was very much your typical flair player. The former France international was capable of producing world class moments of magic that could win a game in an instant, but on the other hand, he could just as easily roam around the pitch looking completely uninterested at times.

When he was on form, however, the talented left-winger was simply sublime. He had a wand of a left peg and used it to smash home 11 free-kicks during his Premier League career.

Robert’s best seasons came in the colours of Newcastle where he starred for the Magpies between 2001 and 2006, scoring a catalogue of spectacular goals as the club competed at the top end of the Premier League.

He later had a short loan spell at Portsmouth, where his sole goal for the club was a signature set-piece special.

Larsson began his career in England under the tutelage of Arsenal manager Arsene Wenger, but departed the North London side to sign for Birmingham City in 2006 in search of regular first-team football.

The Swedish international developed a reputation for his dead-ball delivery and technical ability, winning the League Cup with Birmingham in 2011 – beating former side Arsenal in the final – before enjoying a six-season spell at Sunderland.

Larsson’s prowess from set-pieces played a crucial role in Sunderland’s fight to keep their Premier League status, with the midfielder scoring 11 free-kicks across a lengthy Premier League career.

The 36-year-old currently plays his football back in his homeland with AIK after spending more than a decade in English football, whilst he has also earned a huge 133 caps for the Swedish national side.

We have already waxed lyrical about the brilliance of diminutive Italian playmaker Gianfranco Zola plenty of times on this site already.

Zola rose to prominence with Serie A side Napoli and formed part of their title-winning side in 1990, where he played alongside the legendary Diego Maradona before moving on to form part of a cult Parma side in the nineties.

He signed for Chelsea in 1996 as the Premier League welcomed several exciting imports and his supreme technical ability would soon become the thing of legend.

So good was the former Italy international at taking free-kicks that opposition managers often sent their teams out with strict instructions not to concede cheap fouls around the edge of their own box, as with Zola’s dead-ball ability it was akin to giving away a penalty.

Thierry Henry, for a great number of Premier League fans, is the finest footballer the division has ever seen.

Henry was the main man in the iconic Arsenal teams of the early noughties, the former France international’s pace, skill and lethal finishing ability making him almost impossible to play against in his prime.

How to take a free-kick by Thierry Henry 😎#GoalOfTheDay // @Arsenal pic.twitter.com/8EVA2hX99X

In all honesty, free-kick taking was just a small factor in the all-round brilliance of a Premier League great, but he still managed to score the joint-second most amount of free-kicks ever in Premier League history.

This is Thierry Henry though, there was nothing he couldn’t do.

Not a bad player this fella.

Ronaldo arrived in England as a scrawny teenager in 2003 after Manchester United manager Sir Alex Ferguson paid Portuguese side Sporting Lisbon £12 million to secure his services.

The Red Devils’ legendary Scottish manager obviously knew a player when he saw one and immediately handed the youngster United’s famous number 7 shirt after the departure of David Beckham.

Ronaldo struggled for consistency during his first few seasons in England, but soon began a transformation that has seen him become one of the greatest footballers of all time.

He was also one of the first players in the Premier League to use the now famous ‘knuckleball’ technique and executed it to devastating effect with this stunning effort against Portsmouth in 2008.

Ronaldo departed to sign for Real Madrid in a world-record deal in 2009 and enjoyed a glittering career with the Spanish giants, winning four Champions League trophies and becoming the club’s all-time record goalscorer with an unbelievable 450 goals in 438 appearances.

The five-time Ballon d’Or winner returned to the Premier League and Manchester United last summer after a prolific spell with Juventus and will be hoping to climb further up these rankings.

In recent seasons we’ve seen Ward-Prowse execute efforts of wondrous whip, curl and devastating dip, his latest a driven effort to bring Southampton back into the game at Brighton.

Ward-Prowse has now scored eight free-kick goals in the Premier League since the start of last season, with the conceding of a foul against Southampton anywhere within his range now greeted with dread.

Southampton captain James Ward-Prowse stepped up to score a sensational free-kick in the Saints’ Premier League defeat to Wolves.

He still has a little way to go to reach the Premier League’s finest free-kick taker, but it’s well within the sights of the Saints’ skipper.

David Beckham is not just the best free-kick taker the Premier League has ever produced, he is one of the most technically gifted strikers of a football in the history of the beautiful game.

There is no great secret to Beckham’s perfection of striking a dead ball, he just practiced, practiced and then practiced some more.

The former England captain’s trademark curling free-kicks were a crucial part of the massive success Manchester United enjoyed during his 11 seasons with the Old Trafford club between 1992-2003.

David Beckham ✅
Free-kick outside the box ✅

You know the rest ☄️ pic.twitter.com/jquhkeDJUE

Becks went on to represent Real Madrid, LA Galaxy, AC Milan and PSG after leaving his boyhood club and will always be remembered as one of football biggest global icons.