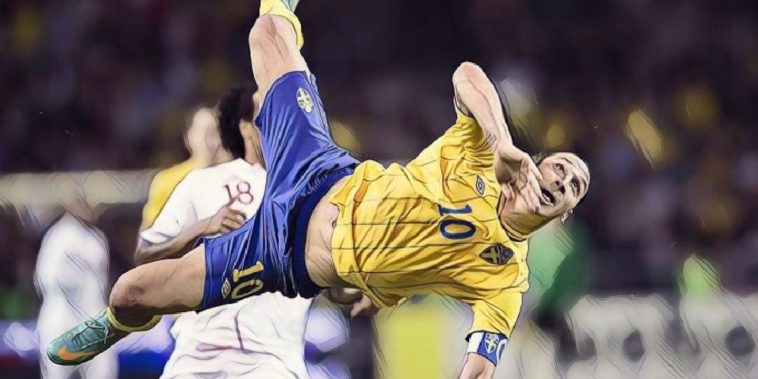 Goals are the lifeblood of the game and act as the addictive drug that draws football fans back to fixtures across the planet, so what better award than one that celebrates the greatest goals each year.

Some supporters will prefer thumping thunderbastards from distance, whilst others will delight in individual efforts or astonishing and acrobatic moments of athleticism.

The formation of the FIFA Puskas award – named after the legendary former Hungary and Real Madrid striker Ferenc Puskas – brings together the game’s most stunning strikes each year, with its intention to award the player to have scored the most aesthetically significant, or ‘most beautiful’ goal of the calendar year.

Following Erik Lamela’s award of the 2021 accolade, we’ve decided to look at the past winners of the prestigious gong. Here is every goal to win the Puskas award since its inception in 2009.

The inaugural winner of the award was Cristiano Ronaldo, a player who had elevated himself to a status as arguably the world’s best during six seasons at Manchester United.

Ronaldo’s recognition came after this thunderous effort from distance against Porto in the Champions League, the winger returning to his native Portugal and arrowing home a strike from a frankly audacious distance.

Ronaldo’s rocket almost caught the camera crew off guard given its distance and velocity, securing a vital 1-0 victory for Sir Alex Ferguson’s side to earn their progress to the semi-finals.

The goal went on to win the first ever Puskas award 🥇 pic.twitter.com/xcHz2NYUoU

United were unable to make it back-to-back European crowns as they were beaten in the final by Barcelona, however, before Ronaldo completed a world-record move to Real Madrid that summer.

Hamit Altintop developed a penchant for scoring stunners from range throughout his career, the midfielder having regularly produced the spectacular during spells at the likes of Schalke and Bayern Munich.

Altintop’s award came following this stupendous strike whilst on international duty with Turkey, a training ground routine coming off in spectacular fashion during a Euro 2012 qualifier against Kazakhstan.

Hitting a first-time volley from a corner is amongst the most difficult – and aesthetically pleasing – strikes possible, and few have ever executed it better than this moment of magic from Altintop.

Neymar now stands as the most expensive player in football history and as one of the most recognisable sportsmen on the planet, having starred on the biggest stage for Barcelona and Paris Saint-Germain in addition to becoming Brazil’s second-highest ever goalscorer.

Just a decade ago, however, the forward was a precociously talented teenager who often scored goals of sheer piss-taking proportions for Brazilian side Santos.

This effort was one of four consecutive nominations for the star and earned him the prize in 2011, a sensational solo goal that combines balletic balance with frightening footwork and admirable arrogance.

Miroslav Stoch followed in the aforementioned Altintop’s footsteps by volleying his way to the Puskas award with another set-piece special in 2012, a hopeful corner swung in the direction of the edge of the penalty area.

Stoch – despite being rapidly closed down by two opposition defenders – managed to launch a wondrous first-time effort back towards goal, whistling into the top corner to spark jubilant celebrations.

It was a moment of pure inspiration from Slovakia international and saw him beat the likes of Radamel Falcao and Neymar to the award, winning with a record 78% of the vote.

In 2012 Miroslav Stoch won the award with this superb long-range volley directly from a corner for Fenerbahce in the Turkish Super Lig against Genclerbirligi.pic.twitter.com/3BR4PRUZUs

Remember when Zlatan Ibrahimovic was often subjected to jibes that he couldn’t cut it against English opposition?

Those suggestions were still widely commonplace ahead of the Three Lions’ visit to face Sweden in November 2012, a fixture which marked the opening of the nation’s new 50,000-seat Friends Arena.

The Swedish superstar ensured it was an evening to remember as he scored all four goals in a 4-2 victory for the hosts, his fourth a moment of magnificent technique and outrageous audacity, launching himself into the air to score an overhead kick from all of 35-yards.

Joe Hart’s half-hearted headed clearance provided Ibrahimovic with a dropping ball that few – if any – would have imagined would present a goalscoring ‘chance’, Zlatan producing an acrobatic moment that would have not looked out of place in a tacky Jean-Claude Van Damme blockbuster.

World Cups often provide a platform for players to catapult themselves into superstardom and the 2014 edition was the tournament that James Rodriguez announced himself to the world.

The playmaker was one of the stars of the tournament in an exciting Colombia side, finishing as the World Cup’s leading scorer with six goals to win the Golden Boot.

That haul included a double in a last-16 victory over fellow South American hopefuls Uruguay, the second earning him the year’s Puskas award.

It won goal of the tournament and the Puskas award 🏆

Rodriguez’s cushioned chest control and dipping effort gains aesthetic value by crashing in off the crossbar, the highlight in a memorable tournament for the midfielder who soon secured a mega-money move to Real Madrid.

2015’s winner came from the lower tiers of Brazilian football with Wendell Lira claiming the prestigious accolade, an unconventional twisting overhead kick earning him his place in history.

The goal finished ahead of superb efforts from Lionel Messi and Alessandro Florenzi to scoop the prize and was the highlight of an otherwise unremarkable career for Lira, who announced his retirement the following year in order to focus on becoming a professional FIFA player and YouTuber.

The winner of the 2015 award was Brazilian Wendell Lira for Goianesia with this twisting volley. @wendelllira went on to be a professional FIFA player and Youtuberpic.twitter.com/g1DSXUwAZJ

Now this really is something.

We have to confess, we’re not avid watchers of the Malaysian Super League but we can’t imagine there have been many better goals scored in the competition than this strike from Mohd Faiz Subri.

It’s a set-piece special that veers and dips like a penny-floater kicked down a blustery beach front, the opposition goalkeeper left simply dumfounded.

We’re not even sure of the science behind the way the ball moves, and even less sure that Subri meant to put the ball on its bizarre trajectory, but this goal can be filed away in those deemed unsaveable.

The 2016 Puskas Award winner is something else… 😱💫

Olivier Giroud became the second Premier League player to win the Puskas award in 2017, with a goal that ranks highly amongst the most aesthetically pleasing in the division’s history.

Arsenal have produced some spellbinding football throughout the years and this was the North London side at their very best, quick inter-changing passing play ending with a fantastic finish.

Giroud plays his part early in the move with a clever flick before racing into the box, adjusting superbly to meet an Alexis Sanchez cross with a sensational scorpion kick, crashing his effort in off the crossbar to spark delight.

It was a once in a lifetime goal from the Frenchman and a deserving winner of the Puskas prize.

Mohamed Salah’s debut season at Liverpool is one of the greatest individual campaigns in Premier League history as the forward set a whole host of records, scoring 32 league goals to win the Golden Boot and a Player of the Year double.

Salah tormented defences and finished the year as the winner of the Puskas award for this Merseyside Derby strike against Everton, twisting into the penalty area before firing into the far corner.

A fine strike no doubt, but a Puskas award winner? We’re not so sure.

Scoring a 93rd-minute winner, that earns the Puskas award on your senior debut, it’s the stuff that dreams really are made of and exactly what Debrecen’s Daniel Zsori achieved in 2019.

The 18-year-old was making his first appearance for the Hungarian outfit when he produced this moment of pure inspiration in the dying stages of a clash heading towards stalemate, a perfect execution of the bicycle technique and an unforgettable introduction into senior football.

Capping off your senior debut with a 93rd minute bicycle kick from the edge of the box.

Son Heung-Min was named as winner of the Puskas Award in 2020, following the South Korean’s sensational solo goal during Tottenham’s 5-0 win over Burnley.

The forward picked up the ball on the edge of his own penalty area before embarking on an incredible lung-busting run, leaving a trail of Burnley defenders in his wake as he charged into opposition territory.

It was 12 seconds of individual brilliance from start to finish, as Son burst beyond a succession of challenges before calmly firing beyond Nick Pope.

Football might be a team game, but there’s something so exhilarating about watching a player take matters into his own hands and Son’s solo stunner is one of the great individual goals in recent memory.

For the second successive edition the Puskas Award has gone to a Tottenham player, with Erik Lamela claiming the prize for his moment of magic in last season’s North London derby.

Lamela has long had the ability to delight and frustrate in equal measure, but his improvised rabona finish during the 2-1 defeat to Arsenal at the Emirates was the winger at his mercurial best.

Erik Lamela has won the 2021 #PuskasAward for *that* goal in the north London derby! 🥇🔥pic.twitter.com/X0aakaHIKV

There appeared limited danger as the ball dropped to Lamela inside the area, but his ridiculous rabona – through the legs of Thomas Partey for added aesthetic – found its way beyond Bernd Leno and into the bottom corner.

Lamela was later sent off as Spurs crashed to derby defeat, perhaps offering a microcosm of his nine-year spell with the North Londoners.