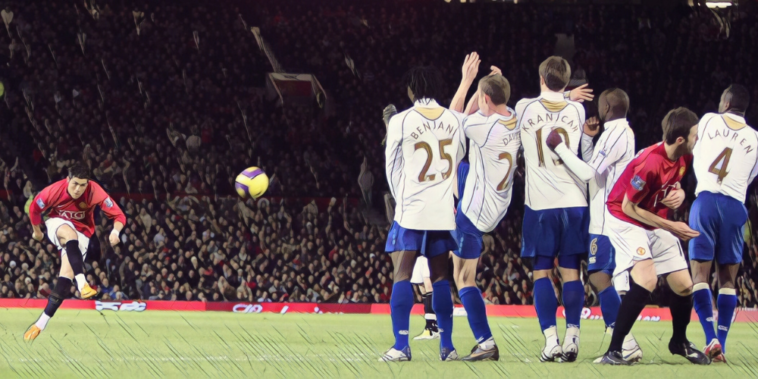 During the Premier League era we’ve seen some fantastic free-kick takers, a whole host of footballers capable of providing the perfect amount of curl, dip and power from set-piece situations.

The presence of an elite set-piece taker can transform a side’s fortunes and there’s been an abundance of stunning set-piece strikes across past Premier League campaigns.

Kevin De Bruyne scored a spectacular effort for Manchester City this weekend, a phenomenal free-kick that earned his side a 1-0 win at Leicester.

Would any free-kick compilation be complete without an offering from David Beckham?

The former Manchester United midfielder holds the all-time record for Premier League free-kicks scored and compiled quite the collection of set-piece specials during a glittering career at Old Trafford.

This effort against Aston Villa came during then Red Devils’ 1998/99 treble-winning season, a vital winner during the Premier League’s run-in and an effort that showcased the variety to his sublime technique.

David Beckham ✅
Free-kick outside the box ✅

You know the rest ☄️ pic.twitter.com/jquhkeDJUE

On a side perhaps more suited to a cross or left-footed effort on goal, Beckham restored the Red Devils’ lead after he whipped the ball over the wall and beyond the reach of Michael Oakes.

Christian Ziege scored one of the most memorable north London derby goals of the Premier League era during a meeting between Tottenham and Arsenal in December 2002, firing home this fantastic free-kick from distance to open the scoring at White Hart Lane.

Arsenal arrived at the home of their rivals as Premier League champions following domestic double success the previous season, but saw their hopes of defending their crown dented after a 1-1 draw.

Robert Pires’ penalty for the Gunners salvaged a point, after Ziege’s moment of brilliance had sent the Spurs’ support into raptures.

In the seasons before a takeover that transformed Manchester City’s future forevermore, the arrival of Elano from Shakhtar Donestsk – during the chaotic tenure of Thaksin Shinawatra – was the signing that got the City support excited.

Having followed the well-trodden path from Brazil to Ukraine before his arrival into English football, Elano had fine-tuned the technical talents that soon had him cherished as a fan favourite at the Etihad.

Comfortable in possession and with an eye for a defence-splitting pass, he quickly made his presence known and in his early months capped a man-of-the-match performance against Newcastle with this rifled effort from distance.

Sadly for Elano his influence waned the following season after the arrival of compatriot Robinho, the headline signing as a new era was ushered in under Sheikh Mansour.

Undoubtedly one of the most memorable free-kick goals in Premier League history, Cristiano Ronaldo’s effort against Portsmouth has remained a part of the league’s folklore.

Ronaldo was in sublime form during the 2007/08 season as the Portuguese forward’s performances carried him towards a first Ballon d’Or, with Portsmouth perhaps fearing the worst after conceding a free-kick within shooting distance.

Four long strides backwards, the familiar wide-legged stance, and a sharp intake of breath later, Ronaldo wrapped his laces through the ball to score a truly sublime goal.

Occasionally goalkeepers can only stand and watch as an unstoppable effort flies beyond their reach and that’s exactly what David James did.

He stood motionless, bamboozled and baffled, as Ronaldo’s rocket defied gravity on its way to the top corner.

Later that same season, Fábio Rochemback channelled his inner-Ronaldo to smash home this glorious goal as Middlesbrough thrashed Manchester City on the final day of the 2007/08 campaign.

In what was the last fixture before Sheikh Mansour’s takeover of the Mancunian side, City were hit for eight at the Riverside with Rochemback scoring the pick of the bunch.

1️⃣0️⃣ days to go in the @TAGHeuer Countdown… pic.twitter.com/x0XjhpiMVH

The Brazilian lined up from an ambitious distance before launching the ball beyond Andreas Isaksson, as Middlesbrough recorded their biggest ever Premier League win and ensured an embarrassing end to Sven-Goran Eriksson’s reign as manager at Eastlands.

Hull gambled on the talents of Geovanni during the 2008 summer transfer window, signing the former Barcelona midfielder following his release by Manchester City.

The newly-promoted side had hoped the Brazilian could rekindle some of his old magic and were left delighted following an impressive start, with the summer arrival scoring spectacular goals in shock wins at north London rivals Arsenal and Tottenham.

Having scored from range to equalise in the victory over Arsenal the previous weekend, Geovanni repeated the trick with this free-kick to secure a 1-0 win at Tottenham and maintain Hull’s strong start to the season.

Payet, for a short time in East London, was almost in a league of his own, a midfielder with more tricks than a clown’s pocket and one worth the admission fee alone.

Just look at this free-kick against Crystal Palace, one which no matter how many times it is viewed still convinces you it is heading well over the bar.

Payet may have left West Ham under a cloud, but you can bet there’s still a significant section of Hammers fans who regularly rewatch his best bits at the Boleyn Ground.