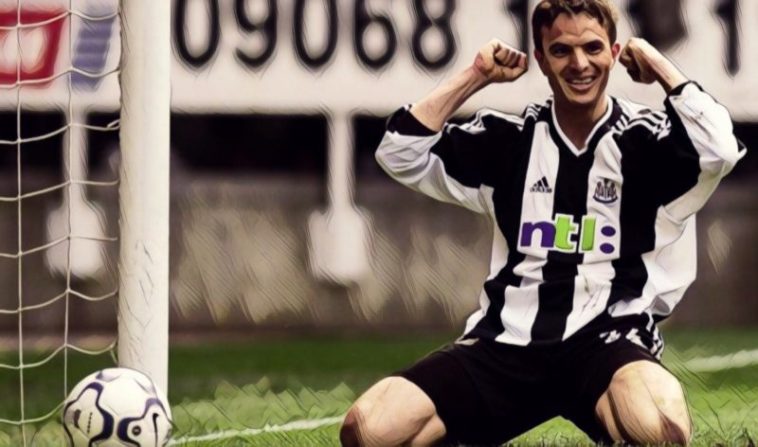 There is something, acknowledged widely in footballing circles, that is just more aesthetically pleasing about watching a pure strike of a football from a left-footed player.

That belief – which sits alongside another universal if unfounded view that goals that go in off the crossbar are infinitely better than those which don’t – leads us on to arguably one of the sweetest left pegs the Premier League has ever witnessed.

The mercurial talents of Laurent Robert.

Robert arrived as a big-money buy for Newcastle shortly after the turn of the millennium and spent five seasons in the football-crazed North East city, establishing himself as a cult hero at St James’ Park and producing a series of magical moments the Magpies’ following will find difficult to forget.

Those unfamiliar with Robert’s talents may gasp at his Youtube montages and highlight reels, though those snippets fail to tell the true story of a player who delighted and frustrated in equal measure.

Newcastle, a one-club city with a fanatical fanbase, are often described as a sleeping giant of English football, but in the years either side of the turn of the century hopes were high that long-awaited silverware could finally be heading to a success-starved region.

The glitz and glamour of Kevin Keegan’s ‘Great Entertainers’ in the nineties had faded in subsequent spells under the likes of Kenny Dalglish and Ruud Gullit, but the 2000’s saw hope restored for the Magpies following the arrival of home-town hero Sir Bobby Robson.

Robson’s pedigree and the prolific goalscoring of Geordie goal-machine Alan Shearer set a fine foundation on which to build, whilst a solid core of Gary Speed, Kieron Dyer, Shay Given and Nolberto Solano was added to in the summer of 2001 by the arrivals of promising young talents Jermaine Jenas and Craig Bellamy.

The marquee arrival of the summer, however, was the £9.5m acquisition of Robert from Paris Saint-Germain.

Robert had recently broken into a fine French national team and had impressed during spells in his homeland with Montpellier and pre-takeover PSG, but his reputation on these shores was minimal, until he started to do what English football fans soon discovered he did best – score inexplicably brilliant goals.

The winger opened his account and provided two assists in just his third game for the Magpies, the summer signing instantly endearing himself to his new supporters with a match-winning turn during a Tyne-Tees derby at Middlesbrough.

The following game, however, was when we saw Robert produce his first truly jaw-dropping intervention.

Manchester United – winners of the Premier League title in each of the previous three seasons – were the visitors, and Sir Alex Ferguson’s side were on the wrong end of a Robert blockbuster just five minutes into the contest.

A free-kick, slightly to the right-hand side was perfectly angled for a left-footed specialist, though the distance meant hopes of a goal were likely optimistic at best amongst the home crowd.

Three short steps and one swing of his left boot later, St James’ Park erupted after Robert launched a heat-seeking missile of a strike into the top corner, an unstoppable effort which must have left World Cup-winning goalkeeper Fabien Barthez questioning his sanity at even attempting a dive.

That free-kick was the first glimpse of the set-piece prowess the Frenchman possessed, with seemingly no angle or distance off limits – Robert backed himself.

He finished his debut season in English football with eight league goals – including a record five free-kicks – and a further two in cup competitions, Robson’s side bouncing back from a disappointing mid-table finish the previous year to secure a top four finish and Champions League qualification.

Amongst his goals also included 11 assists – only three players in the entire Premier League managing more – the predatory talents of Shearer benefitting in particular from Robert’s ability to whip in tantalising crosses from his station on the left-hand side of Newcastle’s midfield.

We digress, however, and it is goals we are all here for, starting with another thunderbastard of an effort from distance against Southampton in February 2002 worth celebrating.

Robert’s repertoire seemed to include all kinds of finishes, from perfectly placed efforts to dipping drives from distance and perhaps his true trademark – smashing the sh*t out of the ball.

This fine free-kick against the Saints falls into that latter category, the purest of hits from all of 35-yards which left the despairing Paul Jones utterly helpless. He backed himself from any angle and at any distance against any opposition, for better or for worse.

A fine debut season saw Robert’s reputation continue to burgeon and he became widely recognised as one of the Premier League’s finest set-piece specialists, opposition fearful whenever a chance presented itself anywhere within his range.

In a side containing a free-kick queue including Solano and Shearer, Robert remained the main man.

The following season saw Newcastle once again secure a top four finish and Champions League qualification, and whilst Robert’s goal tally dropped somewhat, his penchant for the spectacular certainly did not diminish.

Amongst his collection included a winning free-kick against Liverpool – a side which became all too familiar with Robert’s golazo tendencies – and a drilled late-season effort at Everton, a strike which came from a seemingly impossible angle and is likely to have surprised each of those inside the ground aside from perhaps the goalscorer himself.

Peak Robert, however, was yet to come in the form of a one-man Goal of the Season competition throughout the 2003/04 campaign.

First, he began with a brilliant brace in a 4-0 destruction of Tottenham at St James’ Park in December 2003, lightning striking twice as Robert unleashed two crackers from distance to down the north London side, leading teammate Shearer to brand the winger ‘unstoppable’.

The first showcased the Frenchman’s incredible technique as he hit a sensational dipping volley over Kasey Keller, before a thumping effort from distance flew past the exasperated US international.

"A goal out of nothing, and a goal from the 🔝 drawer!"

The pièce de résistance for a player who often mixed the moody with the magnificent, however, came with an inexplicable effort against Fulham that same season.

A player who had built his reputation on making the extraordinary almost routine throughout his career in English football had his crowning moment, coming from all of just six yards.

It’s a goal that – even when viewed countless times – is difficult to quite comprehend, a mid-air contortion of the midfielder’s body that leads to the execution of a sensational back-heeled volley.

It’s weird, but it’s wonderful and encapsulates the very best of Laurent Robert.

Laurent Robert on his favourite goal (plenty of contenders!):

"I scored goals. It's true that one of the most beautiful was that one against Fulham with #NUFC." 🖤🤍 pic.twitter.com/YPSpc5IAX3

Robert’s status as a fans’ favourite on Tyneside sadly lasted little longer following the sacking of Robson, the club’s fortunes dipping significantly following the arrival of Graeme Souness as manager and the Frenchman’s falling out-of-favour under the Magpies’ new boss.

He spent a season on-loan with Portsmouth but the magic of yesteryear failed to resurface, the once inconsistent genius of the player replaced with consistent performances of much mediocrity.

Former teammates have suggested Robert’s attitude prevented him from reaching even greater heights, the winger winning just nine international caps and failing to win a major trophy throughout his career.

Andy Griffin, a teammate at both Newcastle and Portsmouth, believes inconsistency was to blame for Robert failing to move on to one of Europe’s leading clubs.

“Laurent at Newcastle was sensational on his day. Other days he didn’t have a care in the world and you’d then have to carry him, but, in saying that, the next game he would get the winner and be unstoppable.

“He was an exceptional player and, generally speaking, his time at Newcastle was a huge success.

“With some of the goals and some of the assists, he was a remarkable player, but very much his own man. If he didn’t want to work on a Saturday afternoon then he wouldn’t – and there was nothing you could do about it.

“The reason why he didn’t make that further step to one of the top, top teams around the world was because of that little bit of inconsistency.”

A player undoubtedly capable of producing world-class moments but one who never reached those heights on a regular basis, Laurent Robert’s legacy leaves him fondly remembered in the North East of England.

Rarely has a Premier League ground crackled with anticipation quite like St James’ Park when Robert picked up possession within 40-yards of goal, a player capable of producing unexpected and unforgettable moments.

His career may not have delivered huge success, but Laurent Robert will forever be remembered as one of the Premier League’s great golazo merchants.