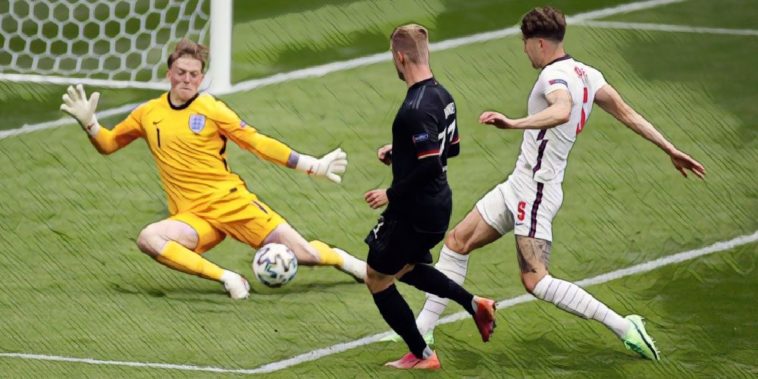 England have secured a place in the Euro 2020 final, with Gareth Southgate’s pragmatic approach paying off after a strong tournament showing thus far.

Although it hasn’t always been easy on the eye, the Three Lions have looked incredibly assured defensively, with Southgate using the blueprint of recent major tournament winners to instil a more cautious, yet seemingly winning, style of play.

It’s not always a guaranteed route to glory, yet there’s no question that keeping things tight at the back is of paramount importance if you are to triumph at international level, as France proved during their World Cup-winning campaign in 2018.

There’s no greater indication of a solid defensive side than a clean sheet, with registering a shutout likely to mean a strong progression in a tournament.

With that in mind, let’s take a look at the countries with the most consecutive clean sheets in European Championship history.

Much like at Euro 2020, Belgium were tipped as one of the favourites five years ago, with then-boss Marc Wilmots hoping to guide his ‘Golden Generation’ to maiden tournament success.

After a disappointing opening game defeat to Italy, the Belgians recovered well to secure progression out of the group stages, thumping Ireland 3-0 before edging past Sweden with a 1-0 win in the final group game.

That set up a last-16 clash with surprise package Hungary, although the Red Devils’ firepower proved too much as they coasted to a 4-0 win, ‘keeper Thibaut Courtois registering his third straight clean sheet in the process.

Looking almost unbeatable and handed a favourable draw against tournament debutants Wales, a Belgium win looked a certainty, particularly when Radja Naingolaan struck early on. However, almost unbelievably Chris Coleman’s side hit back, going on to win 3-1 with free agent Hal Robson-Kanu netting the pick of the bunch with that iconic Cruyff-turn and strike.

Another side reaping the rewards of a shutout at Euro 2016, Poland managed to navigate a way through to the quarter-final’s, despite scoring just four times in five games.

After an opening game 1-0 win against Northern Ireland, the Poles then held world champions Germany to a goalless draw, before securing their place as group runner-up with another 1-0 win over Ukraine, courtesy of a Jakub Błaszczykowski goal.

It wasn’t until the last-16 that they did concede a goal, although it wouldn’t prove costly, as Adam Nawalka’s side clinched their place in the quarter-final’s via penalties, with the score having been 1-1 after extra-time.

The underdogs then made the perfect start to their last eight clash with Portugal, as Robert Lewandowski fired home inside two minutes, before Renato Sanches hit back soon after, the game eventually going to penalties where the eventual tournament winners clinched a 5-3 shootout victory.

Drawn in a group with Portugal, Spain and Russia, Greece seemingly had no chance of progression at Euro 2004, yet made the perfect start to stun their Portuguese hosts with a 2-1 win in the opening game.

A 1-1 draw with Spain followed before they slipped to a 2-1 defeat in their final group encounter, yet their four points proved to be enough as they edged La Roja to second place on goals scored.

With France their next opponents in the quarter-final’s, the Greek minnows pulled off another shock result to clinch victory, Angelos Charisteas netting the game’s only goal.

The semi’s would follow a similar pattern as the defensive-minded side snatched a 1-0 win in extra-time against Czech Republic, before completing the ultimate footballing underdog story to beat Cristiano Ronaldo and co 1-0 in the final, despite their opponents having the advantage of playing on home soil.

Four years prior, Portugal had shown their own defensive resilience to reach the semi-final’s despite having been drawn in a particularly difficult group that included both England and Germany.

Humberto Coehlo’s side secured an opening game comeback win over the Three Lions, having recovered from a 2-0 deficit to win 3-2 late on, before edging past Romania courtesy of 94th minute from Costinha – the game’s only goal.

Their second clean sheet of the tournament followed with a Sergio Conceicao-inspired thrashing of the Germans to secure top spot, the Portuguese joined in the knockout stages by another surprise package, Romania.

They would then see off Turkey in the quarter-final’s thanks to a Nuno Gomes brace in their 2-0 triumph, before ultimately coming up short in the last four, where they lost 2-1 to eventual winners France, with David Trezeguet netting a stunning golden goal in extra-time.

The breakers of English hearts at Euro ’96, Germany ended the tournament as European Champions, having picked up three successive clean sheets en route to their triumph.

All three of those shutouts came in the group stage as the Germans powered into the next round, winning against Czech Republic, followed by a 3-0 Jurgen Klinsmann-inspired win over Russia, with a goalless draw against Italy seeing them top the group.

They would see-off a talented Croatia side in the quarter-final’s, before setting up a clash with arch-rivals England in the last four at Wembley, the hosts looking for revenge for their exit against West Germany back at Italia ’90.

With the games locked level at 1-1 after 120 intense minutes of football, the game went to penalties, Gareth Southgate’s miss ultimately proving costly as the Three Lions crashed out.

Berti Vogts’ side would go on to clinch victory in the final with a 2-1 win, courtesy of an Oliver Bierhoff winner in extra-time, with the tournament success to be the first for a reunified Germany.

Italy have long been famed for their defensive prowess so it’s no surprise to see them included in this list, the Italian team of 1980 registering three successive clean sheets in what was the first tournament to feature eight teams.

Like Germany in ’96, all of Italy’s shutouts came in the group stage, starting with a goalless draw against Spain, before they clinched a 1-0 win over England through Marco Tardelli’s late goal.

Enzo Bearzot’s side – which included legendary defender Claudio Gentile – were then held to a goalless draw by Belgium, meaning they would miss out on a place in the final, with only the winners of the two groups progressing in a tournament that had no semi-final stage.

There was to be a third-place playoff for Italy, however, yet they were beaten 9-8 at the end of a mammoth penalty shoot-out against Czechoslovakia, Fulvio Collovati the only player to miss a spot-kick after the game itself had ended 1-1.

Unlike that 1980 side, the current crop of Italian talent could well taste European Championship success, with Italy set to play England in Sunday’s Euro 2020 showpiece at Wembley.

Having suffered the embarrassment of missing out on qualification for the 2018 World Cup, Roberto Mancini has magnificently managed to rebuild the side, the Azzurri currently on a national-record run of 33 games unbeaten.

The current tournament has shown their typical defensive brilliance laid bare, Mancini’s men managing not to concede in the group, beating Turkey, Switzerland and Wales in relatively comfortable fashion.

They only eventually conceded what proved to be a consolation goal in the 114th minute of extra-time in the last-16 against Austria, before going on to beat a much-fancied Belgian side 2-1.

In the semi’s they came up against an impressive Spain side, yet with their veteran defensive pairing of Giorgio Chiellini and Leonardo Bonucci in tow, they hung on to take the game penalties, where Chelsea midfielder Jorginho slotted home the decisive spot-kick.

Euro 2016 wasn’t exactly renowned for its goals was it?

Another side on this list from that tournament, Germany managed to last until the 78th minute of their quarter-final clash with Italy before conceding a goal in the competition.

Prior to that they had beaten Ukraine and Northern Ireland in the group stage and been held to a goalless draw by Poland, before securing a comfortable 3-0 win over Slovakia in the last-16.

Former Arsenal man Mesut Ozil then gave Joachim Low’s side the lead in their last-eight clash with the Italians, before they eventually conceded a goal, Leonardo Bonucci firing in from the penalty spot to take the game to extra-time and eventually penalties, where Germany would triumph 6-5.

In the semi-final, the then World Cup holders were pitted against hosts France and despite a strong showing were ultimately dumped out of the competition, with Antoine Griezmann netting a brace on route to claiming the Golden Boot.

Prior to the current tournament, the glorious Spain side of Euro 2012 were the only team to have gone five straight European Championship games without conceding, as they powered their way to a third successive major tournament triumph.

Having won the 2008 edition and the 2010 World Cup it seemed that no one would be able to stop Vicente Del Bosque’s side – and that’s exactly how it proved.

La Roja were held to a 1-1 draw by Italy in the opening game, with Antonio Di Natale scoring what proved to be the only goal that they would concede in the whole tournament, before hitting four past Ireland and then edging Croatia to finish atop the group.

A Xabi Alonso brace secured a quarter-final win over France, as they went on to beat Portugal on penalties in the next round following a goalless draw, with the shootout memorably seeing Cristiano Ronaldo opt to take the ‘glory’ fifth penalty, only for Spain to win before it reached his turn.

Pitted once again against Italy in the showpiece, Del Bosque’s men produced arguably the finest major final display of all-time, running out comfortable 4-0 winners with a truly mesmeric display in Kyiv.

The only other side to have matched that tally of five successive clean sheets at the Euro’s is the current England crop, Gareth Southgate’s men having failed to concede in their first five games at Euro 2020.

After vanquishing World Cup semi-final opponents Croatia in the first game, the Three Lions stuttered to a goalless draw against rivals Scotland, before another less than convincing win over Czech Republic.

With just two goals scored in the group stages, public optimism wasn’t exactly high heading into the knockout phase, yet that all changed with a historic 2-0 win over Germany at Wembley, a result that put to bed the penalty shootout nightmares of 1990 and 1996.

A 4-0 thumping of Ukraine in the quarters set up a tense clash with Denmark in the semi’s, yet England overcame the pressure and the nerves to claim victory, despite having fallen behind with as they conceded their first goal of the tournament via Mikkel Damsgaard’s belting free-kick.

They are currently now preparing for just a second major tournament final and a first since 1966, with ‘only’ Italy standing in their way of a first European Championship success.