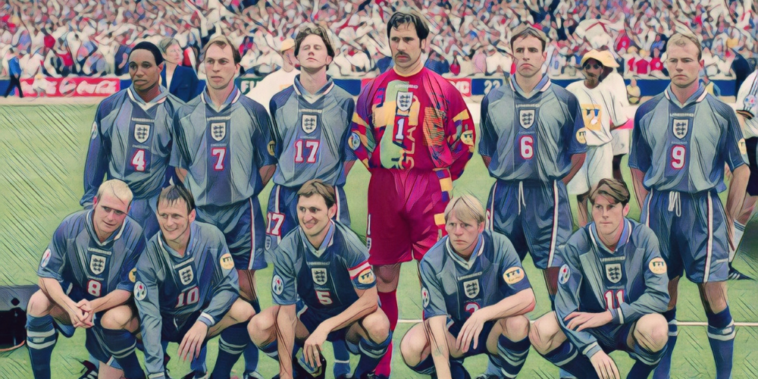 Euro ’96 was the tournament when football so very nearly came home for England, the home nation roared on by feverish support as they reached the semi-finals before an agonising – and somewhat predictable – shoot-out defeat to the Germans.

Terry Venables’ side won admirers throughout their run, however, including a 4-1 thrashing of a heavily fancied Netherlands side in the group stage that remains one of the Three Lions’ most iconic tournament performances.

Their path to glory was blocked by a familiar opponent in the last four however, Alan Shearer’s early goal cancelled out by Stefan Kuntz with the old enemy emerging victorious on penalties.

As England prepare for this summer’s European Championship, we look back with nostalgia at their 1996 vintage and a side that won plaudits, if not the major silverware that continues to prove elusive.

Here is the England XI that suffered semi-final heartbreak to Germany at Euro ’96.

England’s number one for more than a decade, Seaman enjoyed arguably his best period during Euro ’96 to be named alongside Germany’s Andreas Köpke as the best goalkeepers at the tournament.

The Arsenal shot-stopper saved a penalty from Scotland’s Gary McAllister in the group stages and was the hero of the quarter-final win over Spain, saving from Miguel Ángel Nadal in the shoot-out following a goalless draw.

Seaman won 75 caps over an England career that saw him represent the Three Lions in 15 consecutive years, spanning from 1988-2002.

Terry Venables fluctuated between 4-4-2 and 3-5-2 systems during the tournament, with England lining up in the latter amid Gary Neville’s suspension for the semi-final clash.

Gareth Southgate started on the right of the three centre-backs, his evening immortalised into English football folklore for all of the wrong reasons, the defender’s penalty saved as the host nation crashed out.

#OnThisDay in 1996. Now #ENG boss Gareth Southgate missed the decisive penalty as the #threelions were knocked out in the semi-final of Euro 96 by #GER… pic.twitter.com/4HsaU76v03

Southgate’s misery was followed by a soul-sapping Pizza Hut advert mocking his miss, before earning his stripes upon retirement to become England manager in 2016.

After guiding the Three Lions to the semi-finals of the World Cup three years ago, he has the opportunity to exorcise his demons and end England’s trophy wait this summer.

England’s captain lined up at the heart of the three-man backline, in what was Adams’ first major tournament since Euro ’88.

The Arsenal icon is the only England player to have represented the Three Lions at major tournaments in the eighties, nineties and 2000s, whilst he is also the only player to captain title-winning teams in three decades.

Adams was a natural leader for both club and country and spent his entire career with the north London side, making 672 appearances and winning 10 major honours.

Stuart Pearce had been one of the unfortunate members to miss from the spot as England crashed out of the World Cup at the semi-final stage six years earlier, though the experienced defender made amends by netting in the shoot-out win over Spain in the quarter-finals of Euro ’96.

Pearce’s relief was palpable as he exploded with emotion upon converting, and stepped up again to slam home his kick in the defeat to Germany.

Pearce made his final appearance for England in 1999 aged 37 years and 137 days, making him the third-oldest outfield player to have represented the nation.

Time has perhaps not been kind to perceptions of Darren Anderton with the all too common label of ‘Sick Note’ often sticking to the former Tottenham star, though his continued injury problems should not detract from a fine player at his peak.

Anderton was selected in a wide midfield/wing-back role for England against Germany, having been included in the squad despite missing the majority of the 1995/96 season through fitness issues.

The midfielder came agonisingly close to putting England into a first major final since 1966, his extra-time effort coming off the post to deny the hosts a Golden Goal winner.

See also – Golazo Merchants: Darren Anderton and his wand of a right peg

Paul Ince returned to the side for the semi-final, having missed the last eight victory over Spain through suspension.

Ince was the only player in the England squad playing their football on the continent at that time, having signed for Inter Milan following a successful period at Manchester United that delivered two league titles, two FA Cups and three consecutive inclusions in the PFA Team of the Year.

The combative midfielder also holds the distinction of becoming the first black player to captain the England national side.

England’s second most experienced player behind Stuart Pearce at Euro ’96, David Platt had already represented the Three Lions at two previous major tournaments before the finals on home soil.

He memorably scored a stunning late winner to defeat Belgium at the 1990 World Cup in Italy, before moving to Serie A at the height of its success in the nineties with Juventus and Sampdoria.

Platt had appeared as a substitute during England’s group games before being handed a start amid Ince’s suspension for the quarter-finals, maintaining his place for the Germany clash as Venables shuffled his pack once more with Neville missing.

The midfielder retired from international football shortly after the tournament having scored 27 goals in 62 caps, the third-highest goal total by an England midfielder.

Gascoigne was the jewel in the English crown and had shone throughout the tournament, his exquisite goal against Scotland and subsequent ‘Dentist Chair’ celebration etched into the memory.

The midfielder sparkled in that signature care-free and creative manner, being handed a licence to ghost forward and make things happen behind England’s striking duo.

Gascoigne memorably came within an inch of turning home Alan Shearer’s cross-shot to score a Golden Goal winner for England in the semi-final with Germany, and netted from the spot in the shoot-out.

Euro ’96 was a platform for one of England’s most naturally talented players to showcase his full repertoire in front of an adoring home crowd, though it proved not quite enough to seal major tournament success.

Steve McManaman started all five of England’s games at Euro ’96, including the semi-final defeat to Germany on the left-hand side of the nation’s 3-5-2 system.

McManaman had established himself as one of the best wingers in the Premier League after coming through the ranks at Liverpool, though despite a strong 1996 finals campaign his international career largely failed to match his achievements at club level.

He departed Liverpool on a free transfer in 1999 and signed for Real Madrid, twice winning the Champions League with the Spanish giants to become one of English football’s most successful exports.

One half of a strike partnership that propelled England through to the latter stages, Teddy Sheringham was a relative late bloomer when it came to international football before making his mark at Euro ’96.

The Tottenham forward dovetailed brilliantly with Alan Shearer, the two at their destructive best during the 4-1 thrashing of the Netherlands in the group stage with both players scoring twice.

Sheringham scored 11 goals in 51 appearances for England and featured at each of the next three major tournaments despite being 30 at the time of the ’96 finals, the forward becoming the Premier Leagues oldest ever scorer and outfield player after continuing past his 40th birthday.

Alan Shearer was the Premier League’s most feared forward after scoring 96 league goals across the three previous seasons with Blackburn, though there were question marks regarding his England place in the build-up after a 21-month drought at international level.

Shearer silenced any doubters after scoring in the tournament opener against Switzerland, before finding the net against Scotland and scoring twice against the Netherlands to fire England into the knockout stages.

Shearer’s third-minute goal handed the Three Lions the perfect start in the semi-finals before Germany hit back and won on penalties, though his performances earned the forward the Golden Boot and cemented his status as one of the world’s best.

That summer saw Shearer sign for boyhood club Newcastle in a £15m world-record deal, winning a third consecutive Premier League Golden Boot in his debut campaign and retiring as both the Magpies’ and division’s all-time record goalscorer.