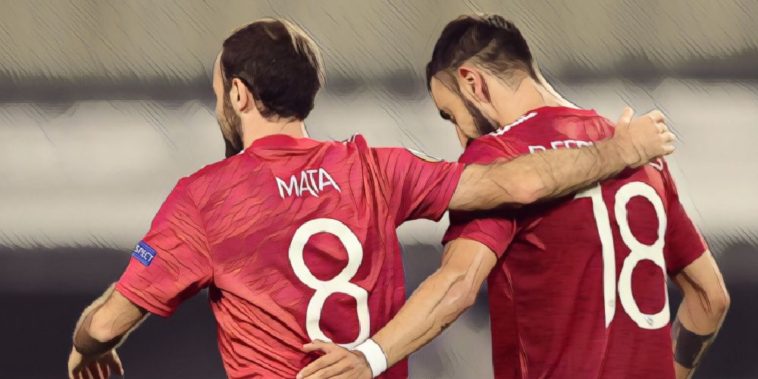 Manchester United midfielder Juan Mata has admitted he considered an exit from the club, while he also warned teammate Bruno Fernandes off his number eight shirt.

After months of speculation over his future, the Spaniard recently put to bed the uncertainty by signing a new one-year contract to remain at Old Trafford for the coming season, with his existing deal having expired in the summer.

The 33-year-old – who joined the Red Devils from Chelsea back in January 2014 – has won the FA Cup, League Cup and Europa League in his time at the club, while he’s also netted 51 goals in 273 games across all competitions.

As he now prepares for what is to be his ninth season as a Manchester United player, the World Cup winner has revealed he’s delighted to be a part of the club for another year.

“Yeah, I feel really happy and excited and fresh and energised for a new season,” he told manutd.com.

“I didn’t know that it was the ninth [season] already, but time flies. Of course I’ve lived many good moments at this club, other difficult ones, but yes, I’m staying and I’m very much looking forward for what I hope will be a good season for the team and for myself.”

The veteran midfielder was asked if his decision to stay was a ‘no-brainer’, although he admitted that he had taken time to come to a decision, amid interest from elsewhere.

“No, to be honest, you have to think about it,” he admitted.

“Of course, because I was a free agent at the end of my contract and, as is normal in the football world, you receive some calls from different clubs and think about maybe potential new stages in your career but, on the other hand, the feeling of being at this club and especially because of how last season went, probably the most difficult season in my life, it didn’t feel natural to me to leave that way.

“Of course, also I’m staying because I still believe I can give so much to the team and I think the club believes the same.

“I’m very, very hopeful and excited to still win trophies here. It’s very special to be a player at this club and it’s even more special to win trophies and that’s why I’m here and all the players are here.”

The announcement of his new deal was not met with instant delight from everyone at the club,  Bruno Fernandes cheekily suggesting he was eyeing up Mata’s number eight shirt having previously worn the number at Sporting Lisbon.

Congrats brother!! Well deserved! An example and an inspiration on and off the pitch 🤩 @juanmata8 https://t.co/kziTxCVMIu

“[He needs to wait] At least another year!” said Mata.

“I think he’s happy that I’m staying and I’m happy to be playing with him. We’ve got a great relationship since he came and, of course, he’s been brilliant for us on and off the pitch. He’s also a great guy and an example for others. Unfortunately for him, he will have to be patient!”

See also – Jack Grealish is world class, but Man City may not be the ideal home for him