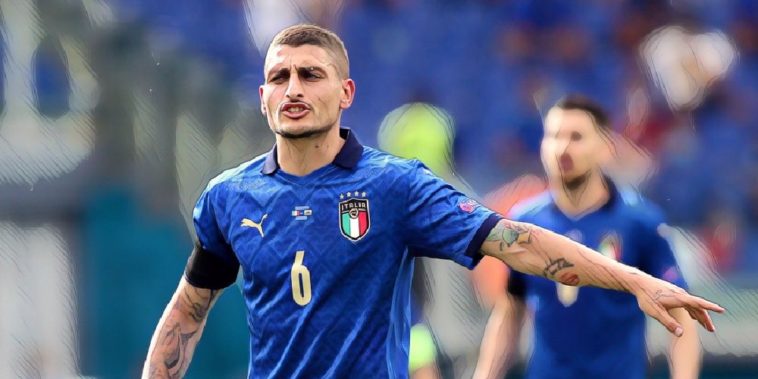 Italy star Marco Verratti has heaped praise on manager Roberto Mancini and has predicted an ‘epic’ Euro 2020 final on Sunday at Wembley.

The Azzurri have arguably been the star turn of the tournament thus far, coasting out of the group having picked up three wins without conceding a goal, before seeing off Austria, Belgium and an impressive Spain side in the knockout stages.

Mancini’s men are currently on a national-record run of 33 games unbeaten, form that is a far cry from what’s was previously a turbulent few years for the Italian national team, having failed to qualify for the 2018 World Cup.

The nation will now be preparing for its first major tournament final since 2012, where Italy were simply crushed by the mighty La Roja side under Vicente Del Bosque.

With England to come in this summer’s final, midfield star Marco Verratti has tipped the encounter to be an absolute ‘epic’, while also playing down the potential impact that a raucous home support at Wembley could have on the game.

“I think England did a great job. They got to the final for the first time and this says a lot,” said the PSG midfielder.

“They conceded only one goal, so it is a very solid team, great players, very balanced, and I think they did deserve to get to the final. Now it’s all down to the final, which I think will be an epic final, and history-making either way.

“England is a very physical team, and they have players who are very skilled as well. We will face a very, very tough team, they will be playing at home, they know the stadium well. But it is a dream for us to win this European Championship.

“Surely the supporters will factor in somehow, but we’re all professional players, we know what it is to play in fan-packed stadiums, and somehow this will drive us as well. We will be happy about it too – it’s great to play in a packed stadium.

“I think Italy-England is always a huge match. There will be only one winner and I hope it will be us. We will give it our very best shot.”

The Paris Saint-Germain midfielder went on to add that the Three Lions had perhaps been a tad fortunate in their semi-final win over Denmark, skipper Harry Kane having slotted home from the penalty spot at the second attempt in extra-time, after Raheem Sterling had been clipped inside the area.

The 29-year-old was also keen to praise the man who has guided Italy to the showpiece, Roberto Mancini, insisting that the former Manchester City boss is a ‘very special manager’ and the ‘perfect man for the job’.

“I think Mancini did a huge job,” he said.

“He did very well wherever he coached. He has been criticised, sure, but again, that’s part of the picture. If you don’t win, you will end up getting criticised, it goes for everyone, it is absolutely normal in football. Results are paramount, and when you don’t win, it’s easier to criticise the manager than the whole team.

“He’s done a great job with us, everyone can see it. He’s a very special manager for us, he boosted our confidence when we lost it because of the negative results of the past. I think he was the perfect man for the job.

“He restarted our enthusiasm, with his style we actually had fun. We haven’t lost in 33 matches – these are important statistics, and it tells you he is doing a great job. Sometimes one might say managers are not so important, but for us he truly is an added value.”

See also – Opinion: Jack Grealish is world class, but Man City may not be the ideal home for him