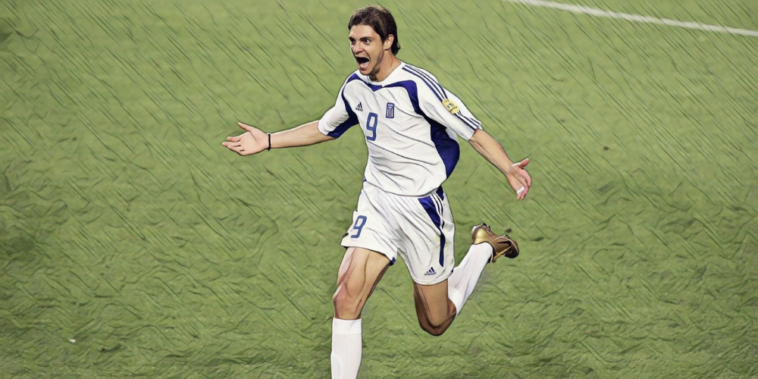 Greek culture has prided itself on being pioneers in multiple and wide-ranging fields, but success in football had proven elusive for a Mediterranean nation whose sporting history includes the formation of the Olympic games.

Greece had reached just two major tournament finals prior to the 2004 European Championship, reaching the same competition in 1980 and the World Cup in 1994.

Those ventures had delivered exactly no wins from six matches, losing five and taking just a single point.

Expectations were understandably slim ahead of a first major tournament appearance in a decade, with the bookmakers providing odds of 100-1 for the unfancied Greeks to return home with the trophy in Portugal.

Greece had qualified for the tournament as group winners after condemning Spain to the play-offs, including a 1-0 win in Zaragoza that saw Bolton summer signing Stelios Giannakopoulos score the game’s only goal.

Despite those successes however, there were few expecting Otto Rehhagel’s side to make a meaningful impact at the tournament proper.

Greece had the benefit of an experienced and tactically-astute head coach in the German, who constructed a side built on defensive discipline and aerial prowess, his game-plan built on nullifying the opponent and threatening on the counter and at set-pieces.

It was a plan that would cause a seismic shock across the European game, the organised underdogs ruffling the feathers of the continent’s elite nations.

Greece’s presence was felt immediately in the opening game of the tournament, stunning an expectant Portuguese crowed to beat the hosts in Lisbon, goals from Georgios Karagounis and Angelos Basinas securing their first ever major tournament victory.

Rehhagel’s resolute and robust side had shown they could stifle and frustrate even the game’s best, but to reach the latter stages of the tournament Greece needed a player capable of proving the difference at the opposite end.

In Angelos Charisteas, Rehhagel had the perfect player.

Charisteas arrived into the tournament as a Bundesliga title winner following Werder Bremen’s domestic double-winning season in Germany, though he had scored just four league goals after struggling to build on a promising debut season with the club the previous year.

In Rehhagel however, he had a coach who would maximise his talents with the hulking frame of the Greek forward providing the national side with the domineering focal point to execute their tactical plan.

His first major contribution came in the second group fixture against Spain, cushioning a long pass before firing low under the goalkeeper to cancel out Fernando Morientes’ equaliser and leave Greece on the brink of reaching the knockout stages.

Portugal’s victory over Spain ensured Greece progressed by the narrowest of margins following defeat to Russia in their final fixture, moving into the last eight on goals scored after finding themselves level with the Spanish on both head-to-head and goal difference.

Their reward was a quarter-final with holders France, Les Blues having progressed from a group containing England as winners and a side boasting world-class talents in Zinedine Zidane and Thierry Henry.

The result was a narrow 1-0 win for the Greeks, a triumph for the collective over the more individually capable, as the rank underdogs stunned the reigning champions with Charisteas the protagonist of their success.

France could hardly say they hadn’t been warned, Rehhagel’s side versatile in their ability to stifle opposition with tactical tweaks whilst relying on height and robustness to threaten when venturing forward.

It is perhaps unforgivable then, that the towering Charisteas found himself free inside the penalty area to thunder home Theodoros Zagorakis’ cross and continue his nation’s fairy-tale into the latter stages.

The game-plan was executed once again in the last four as Greece halted a free-scoring Czech Republic side in their tracks, the tournament’s leading scorers frustrated as Traianos Dellas nodded in an extra-time winner to send the Greeks through via the Silver Goal ruling.

Greece were implausibly into the tournament’s final and a rematch with Portugal awaited.

Portugal had recovered from their shock opening defeat to progress to the final in fine fashion, eliminating both England and the Netherlands as a side containing the likes of Luis Figo and a teenage Cristiano Ronaldo sought to make history.

Reaching a first major final on home soil and faced with a side regarded as rank outsiders pre-tournament, this was viewed as the perfect opportunity to end a nation’s long wait for success.

The fairy-tale, however, belonged to Greece.

Even upset after upset had not been enough to reduce the magnitude of Greece becoming champions of European football, a shock of gargantuan proportions that reached its pinnacle at Lisbon’s Estádio da Luz.

The final proved a tense affair as Portugal’s flair was matched by Greece’s industry and effort, the host nation frustrated as their spirited opponents pressed aggressively before dropping deep into defensive lines.

Then the defining moment, a fraction of time in the 57th-minute that ensured Angelos Charisteas joined the likes of Achilles and Hercules amongst the pantheon of immortal Greek heroes.

Basinas’ corner-kick delivery is met by the head of the Greek number nine, outmuscling Ricardo Carvalho and Costinha before powering the ball into the back of the Portuguese goal.

It was incredibly Greece’s first corner and first shot on target of the contest, a goal which hit Portugal like a lightening bolt from Zeus and sparked an eruption of ecstasy from the Greek contingent behind the goal.

Portugal huffed and puffed but there proved no way through the resistance from Rehaggel’s side, the host nation waiting for a moment of inspiration from one of their marquee talents that ultimately never came.

Disbelief swept the stadium as the full-time whistle was blown, Charisteas mobbed by white shirts as the ultimate underdogs completed a footballing miracle in the Portuguese capital.

It was a moment that the forward admitted changed his life forevermore.

Theodoros Zagorakis was named as Player of the Tournament after captaining Greece to success, but it is Charisteas whose match-winning contributions are forever etched into European Championship folklore.

Following the tournament he spent a further season with Werder Bremen before signing for Ajax as a replacement for Zlatan Ibrahimovic, though the hero of Greece’s greatest triumph was never an ideal successor to the mercurial Swede.

He was however, the perfect protagonist of perhaps European football’s most stunning shock, a player who embodied the team-first approach of Greece’s grafters to become a key cog in a team far greater than the sum of its parts.

It may not have been a triumph for the footballing purists, but it was undoubtedly an execution of tactical perfection. Angelos Charisteas ensured Greek football scaled the heights of Mount Olympus in the summer of 2004.