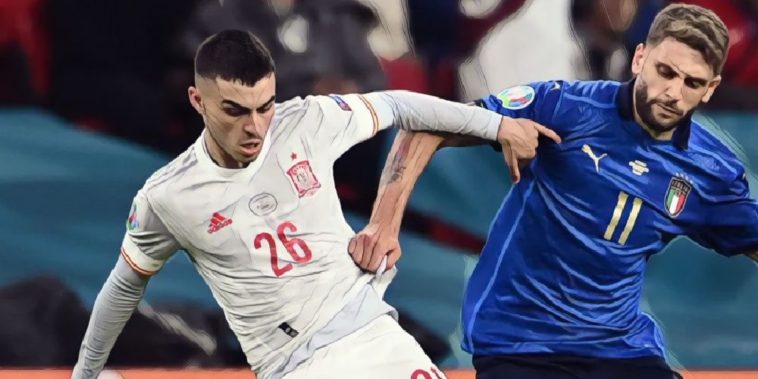 As expected, the Euro 2020 semi-final’s didn’t disappoint, as England and Italy progressed after two nights of thoroughly engaging tournament football at Wembley.

Roberto Mancini’s side fended off an impressive, youthful Spain to reach the showpiece, clinching their place in the final on penalties following Alvaro Morata’s decisive miss, the Juventus striker having previously drawn his side level in normal time following Federico Chiesa’s opener.

The following evening, the Three Lions made the most of home advantage to scrape past a resilient Denmark side after extra-time, with a rebounded Harry Kane penalty proving the difference after Raheem Sterling had cancelled out Mikkel Damsgaard’s first half free-kick.

Here are the standout showings from those semi-final ties.

A World Cup and European Championship winner, Sergio Busquets is no stranger to the big occasion and produced a typically brilliant display against Italy on Tuesday night.

The Barcelona man has come under fire in recent years amid the club’s struggles, yet the veteran midfielder proved as ever why he is simply one of the best of all-time in his position, serving up a midfield masterclass at Wembley.

Deployed at the base of the midfield, the 32-year-old was his usual cool and composed self, not appearing to get flustered by the relentless press of the opposition and continually finding his teammates with incisive forward passes.

In an at times frantic and frenzied encounter, his measured approach was invaluable to Luis Enrique’s side, as he allowed the young guns ahead of him to do the running, all while keeping himself free and available to receive the ball in the centre of the park.

Despite their midfield dominance, La Roja’s wastefulness in attack ultimately proved to be their downfall, with Busquets left with nothing to show for yet another strong big game display.

When England needed their captain, Harry Kane delivered, slotting home what proved to be the matchwinner at the second attempt to send Wembley into hysterics.

It’s safe to say that he was nowhere near his best in the group stages, nor in fact for much of the win over Germany, yet, in truth, that is now immaterial, the Tottenham man having caught fire in the knockout phase.

Buoyed by his late header against the Germans and his clinical brace against Ukraine, the 27-year-old produced by far his most impactful performance of the tournament against Denmark, leading the line superbly against a fearsome opposition backline.

56 – @England had 56 touches in the Denmark penalty area last night, a tournament record since this data is available (1980+). Sterling (15), Kane (9) and Mount (7) all had more touches in Denmark's penalty area than the entire Denmark team had in England's (5). Territorial. pic.twitter.com/8PxV3wWvCo

Chances may have been few and far between, yet it was his hold-up play that was most impressive, the forward showcasing the type of form that saw him top the charts for both goals and assists in the Premier League last season.

His heart may have been in his mouth when his penalty was initially saved, yet he had the composure to bury the rebound, becoming the joint-top scoring Englishman in major tournament history in the process.

Not only does he have the opportunity to add to that on Sunday, as well as stake a claim for the Golden Boot, he could also be the first England captain since Bobby Moore to lift a major trophy.

The man who initially denied Kane from the penalty spot, Kasper Schmeichel did all he could to thwart England on Wednesday evening, producing another immense Wembley performance.

The iconic stadium seemingly brings the best out in the Leicester City man, having pulled off heroics to help the Foxes to a maiden FA Cup win under Brendan Rodgers less than two months ago.

After Mikkel Damsgaard had given Denmark the lead with a stunning free-kick, Schmeichel then produced a pivotal stop from point-blank range to deny Raheem Sterling, leaving England fans with that feeling that it could just be one of those nights.

Despite an equaliser moments later, that feeling was intensified after the 34-year-old somehow clawed a goalbound Harry Maguire effort out, while he also denied Kane from the angle, as the Danes hung on into extra-time.

Although there was the eventual winner from the England skipper, Schmeichel was unfortunate to see the ball squirm away from his grasp after an initial good diving stop and will take pride in being one of few to have denied the Spurs striker from the penalty spot.

He’s no doubt at times been burdened by the career of his father, Peter – who helped Denmark to shock success at Euro 1992 – yet the younger man has forged an excellent career in his own right and is rightly recognised as a brilliant goalkeeper.

Another man stepping out of the shadow of his parent, Federico Chiesa and his father Enrico are the only father and son combination to have both netted at a European Championship’s, the latter having done so at Euro ’96, while the current Juventus star has now done so twice at Euro 2020.

Unlike his father, however, Federico will be looking to help Italy to tournament success this weekend, after playing a pivotal role in their semi-final triumph.

The 23-year-old has had to earn his place in Roberto Mancini’s starting XI due to the form of Domenico Berardi on the right-flank, although he appears to have won that battle with some impressive displays in the knockout stages.

🗣️ "I cannot describe my emotions in words…We're coming back here [to Wembley] on 11 July and we'll see."

Against Spain, the winger was a constant threat on the break and simply doesn’t allow the opposing full-back a moments peace, such is his relentless desire to press.

With both Lorenzo Insigne and Ciro Immobile struggling to make an impact, Chiesa was the real outlet in the attack and put his side ahead with an excellent curling finish that sailed past a helpless Unai Simon.

With England to come on Sunday evening, it should be an intriguing battle up against Luke Shaw, the Manchester United man likely not looking forward to facing the hardworking forward.

Arguably a shoo-in to collect the young player of the tournament award, Barcelona starlet Pedri has been one of the breakthrough stars of the competition and a pivotal part of Spain’s run to the last four.

Such has been his smooth transition to a first major tournament, it’s almost easy to forget just how young he actually is, the 18-year-old having only made his international bow back in March against Greece.

What’s most impressive is his level of consistency, the teenager having not dropped his standards in any of his six starts in the tournament, with breakthrough stars of his age usually enduring the highs, lows and inconsistencies that come with being thrust into the thick of international football.

🇪🇸 Another flawless performance from Pedri at the semi-finals 👏

Against Italy, especially, the former Las Palmas youngster was simply remarkable, oozing class and giving some senior members in the opposition midfield the run-around, despite the obvious pressure of such an intense game.

He not only provided the creative force for Luis Enrique’s side, but did so without squandering possession, finishing the 90 minutes with a staggering 100% pass completion rate and only eventually misplacing two passes in extra-time.

Faced with a fluid and dynamic Spanish attack, the Italian defence had a real job on their hands at Wembley, yet Leonardo Bonucci rose to that challenge, putting in an inevitably rock-solid display to help his side reach the final.

One of the pleasures of this tournament has been witnessing the partnership of the Juventus man and his club teammate, Giorgio Chiellini, the two men using every ounce of their experience to drag this Roberto Mancini’s side through.

That’s not to say that Italy are a solely defensive team, far from it, but the veteran duo provide the Azzurri with a gritty core and a passion that you can’t help but admire, their love of turning out for their country still burning despite the 219 caps between them.

In the semi-final, in particular, it was Bonucci who lead the way, coping the better of the two against the youthful exuberance of the Spanish, who were perhaps unfortunate not to have got more out of the game.

In extra-time, in particular, the 34-year-old helped marshal the backline to withstand the pressure, while he also went on to inevitably fire home from the penalty spot, as Italy claimed a shootout win and exact revenge over a country who had torn them apart in the showpiece in 2012 – a game that Bonucci featured.

Much of the plaudits for England’s semi-final have gone to skipper and match-winner Harry Kane, although the real star of the show was once again Raheem Sterling, who can simply do no wrong at present.

An unpopular inclusion in the starting XI at the start of the group stage, the Manchester City man has surely turned doubters into admirers, having produced a string of stunning displays to help catapult the Three Lions to the final.

When Kane and others were struggling for form, Sterling took charge in the opening few games and appears to have even raised his game in the knockout stages, the player benefitting from what many deemed to be misguided trust from Gareth Southgate.

The support and energy from all the fans have been incredible both at Wembley and everyone watching at home. Bring on Sunday under the arches ❤️🏴󠁧󠁢󠁥󠁮󠁧󠁿 pic.twitter.com/KqhXHflaNa

As the England boss has stated, however, the 26-year-old is an exceptional talent and has arguably been the nation’s best player post-2018, shaking off what had been an underwhelming tournament for the forward in Russia.

Against Denmark, from the word go he was a constant menace, driving at the defence and offering a real threat on either flank, while also applying the pressure in the build-up to Simon Kjaer’s unfortunate own goal.

Yes, there was that inexplicable miss just beforehand where he fired straight at Schmeichel, but he more than made up for that late on, winning a decisive penalty after a surging run into the box, while also continuing to offer a threat on the break in the closing stages.