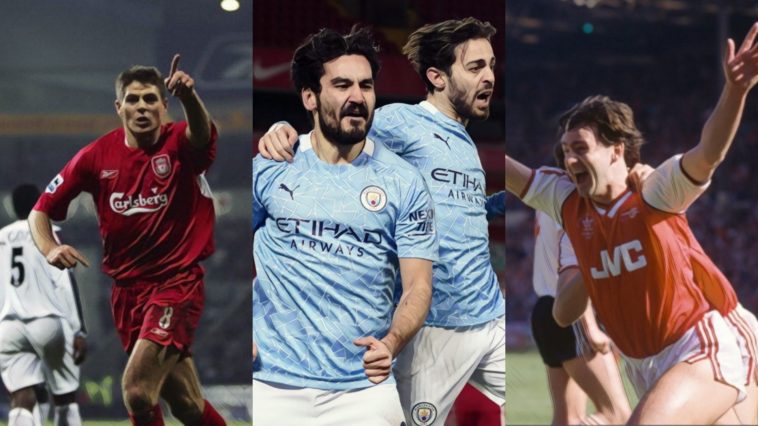 It has gone a bit under the radar, but a Premier League club just broke the record for the longest winning run in English football.

Manchester City took the record following their win over Swansea City in the FA Cup on Wednesday night, taking them above some historic teams of the past.

The club’s recent good form has seen them rise to the summit of the Premier League table and advance to the last eight of the world’s oldest cup competition for the fourth time in five years.

With Pep Guardiola’s side playing so excellently of late, they could be on the verge of a truly special season. Who says they won’t win it all this year?

Between 17 August and 28 September 1985, Manchester United won 11 games in all competitions, 10 of which came at the beginning of the First Division campaign with the other victory coming in the League Cup.

Man United didn’t drop points until drawing at Luton Town in October and didn’t lose a game until November when Sheffield Wednesday beat them by a goal at Hillsborough.

United went on to lose another nine games that season and, in what is considered one of the greatest bottle jobs in English football history, failed to secure the league title. Manager Ron Atkinson was sacked soon after and replaced by Alex Ferguson.

The longest unbeaten runs in the history of English league football

On not one but two occasions Liverpool won 11 matches in a row on the domestic front, and both times they won nine of them in the league and two in the FA Cup.

The first came between 18 February and 11 April 1989 under the management of Kenny Dalglish to rekindle their title challenge, which ultimately came undone by eventual champions Arsenal.

The second occurred between 15 March and 7 May 2006 under Rafael Benitez, pushing Liverpool into the top four and the FA Cup final. The streak ended when they drew 3-3 with West Ham in the decider, but they of course won on penalties.

The best FA Cup deciders ever: Comebacks, shocks and the Five Minute Final

Going all the way back to the nineteenth century, Aston Villa won 11 consecutive games in all competitions between 20 March and 18 September 1897.

The Birmingham outfit won the double that season, winning their final five league games to finish top before beating Liverpool and Everton in the semi-final and final respectively. They went on to win their first four matches of the following campaign, but couldn’t run it back, finishing sixth in the table.

A year of darkness: The pain of losing three Aston Villa legends in 12 months

The first ever English team to put together a winning run of more than ten matches, Everton won 12 games in a row between 24 March and 13 October 1894. All of them came in the league.

The streak, which crossed over two different seasons, was not enough to see them win the league title. After beating Liverpool 3-0 they lost the following game 4-3 to Blackburn and finished second in the table behind Sunderland.

One of the great English football teams of the past, Tottenham Hotspur won 13 games in a row between 23 April and 1 October 1960. All of them came in the league.

Spurs’ streak was bookended by two wins over Wolves and saw them set a record of 11 straight wins at the start of a league season.

By the end of the 1960/61 campaign the Lilywhites had won the League and FA Cup double, something that had not been achieved since the aforementioned Aston Villa team of 1897.

The previous holders of the record for the longest winning streak, Arsenal won 14 games in a row in all competitions between 12 September and 17 November 1987. Ten of these came in the league while the other four were in the League Cup.

The Gunners went top of the table in mid-November after winning ten matches in succession, although they finished behind eventual champions Liverpool, who didn’t lose any of their opening 29 league games.

Arsenal did reach the League Cup final amidst this run, although the lost the decider to Luton Town. They would go on to win the First Division title the following season, however.

Before Arsenal went an entire Premier League season unbeaten in 2003/04, Preston North End were the original Invincibles. The Lilywhites went undefeated in the 1888/89 season, but that wasn’t the only record that famous team set.

Preston were also the first team to do the league and FA Cup double, winning the latter without conceding a solitary goal. They also became the first team to retain their title after running it back in 1890 and hold the record for the biggest FA Cup win when they beat Hyde 26-0 in 1887.

In the 1891/92 they managed another remarkable achievement when they went on a 14-game winning streak in all competitions. It began on 3 October 1891 with a 3-0 win over Wolves and ended with a 2-0 defeat to Nottingham Forest in the FA Cup on 13 February the following year.

Despite the defeat, they set a new record in their very next fixture when they beat Derby County 3-0, their 13th league win on the bounce. Remarkably they did not win the title that season. It instead went to Sunderland, who equalled that winning streak a month later. The Black Cats scored an incredible 93 goals in 26 matches on their to a first-placed finish.

That record of 13 consecutive league wins stood for an astonishing 125 years until Man City broke it in 2017.

The 28 November could be viewed as a turning point in Manchester City’s season. That day they thrashed Burnley 5-0 in response to their 2-0 defeat to Spurs a week earlier. Consecutive draws against Manchester United and West Brom subsequently stifled progress; at that point they had failed to win more league games than they had actually won (5W-4D-2L).

From 19 December onwards, however, they have been an unstoppable winning machine, beginning with a slender win over Southampton. Ten of their wins during this run have come in the Premier League, the highlight being a 4-1 win over reigning champions Liverpool. The other five have come in cup competitions, in which they are currently undefeated this season.

Despite the rocky start to their season, which saw them lying 13th in the table as recently as late November, they have only suffered two defeats domestically in the entire campaign. During this run of wins they have scored 40 goals, but the bedrock to their excellent form has been the defence, which has conceded just five goals. That’s 0.3 goals allowed per game.

It’s unusual for teams to win so many times in a row, indeed no one in English football has done it to the extent Man City have. The congested schedule has been a headache and a hindrance to many, but perhaps with City’s deep squad it has been conducive to keeping the momentum going.

On two previous occasions Man City have accumulated 15 or more consecutive wins in the Premier League; in 2017 they set a new record of 18 straight league wins, and in 2019 they went 15 games without dropping a point in the league between February and August.

To paraphrase Skip Bayless, all they do is win.

See Also: FPL Podcast: The best double gameweek players to own in GW24