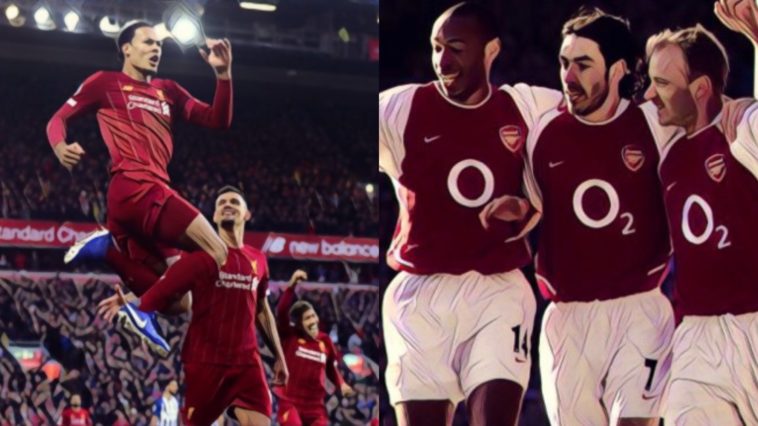 Liverpool wrote their name in the history books this season after going on a sensational run of form.

The Merseyside outfit are bidding to win their first league title in 30 years, which would put an end to decades of near misses and heartbreaking collapses. They won’t emulate the Invincibles by going an entire season undefeated, although one would assume the Reds faithful would be happy just to get over the line for once, no matter how they do it.

There had been one year, one month and 27 days between Liverpool’s last defeat to Manchester City in January 2019 and their shock loss to Watford in February 2020. Having won 26 matches so far this season, they are just six victories away from matching the Premier League record for most wins in a season (32), which was set by that very same Man City team.

Looking beyond the so-called modern era of football from 1992 onwards, how does this Liverpool team compare to some of the most unbeatable of the past?

Leeds United last top flight title win was more recent than Liverpool’s, although the Whites are currently in the Championship, having spent 16 years outside the Premier League. They might very well finish this season on top of the second tier table though, meaning both clubs could win silverware by the end of the campaign.

The Yorkshire outfit’s first title came 51 years ago, when they lost just two games in the entire campaign. The club had been the nearly men for several years, but the season beforehand they finally felt the warm glow of glory by winning the League Cup and Inter-Cities Fairs Cup.

That inspired them to league success the next year, with manager Don Revie proclaiming to his squad in pre-season that “You are going to win the championship this time, lads, and what’s more you are going to do so without losing a single League match!”

Revie was almost right, but his switch from an unattractive, defensive style to a more attacking approach made all the difference. “A policy of free expression by the players,” the famous manager called it. With the likes of Johnny Giles, Billy Bremner and Jack Charlton in the team, they were almost unbeatable, finishing six points ahead of Liverpool.

Faustino Asprilla – The mercurial Colombian who win matches on his own

When Jose Mourinho arrived at Stamford Bridge in 2004, he quickly turned Chelsea into an unstoppable winning machine. His first league defeat at the South West London club came in October when they lost 1-0 to a pre-petrodollar Man City, before going undefeated for 12 months and three weeks.

That run was finally ended by Man United in the 2005/06 campaign, although the Blues won the title in both seasons. Assuming Liverpool’s outstanding run of form continues, they will be bumped down this list very soon.

Five players with the most Premier League wins ever

Leicester City‘s remarkable title win in 2016 is, for obvious reasons, lauded as one of the greatest fairytale stories in the history of the sport. But there may not be another tale in English football that could possibly match that of Nottingham Forest in the seventies.

The East Midlands outfit were a middling second tier team until Brian Clough took over, leading the club to promotion in 1977, before incredibly winning the First Division the very next year. If that wasn’t enough, they went on to win the European Cup the next season. And again the one after that.

It’s the kind of singular achievement, produced purely with British and Irish footballers such as Peter Shilton, Martin O’Neill and Archie Gemmill, that will never be repeated ever again. In between it all they set a top flight record for consecutive games without defeat that wasn’t bested until Arsenal in 2004.

The only lower league team in this list, Huddersfield Town went undefeated from the 1st of January until the end of the season in 2010-11, avoiding defeat for 25 games. Somehow, they didn’t earn automatic promotion from League One to the Championship, finishing five points behind second-placed Southampton, meaning they had to manoeuver the unforgivable playoffs.

The Terriers had to contend with Bournemouth, managed by Eddie Howe, and won on penalties following a thrilling 3-3 after extra time. Having drawn both legs of the semi-final, they didn’t lose in 90 minutes for 27 straight matches leading into the playoff final, but they were hammered 3-0 by Darren Ferguson’s Peterborough United at Old Trafford.

Huddersfield didn’t lose another match in the league until November, when they were downed by Charlton Athletic. Like buses, another defeat followed immediately – to Bournemouth. After losing just twice in 2011, they did, at least, earn promotion via the playoffs in 2012, beating Sheffield United in a penalty shootout at Wembley.

The only time Liverpool tasted defeat in the league in the entirety of 2019 came back in January of last year, when they fell 2-1 to Manchester City at Eastlands. Coincidentally, it was their only defeat of the season and ended up costing them the league title by a single point.

The Reds got back on the horse nine days later with a 1-0 away win over Brighton, and ended the season on a nine-game winning run. They continued that stellar form into this season, winning 26 and drawing one of their opening 27 fixtures – the first time any team in one of Europe’s top five leagues has ever done so.

Five of the best Premier League title races of all time

And way out in front, it’s none other than The Invincibles, who became just the second team in the history of top-flight English football to go an entire league season undefeated, Preston North End in 1888/89 being the other.

Arsenal‘s run went beyond just a season though, refusing to lose for a whopping 49 games. Arsene Wenger’s side were stopped just short of the half-century, however, by none other than their arch-nemesis, Man United.