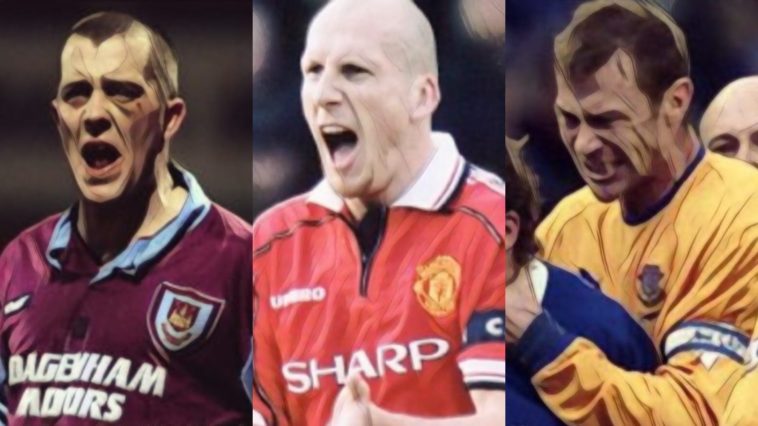 How do you define what it means to be a hard man? What makes someone authentically tough? And is that definition any different for footballers and sports people in general? Why are some players considered tough bastards and others not?

Members of this parish attempted to answer these questions last year in an hour-long discussion about some of the game’s hardest players ever. There was some consensus; there are those who can take it as much as they give it, who will meet challenges, both physical and mental, head on, while there are some who, on the face of it, come across as fierce and hard-nosed but are really just putting on a show.

Roy Keane is the most classically designated hard man in the history of the Premier League, and there is no doubting that he was a tough nut. But certain cowardly acts, such as the horrendous career-ending ‘tackle’ on Alf Inge Haaland, and his refusal to mend fences face-to-face with Jon Walters and subsequent comments about the player mean he drops out of the running.

Some might consider Diego Costa a tough character, but his engagement in acts of skulduggery and shithousery preclude him from the conversation. What the likes of he and Luis Suarez do on a regular basis are not in the spirit of football’s hard men. We’ve attempted to collect a list of what we consider to be resolute, teak tough footballers, although this list is by no means exhaustive.

Five of the hardest footballers to ever grace the British game:

A West Ham United legend of the nineties, Julian Dicks was a genuinely unique player. The Bristol-born behemoth played at full-back, was a set-piece specialist and possessed one hell of a left foot that he would use to blast penalties into the net. But he was also the hardest footballer to grace English football in the nineties.

Dicks willingly acknowledges that he has a reputation for being “dirty”, but maintains that he should be known for being a “hard but fair” player – he never engaged in the sneaky stuff, preferring to smash you in the mouth rather than stab you in the back. And god help you if you got on his bad side.

Dicks’ most infamous incident came over 24 years ago in a game versus Chelsea, when the defender stamped on John Spencer’s head and caused a nasty gash around his ear that required stitches. It was so bad that his own daughter was attacked at school over it, while Harry Redknapp clashed with him on the training ground. Dicks claimed he didn’t do it on purpose, which Spencer himself backed him up on.

“The Hammer from Hell” was more than a mere shithouse, though, possessing genuine footballing ability. Although a move to Liverpool in 1993 didn’t work out, he was close to a call-up for the England squad ahead Euro 96, but the call never came. Glenn Hoddle’s assistant John Gorman supposedly told the shaven headed Dicks he would have a better chance of playing for the national team if he grew his hair out.

Maybe it was just the bald head, but Jaap Stam was one of the meanest looking footballers to have played in the Premier League. The Dutchman, who had a huge physique, wasn’t just a hard man, but a player with a great defensive mind and impeccable timing when it came to the art of tackling.

When Stam was asked if he was a hard man in an interview in 2012, he answered: “A player recently came at me with a head-butt, so I grabbed him and put him in a head-lock. He looked a bit blue when I let him go.”

Man Utd could do with Jaap Stam at the moment 😳pic.twitter.com/tyrXtMqR4B

That answers that then. With his menacing glare and penchant for crunching tackles, absolutely no one wanted a piece of the former Manchester United defender, who won three Premier League titles and the Champions League during his spell at Old Trafford.

Five of the Premier League’s hardest men ever

The top-scoring Scotsman in the Premier League era, Duncan Ferguson carved out a reputation for himself as both a dangerous striker and a dangerous opponent during his career.

The former Everton and Newcastle United forward holds the Premier League record for the joint-most red cards alongside Richard Dunne and Patrick Vieira, receiving his marching orders eight times, but his notoriety as a genuine hard man stems from two incidents outside of football.

Twice in the span of two years Ferguson’s home was burgled and on both occasions he confronted the burglars, one of whom he detained and the other he hospitalised.

#OnThisDay in 2000, Duncan Ferguson scored THIS volley in our 3-0 win against Man United.@alanshearer also scored two that day 👌⚫⚪ pic.twitter.com/ZJ8qkkKoRk

Big Dunc’s aggression both on and off the pitch went too far on occasion; he has four convictions for assault to his name, one of which resulted in a three and a half month jail term after he headbutted Raith Rovers defender John McStay in 1994 while playing for Rangers.

The current Everton assistant manager was more than just a brute, however, winning the FA Cup with the Toffees and scoring some delightful goals throughout his career.

When it comes to Gennaro Gattuso, the question must be asked: was he a genuine hard man or just a few nuts short of a Snickers? The answer, in truth, is that he is both.

The defensive midfielder was always a bit off his rocker, as detailed in Andrea Pirlo’s autobiography where he explained how ‘Rino’ would attack teammates with forks. To be fair to the Italian, he didn’t do this out of bloodlust, but as retaliation for Pirlo and co attempts to wind him up and play pranks on him.

The two AC Milan legends formed a dynamic midfield pairing for club and country nonetheless, with Pirlo the more sophisticated, technically gifted one, while Gattuso was the hard-working and tough-tackling general in the centre of the park who never shirked a challenge, or a fight for that matter.

It’s nine years to the day since Joe Jordan and Rino Gattuso went toe-to-toe at the San Siro.

Early on in his career the diminutive midfielder had a brief loan spell at Rangers, where he is still deemed something of a cult hero around Ibrox.

Faustino Asprilla: The mercurial Colombian who could win matches on his own

It would be remiss of us to compile a list of some of the hardest football men to have graced the sport without mentioning a player from the old school era, when you needed to be genuinely tough in order to survive and thrive. There are so many we could have chosen, from Ron ‘Chopper’ Harris and Billy Bremner to Joe Jordan and Terry Butcher, but we’ve gone for Johnny Giles.

The Irishman, whose game was not defined by violence or aggression, was a fine footballer who possessed incredible ability on the ball. He played a key role in the famous Leeds United team that won the First Division title in 1969 and 1974, as well as reaching the European Cup final in 1975.

But Giles was a short man, gifted with nifty technical skills, but that made him a target for the rough, no-nonsense defenders of the time who loved nothing more than putting one in on an opposition attacker. To combat this, Giles gave as good as he got, taking zero bullshit from the moment he stepped onto the pitch. In his own words, he had to become “a lion rather than a lamb”.

Perhaps his most infamous hotheaded moment came in the 1974 Charity Shield against Liverpool, in which he punched Kevin Keegan. He recently said that Keegan seemed to be “in a bit of a mood” that day and generally getting on everyone’s nerves, so he took a shot at him during the match. Remarkably, none of the Liverpool players caused much of a fuss about it and the referee didn’t even send him off.